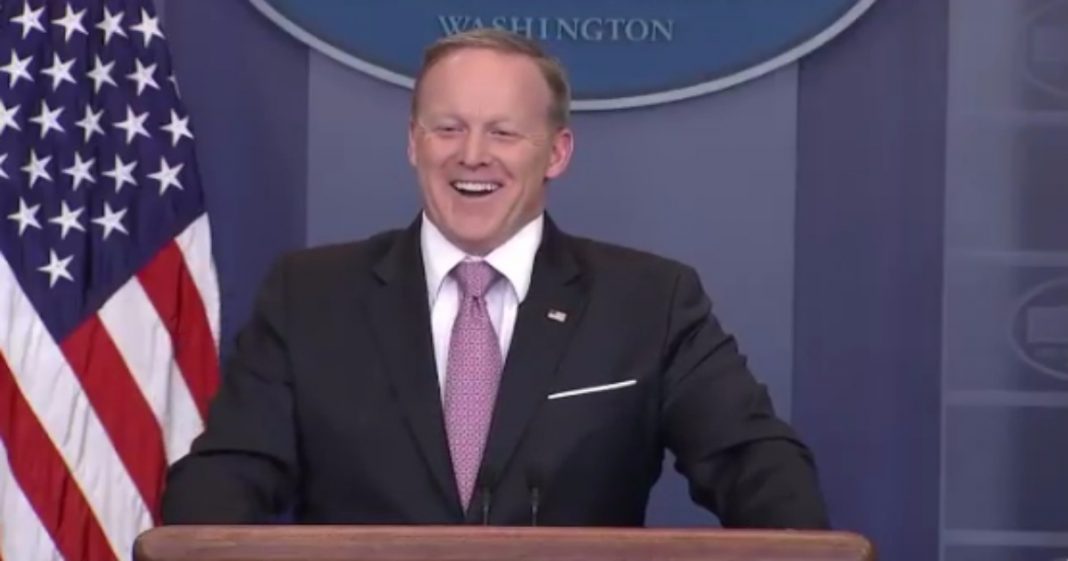 During his daily press briefing on Friday, White House Press Secretary Sean Spicer fielded a question about the newly-released jobs report, saying that while the POTUS considered Obama-era reports to be “phoney,” the new report’s positive numbers are “very real.”

Spicer was asked by CNBC‘s Washington Reporter Eamon Javers whether or not the president considered the latest jobs report released on Friday to be legitimate considering he has called past reports during the Obama Administration “fake” and inflated.

Giggling, Spicer relayed a quote directly from the POTUS in response:

“Yeah, I talked to the President prior to this and he said to quote him very clearly, ‘They may have been phony in the past but it’s very real now.'”

Rather than viewing that statement for what it was – a chilling admittance that the President bases his reality on ego and political convenience – Spicer and many in the White House press pool giggled.

Of course the “joke,” only works if all involved acknowledge the very fact that Trump has outright lied and misled his supporters concerning past reports. What a sad state of politics when the punchline of a joke in the White House is how much of a thin-skinned egomaniac the man on top is.

Not to mention the fact that any job reports coming in this soon into Trump’s presidency are almost completely the fault or to the credit of President Obama. Unlike when Trump claimed that his failed Yemen raid was the fault of Obama, Trump simply cannot take credit for economic boosts less than two months into his presidency.

Still, at least this signals the beginning of the Trump accountability era – or the slow door closing on the amount of times that Trump and Republicans can blame Obama for every bad thing that happens while taking credit for the good. Eventually, for better or for worse, anything that happens will be squarely on Trump’s shoulders.

JUST IN: Asked by @EamonJavers about Trump’s view of jobs report, Spicer says “they may have been phony in the past, but it’s very real now” pic.twitter.com/K93Pga8H0c