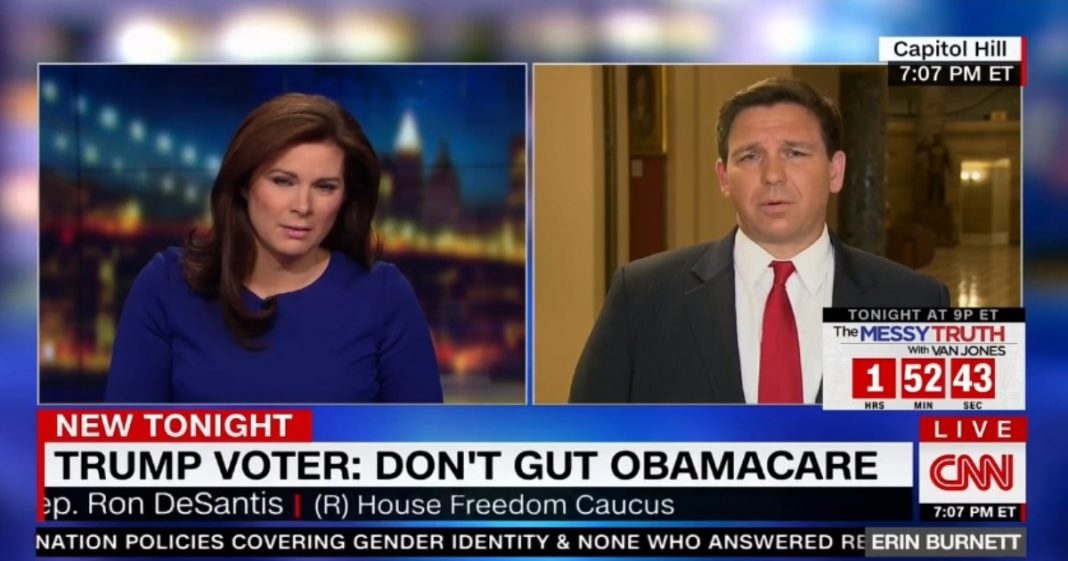 According to Florida Congressman Ron DeSantis, the idea of millions of people losing access to health insurance isn’t a big deal – even if they have cancer – because worse come to worse, they can just go to the E.R.!

Speaking to CNN’s Erin Burnett, DeSantis said that he felt the healthcare replacement didn’t go far enough in booting off Americans from having access to healthcare coverage, and that we should really view the emergency room as a more viable resource for Americans.

But DeSantis wasn’t just speaking about Americans with cuts and bruises – instead, he was suggesting that even Americans currently having their cancer treatments covered by the ACA might be able to use the Emergency Room as a cancer treatment center.

Burnett asked DeSantis how his healthcare views applied to a Republican named Tiffany who had the ACA to thank for her cancer care.

“I would say though, and people who supported Obamacare used to make this point a lot before it passed, there really is no lack of health care. If people really need it, they show up to the emergency room, they do get care, it just gets passed on to other folks.”

In one way, DeSantis is correct – as a last resort, the E.R. is available to any American in need. But that does not mean that most feel it is a good source for medical care, and if you can afford it, the costs to cover your E.R. visit are often astronomical. But the most offensive part of DeSantis’ tonedeaf statement is that it was made in response to a cancer victim’s needs – no matter how hard you try, the E.R. will not lead to the oncology ward. If we make it hard for cancer victims to have access to their treatment, and make it too expensive to cover, people will die.

The idea of an uninsured sick person using the E.R. as their regular healthcare spot is exactly what measures like the ACA are seeking to prevent, especially because often, the cost of these visits are passed on to the taxpayer. If they aren’t we are stuck with more Americans going bankrupt over medical costs – neither of which should be a goal of any healthcare proposal.