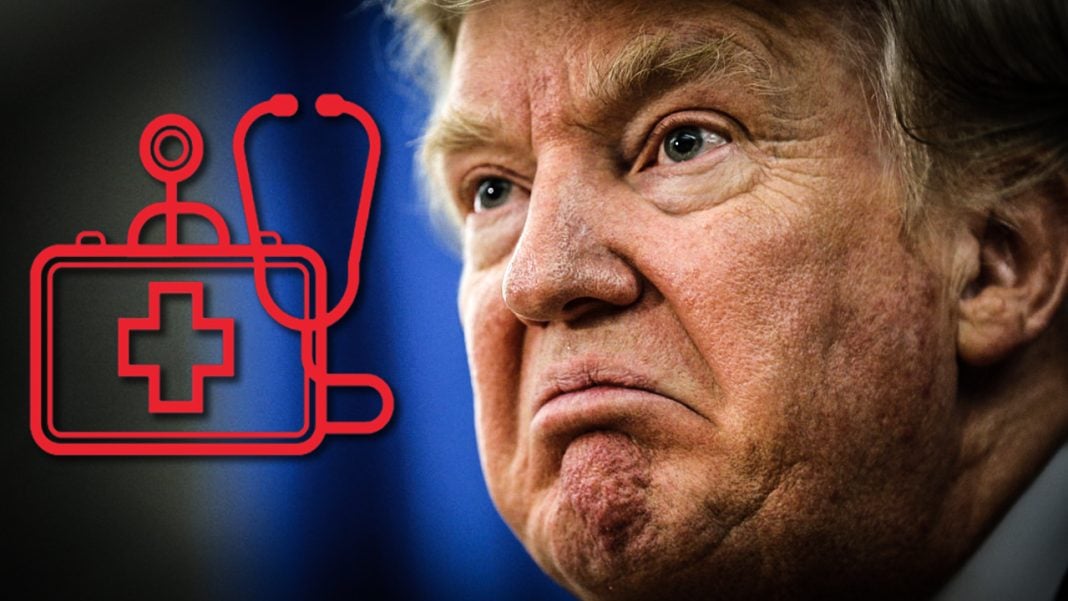 Donald Trump told a group of conservative leaders gathered in the Oval Office this week that if it turns out the GOP’s replacement healthcare legislation screws up the country, he’ll just blame the Democrats for it.  How stupid does he think the public actually is? Ring of Fire’s Farron Cousins discusses this.

Earlier this week, at a meeting in the Oval Office with conservative leaders, Donald Trump assured these people gathered in that office that if the American Healthcare Act fails, he’s just going to go ahead and blame the Democrats. He’s not talking about if it fails to pass. Republicans have the numbers to do that. He’s talking about if it gets implemented and then turns out to be a massive failure, which it will be, we’re just going to blame the Democrats. To anyone who actually supports Donald Trump, do you really want to still say that you support a man who thinks that you’re an idiot? Because you would have to be an idiot at this point to honestly believe that any failures included in this healthcare package belong to the Democrats.

It takes a special kind of stupid to actually believe that a bill drafted in secret by only Republicans is somehow the Democratic Party’s fault. To be honest, Donald Trump is just laying out what the rest of the GOP already plans to do for the 2018 elections and beyond that. They’re going to hang all of the failures of their stupid little healthcare plan on the Democratic Party. They’re going to blame them. They’re going to say, “Well, they didn’t want to work with us, so we just had to push forward with this horrible piece of legislation. They wouldn’t give us input,” which is a lie, but the Republican base is not intelligent, so they’re going to believe it. That’s what we’re going to see play out for the next few years.

Here’s another thing. Here is why Donald Trump is already talking about the possibility of this piece of legislation being a massive failure. Hospitals, doctors, nurses’ associations, health insurance companies, senior citizens, even Republican Congressman and Senators have all come out and said that this legislation is bad. Across the board, everyone hates the American Healthcare Act. They do not like Trumpcare. They do not want Trumpcare. They want their Obamacare, but they want it to be a little better. You could fix that piece of legislation instead of throwing it in the toilet and coming up with this new piece of legislation that you’ve scribbled down in what looks to be about 20 minutes. They want the healthcare system fixed. Not revamped with your piece of legislation that’s going to kick millions of people off their health insurance and give billions of dollars in tax breaks to the wealthy.

They want what they have, but they just want it to be a little cheaper. They want prescription drugs to be a little cheaper. They want their premiums to be cheaper. They want their out-of-pocket expenses and their deductibles to go down. That’s all they want. That is all the American public is asking for. Instead, Donald Trump and the Republicans come up with this horrible piece of legislation that, again, big tax break to the already wealthy, going to kick 10 million off their health insurance. Nobody’s happy. Hospital’s lose money. Doctors lose money. Nurses lose money. Senior citizens lose coverage. Everybody loses, except for the wealthy. The other group that’s going to lose big time because of this is the Republican Party. That is why Donald Trump is having to come out right now and already give them their talking points for 2018. We’re going to blame this on the Democrats because we think that the public is so stupid that they’ll actually believe that.