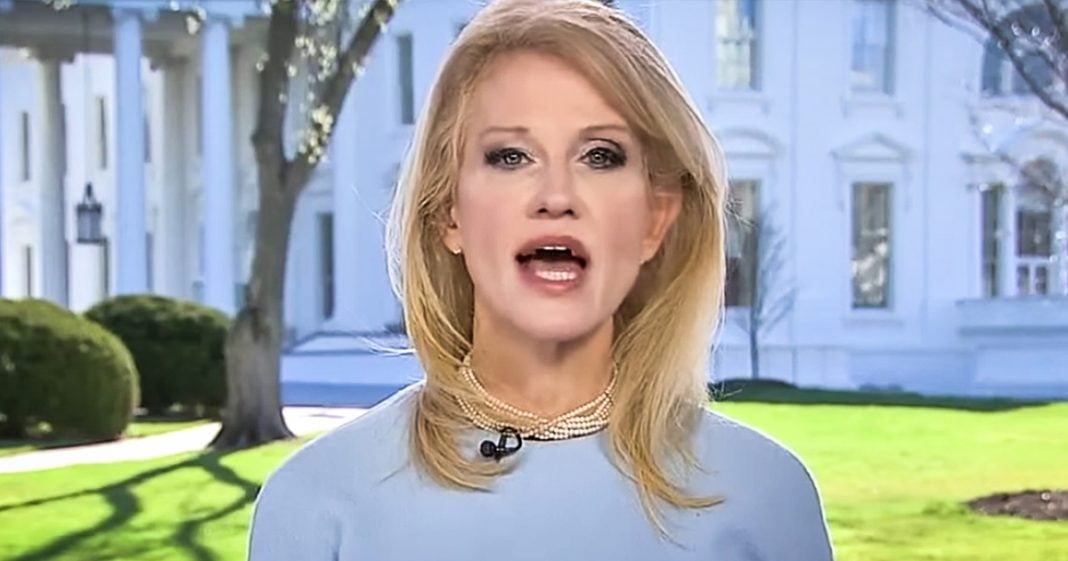 Kellyanne Conway is back from her White House-imposed exile from the media, and she told Fox News that people really need to stop calling the GOP’s healthcare replacement plan “Trumpcare.”  Might not be a bad idea considering how many things that have carried the Trump label have failed. Ring of Fire’s Farron Cousins discusses this.

Kellyanne Conway has apparently broken her White House imposed media exile, and she appeared on Fox News Wednesday morning of this week to talk about the American Healthcare Act which is the Obamacare replacement plan that the Republicans have put forth. During the interview on Fox News, Bill Hemmers, the Fox News host asked her if we should call this Trumpcare. To which Kellyanne Conway said, “No. We do not need to put Donald Trump’s name on this. He didn’t call us aside and say, ‘I want my name on this.'” And then she said, “It’s not about branding this with someone’s name. This is serious business.” So Kellyanne Conway does not want us to call this thing Trumpcare, because healthcare for American citizens is a very serious issue that shouldn’t be branded to someone’s name. You know, just like President Obama did not tell anyone to call this thing Obamacare, yet Republicans did that to give it a negative connotation and to hang it around Barack Obama’s head in case it failed. It didn’t, but that didn’t stop them from using the term. Now even Democrats have adopted that term as well.

For her to say this isn’t about branding someone’s name, you’re literally talking about a man who has his name on countless building across the globe, who loves his name, who has named everything that he’s ever done after him, including one of his children. No, no, no. Donald Trump loves to brand things in his own name, Kellyanne. I don’t know if you’ve noticed that, but that’s what he does. His entire life is built around calling things Trump blank. Because of that, I also understand why you don’t want to call this thing Trumpcare, because it’s likely to fail, a lot like Trump Casinos, and Trump Airlines, and Trump University, and Trump Steaks, and Trump Vodka, and damn near everything else that Donald Trump has ever put his name on. The man is a failure and everything other than real estate. He has failed across the board. He’s bankrupted casinos, airlines, Trump Water.

This is a man that cannot market himself out of a paper bag, so no wonder people like Kellyanne Conway are telling the folks at Fox New, “Hey, let’s not call this Trumpcare.” Because you know what? They understand that it is going to be a failure. They understand that the Democrats are going to hang that Trumpcare label around their necks, much like Republicans did to Barack Obama, during the next midterm election. This healthcare plan is going to cost the GOP dearly in 2018, and Kellyanne Conway, and the White House, and everyone else does not want those midterm losses associated with Donald Trump, because that is then going to hurt his reelection bid, assuming he stays in office until 2020.

Now, as for the, “Let’s take this seriously,” I thought that’s what the Democrats had already done by trying to get healthcare for millions of Americans. They did get healthcare for millions of Americans, 20 million to be exact. Your party, Kellyanne, is attempting to take that away because they want to give tax cuts to the wealthy, because they want to take care of their wealthy donors. Everybody was taking this issue seriously until your clown of a president, your boss, came into office and decided to put the throttle on, on repealing and replacing the Affordable Care Act.

That’s not taking it serious. That’s telling the American public that we don’t care. We don’t care that you’re going to lose your health insurance. We want to take care of the wealthy. If anybody’s not taking it seriously, Kellyanne, it’s you. My advice for the White House at this point, go ahead put Kellyanne Conway back into timeout and keep her out of the media for another couple weeks, because she is doing you absolutely no favors.