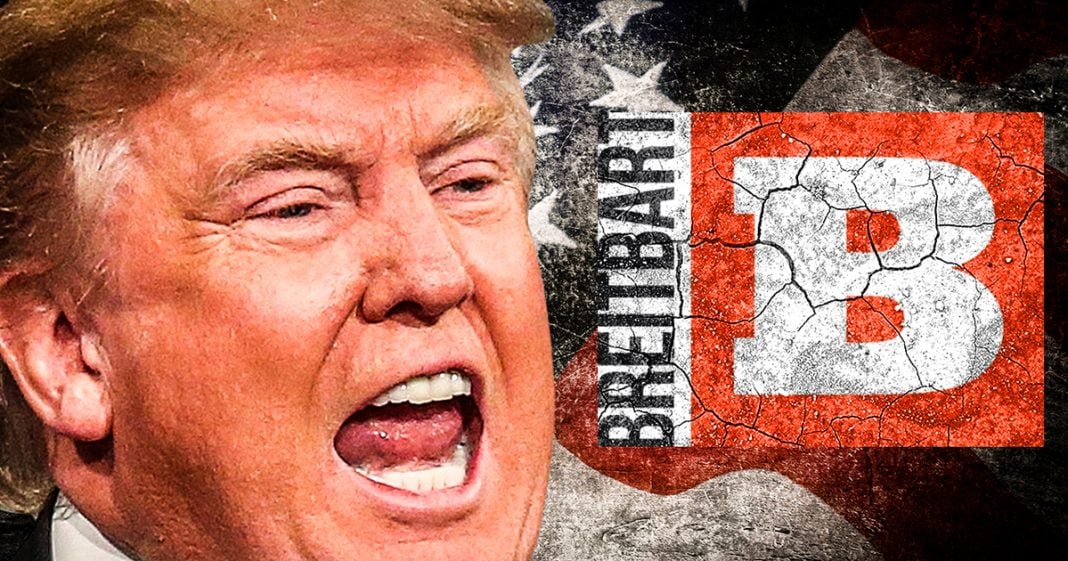 A new study shows that the right wing outlet Breitbart was at the center of driving the corporate media’s agenda during the 2016 Presidential election and primaries. News stories that originated on Breitbart bounced through conservative media outlets and then onto progressive media outlets that were forced to refute or debunk the issues driven by the right wing media.  This is a dangerous trend that appears to be continuing with President Trump’s mainstreaming of the fringe news site. Ring of Fire’s Farron Cousins discusses this.

Is Breitbart.com actually the most influential new outlet in the United States? According to a new study posted online at the Columbia Journalism Review, it actually looks like Breitbart might be the most powerful news organization in the entire country. According to their analysis of the issues that Breitbart covered during the 2016 presidential election and the primaries, it turns out that Breitbart was the driving force not only behind all of the right-wing media narratives during the campaign, but that narrative also bled over into the corporate media and sometimes even into liberal media outlets. Breitbart was always traced back to be the originator of those stories.

For example, when Donald Trump launched his campaign talking about these horrible immigrants that was ripped directly from the headlines on Breitbart, once Donald Trump said that, other right-wing blogs began to pick it up and then it made its way over into corporate news where everybody was suddenly talking about the issue that Breitbart had originally posted about. This happened all throughout the campaign. It happened on a number of issues according to this new study.

In terms of Hillary Clinton, Breitbart was one of the main pushers of the email scandal, Benghazi, all of that, which obviously bled into all media outlets, corporate media outlets, liberal media outlets, Democratic outlets. They were forced to go on the defense because everybody picked up the Breitbart narrative. If you get a chance, I highly suggest you go look at this study on Columbia Journalism Review, and just look at the web that they have created of the stories that originated on Breitbart that were picked up, either repeated by Donald Trump or bounced through the conservative media outlets, made their way to Fox News, made their way to MSNBC, and CBS, and ABC, and CNN, and all of the rest.

This is why this particular story is so disgusting and concerning for America. Right now, we have a sitting president who actually took a guy from Breitbart and made him his chief advisor, Steve Bannon. This is a guy that is helping to draft executive orders, and he comes from the fake news, disgusting, lying outlet of Breitbart. President Trump goes on Twitter and repeats nonsense that he reads on Breitbart. Once he repeats the nonsense from Breitbart, every major outlet in this country begins to talk about it. Whether to debunk it or to give it more credence, it doesn’t matter which side they take on it, because they’re still talking about the issues that Breitbart is putting forward.

Breitbart really has become the most influential news organization in the United States today, and it’s all because of Donald Trump. If he were not out there repeating Breitbart’s lies, nobody would care about this outlet. When Andrew Breitbart, himself, died a few years back, other than conservative media, nobody noticed and nobody cared. It wasn’t a thing. Suddenly, when Trump comes along and elevates this organization to the status of somehow being reputable, giving them a seat in the front row at White House press briefings, making CNN sit in the back or telling them they’re not even allowed to come in, we’ve delegitimized actual news organizations, and we’re propping up an organization that has no concern for telling the truth, no concern for the wellbeing of the readers or the intelligence of the readers. They just want to pump out lies to make immigrants look bad, to make Black people look bad, to make Muslims look bad, women look bad, and to make Donald Trump look great.

He’s going to continue to prop them up. The longer he does that, the more the corporate media is going to repeat the lies that are heard on Breitbart. They have infected every facet of the media today. The overall effect is that we have a dumbed down corporate media, and even more dumbed down American public as a result of the Breitbart effect.