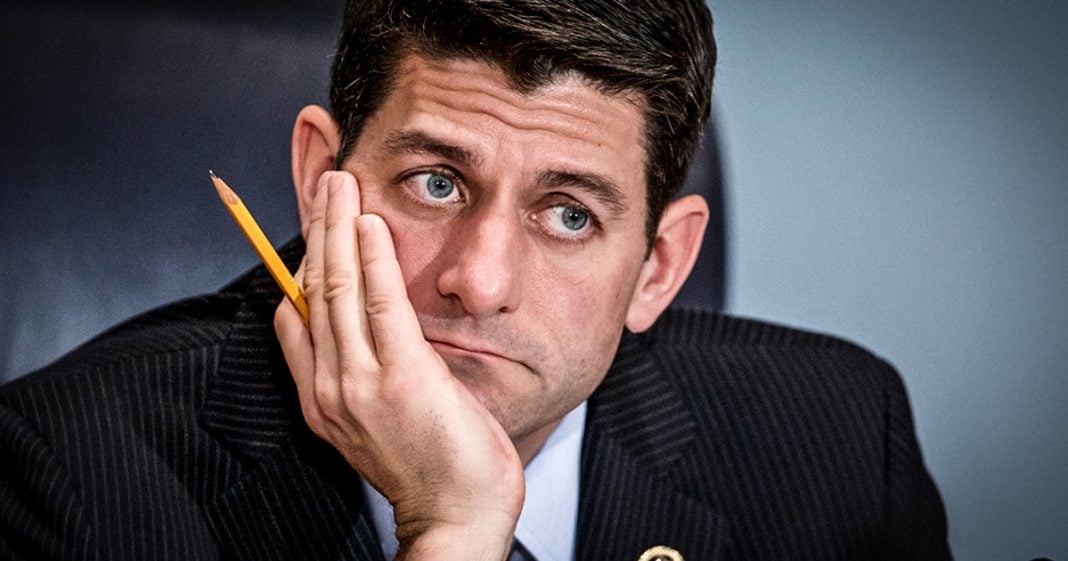 During a Q&A about his Party’s new healthcare plan, Paul Ryan was asked about the millions of people that could lose their healthcare coverage under his plan. He replied by telling the audience that the most important thing was to bring costs down – Which is Republican code talk for shifting the cost burden onto low and middle income taxpayers instead of taxing the top 1% as the current system does. Ring of Fire’s Farron Cousins discusses this.

At a press conference yesterday when Paul Ryan was trying to go out there and defend or even slightly explain the new Republican healthcare proposal, he was asked by a reporter what he thinks of the S&P’s analysis that up to 10 million people could be kicked off of health insurance in the United States as a result of the Republicans’ plans. Paul Ryan said two things in response. The first was that those numbers are completely bogus. People aren’t going to lose their health insurance. They are going to have access to more affordable healthcare, a statement that is completely untrue. But the second thing he said is the most important thing. He said that what matters most is that we’re lowering costs for the program. So in the mind of Paul Ryan, in the eyes of Republicans, it’s more important for the government to spend less money than it is to take care of people who cannot afford health insurance, who can’t afford to go to the doctor or to get their prescription medication.

More important for Republicans is making sure that a government program spends less money. But in reality that’s still just Republican code talk, because it’s not about the program spending less money. It’s about shifting the cost of Obamacare from the top 1% to the bottom 99%. This Republican healthcare plan is going to give away $600 billion, according to the Washington Post, to the wealthy elite in the United States. People who make more than a quarter of a million dollars a year are going to get a tax break under this new Republican plan. Meanwhile, the average family plan in the United States for health insurance under the Republican proposal is going to go up by over $1,400 a year. So the bottom 99% is going to spend more than $1,400 a year on their current plans. They’re going to have to spend another $1,400 on top of what they already pay, and the wealthy in total get a $600 billion tax break.

That’s what Paul Ryan means when he says we’re going to lower the costs. They’re not lowering anything. They’re shifting the costs from people who can afford it to people who have been paying for it under Obamacare that’s provided subsidies for low-income people to finally get health insurance. Instead, that tax burden, that cost burden is going to shift back to the bottom 99, and that’s been the Republican plan all along. That is the only reason that they hated Obamacare was that their wealthy Republican donors had to pay a few dollars more in taxes every year to make sure that 20 million American citizens finally got health insurance. So now Paul Ryan and his Republican brothers and sisters up in Washington think it’s perfectly fine to kick 10 million American citizens off their healthcare coverage if it means giving the wealthy elite a few more dollars every year.

That is all they care about. This isn’t about cutting costs. This isn’t about saving the government money. It’s about shifting the cost to people who already can’t afford health insurance. Now you’re going to have to pay even more. Now you’re not going to get any subsidies. You’re not going to get any tax breaks. You’re on your own in Republican America because they want to make sure that they give every tax break possible, every dollar they find on the ground. They want to make sure that money goes to the people who don’t need it. And the people who do need a government handout, a helping hand, something to help them with their horrible situation in life that Republicans also helped create, go to hell. That’s what Republicans say. They don’t want to help you. They don’t want to lift you up. They don’t want to make your life slightly better.

We want to make lives better for the people who already have phenomenal lives, the people who have the kind of lives that the rest of this country dreams about having one day. That’s the people Republicans care about; and that is the entire point, the entire focus, and the only group that is going to benefit from this disaster of a Republican healthcare plan.