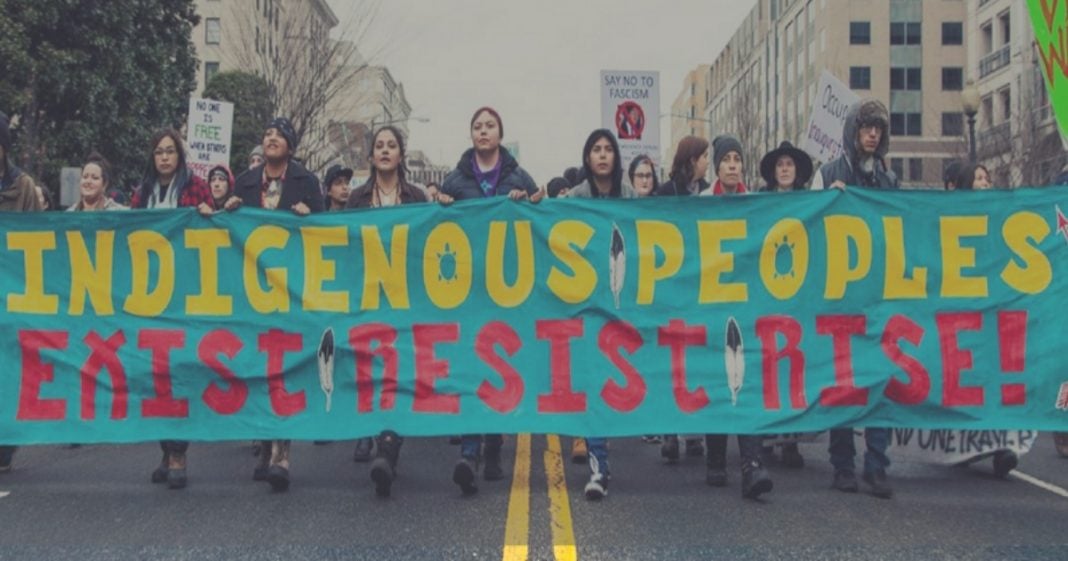 Tuesday, Indigenous tribes began setting up camps on the National Mall. Tribal leaders and activists are gathering in Washington DC for a four-day rally as they call for President Trump and the Federal government to respect tribal rights. The rally will culminate with a massive march from the Army Corps of Engineers’ headquarters to the White House on Friday.

What a beautiful site. The @WhiteHouse has a reminder. The tipi camp has a view of resistance. #NativeNationsRise #MniWiconi #WaterIsLife pic.twitter.com/9Rg5x9ahp2

Organizers of the demonstration are demanding a meeting with the President to ensure the administration hears the concerns of Indigenous people. The Indigenous Environmental Network says that, “President Trump must meet with tribal leaders to hear why it’s critical that the US government respect tribal rights. This administration must work with tribal nations.” So far the White House has not publicized any plans to meet with the activists.

In the wake of the Dakota Access Pipeline (DAPL) protests, tribal groups feel that the government has pushed aside their rights in favor of corporate interests. The organizers say simply discussing matters with tribes is not enough:

“Consultation is not enough– tribal nations must require consent.”

The demonstration comes as the existing legal challenges to the DAPL project have been exhausted. On Tuesday, US District Judge James A. Boasberg denied a legal challenge to temporarily block DAPL’s completion. The Standing Rock and Cheyenne River Sioux tribes had filed a motion saying that the construction of the pipeline that would, “desecrate the waters upon which Cheyenne River Sioux tribal members rely for their most important religious practices and therefore substantially burden the free exercise of their religion.” The pipeline will run under nearby Lake Oahe, which is upstream from the Standing Rock Sioux Tribe reservation.

In his ruling, Judge Boasberg cited legal precedent set in the Supreme Court by saying that the government’s granting of the easement for the pipeline did not violate religious freedom laws. The ruling clears the way for oil to begin moving through the pipeline as early as next week.

While the protests did not stop the DAPL from being completed, Tribal leaders saw that the protests brought unity among Indigenous tribes and grew to be a worldwide effort. “The Standing Rock movement is bigger than one tribe. It has evolved into a powerful global phenomenon highlighting the necessity to respect Indigenous Nations and their right to protect their homelands, environment and future generations,” organizers said.

Standing Rock Sioux chairman Dave Archambault II is not discouraged by the ruling. In a statement, Archambault said,

“[t]hey want us to believe the fight is over—but we can still win this. We can unite in peaceful, prayerful resistance against this illegal pipeline. Now, we are calling on all our Native relatives and allies to rise with us. We must march against injustice—Native nations cannot continue to be pushed aside to benefit corporate interests and government whim.”

More than 2,000 Indigenous activists and supporters are expected to join the demonstration by Friday.