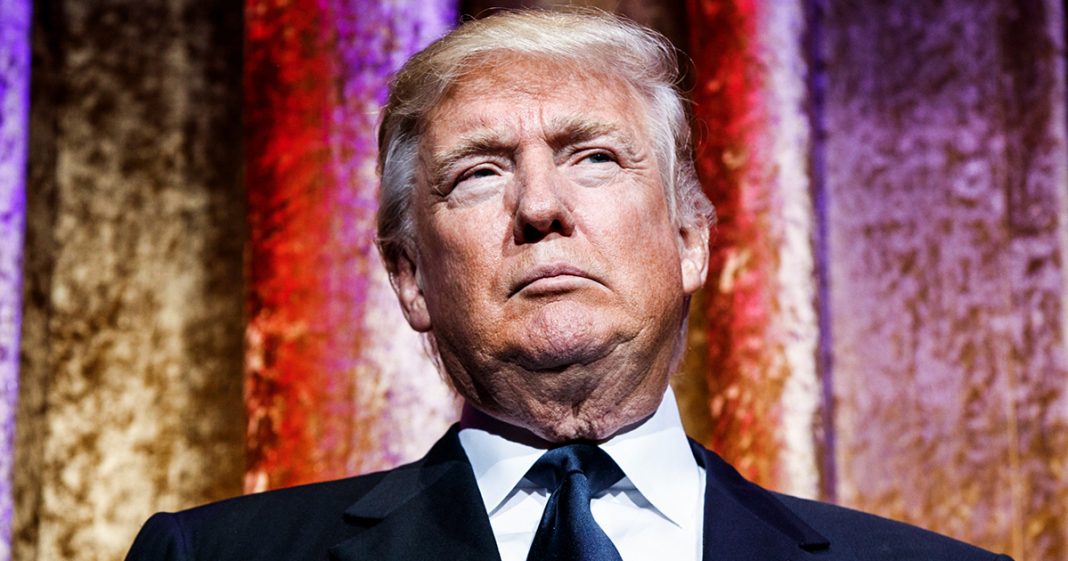 President Trump can’t stop repeating the false claims that he hears from Fox News, and this is very troubling considering that this man has access to our nation’s nuclear codes.  It’s time to start worrying about the Fox News president and what he’s capable of doing as a result of the fake news that he’s ingesting. Ring of Fire’s Farron Cousins discusses this.

President Trump tweeted out Tuesday morning that Barack Obama had released 122 prisoners from Guantanamo Bay and that those prisoners made their way back onto the battlefields overseas and the Middle East and began killing American soldiers. Now before we get into why it’s important that he said that, let’s dissect this for a minute because of those 122, George W. Bush, the Republican, actually released 113 of those, and so far, we really don’t know of that many, certainly not all of them who have “returned to the battlefield to begin killing American citizens.” Here is why Donald Trump’s tweet is so important. It’s from where he got that information. He got that information, those numbers, the idea of that tweet from Fox & Friends on Tuesday morning. We have a sitting U.S. President who is literally getting his foreign policy and current event news from Fox News.

If you want to talk about fake news, Fox News is sitting there in the throne as the king of fake news, have been for two decades now. For 20 years, they have been the least reliable cable news source in the United States. Study after study shows that Fox News viewers are the least informed out of all cable news viewers, and it’s dangerous when it’s the public. It’s deadly when it’s the President because we’ve already seen what happens when he made his last night in Sweden comments, and now here he is repeating these false claims that Barack Obama released a bunch of murderers to the Middle East and now they’re killing U.S. citizens. That’s not true.

Obama didn’t do that, and the majority of them were not over there killing U.S. citizens, you idiot, but the folks at Fox & Friends, the folks at Fox News, they don’t care. Their base, the Republican base is built on fear. That’s all they know how to do is be afraid of shit. That’s why they say these things. That’s why they spread these lies because it keeps their viewers entertained. It keeps their eyeballs glued to the television. What do I need to be afraid of today? What’s going to try and come kill me because I’m living in a perpetual state of fear? Again, dangerous when it’s the public. Deadly for the American people when it’s the sitting President of the United States doing this, and that’s what we have today.

Donald Trump is getting his information about the way the world operates from Fox News, and if that doesn’t scare you, then you’re not paying enough attention to what’s happening in the United States today. Fox News has always been dangerous, but now that they have a President who blindly believes every single thing they say, that’s putting us all in danger. If Donald Trump honestly believed that these people were released from Guantanamo Bay by Barack Obama to go back overseas and start killing American citizens, then what’s to stop him from launching a massive airstrike over there, huh? This is faulty, fake information that could result in a disastrous military action. We already saw what happened when CNN began propping up the Bush administration’s claims about WMDs in Iraq. They pushed that war. Fox News is pushing for more conflict in the Middle East, and unfortunately, the President, who doesn’t have a mind of his own, is willing to believe anything that those idiots on that Fox & Friends couch spit out every morning, and he’s getting on Twitter and telling all of his idiotic followers about this. He is selling the Fox News lies. Fox News at this point is more of a President of the United States than Donald Trump is, and I know that Donald Trump wouldn’t appreciate anybody saying that so maybe that’s where we take it from here.

If we want to get the President to stop paying attention to Fox News, let’s start saying that they’re the President. It worked with Steve Bannon. Why can’t it work with Fox?