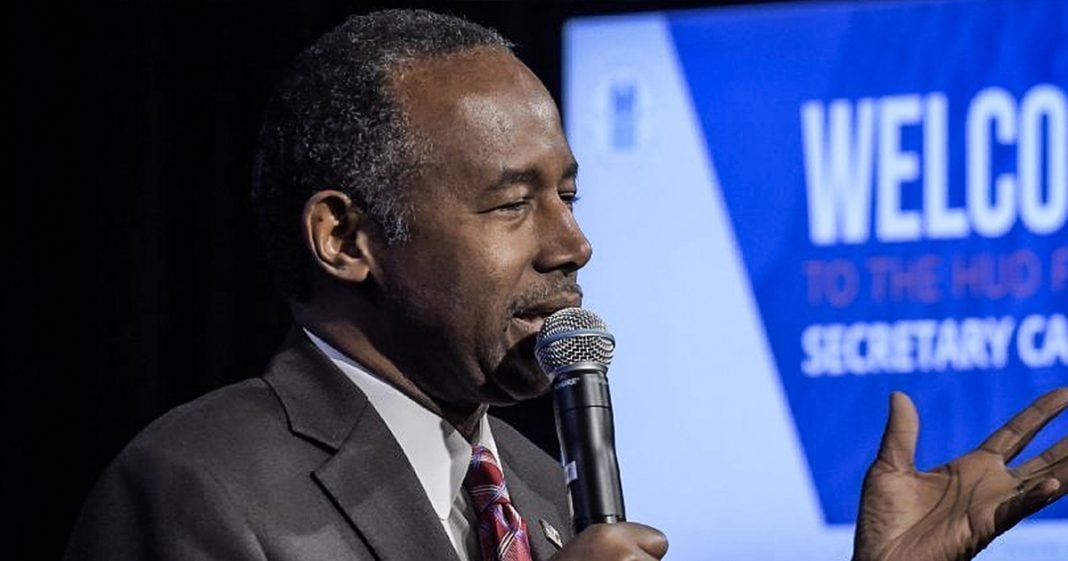 Dr. Ben Carson stated during a speech this week that many “immigrants” came to the US in the bottom of slave ships and worked longer hours for less pay, but they did it because they had a dream of a better life for themselves and their children.  No, Ben, those were slaves.  They were brought here against their will to work for literally nothing. Ring of Fire’s Farron Cousins discusses this.

Cousins: Dr. Ben Carson may have a PhD. He may have gone to medical school, but what this man really needs right now is a history lesson. Take a look at what he said during a speech earlier this week.

Carson: A man of dreams and opportunity. There were other immigrants who came here in the bottom of slave ships, worked even longer, even harder for less, but they too had a dream that one day their sons, daughter, grandsons, granddaughters, great grandson, great granddaughters might pursue prosperity and happiness in this land.

Cousins: That’s right, folks. Those people that the United States went overseas and rounded up, stole from their homes, stole from their homelands, those were just immigrants. They wanted to come over here stuffed in the bottom of those ships and work for lower wages than the white man because they all had a dream. They all thought they were going to come over here and make a better life for themselves and their kids. I am not a history buff. I don’t know everything about US history, but I do know enough that that’s not even close to what happened, Dr. Carson. At this point, it’s almost insulting to other doctors to even refer to you as Dr., so I’m not going to call you that anymore. You’re just Ben because you are so ignorant that you do not deserve the title of Dr. at this point.

Those people that the United States ripped from their homelands were not immigrants. They were slaves. They were brought over here to work under hellish conditions for absolutely no pay what so ever and that’s what they were. They weren’t immigrants. They didn’t want to come here. They were kidnapped. They were stolen. Families were torn apart. They had no idea what happened. That’s what happened in United States history, Ben Carson. Your disgusting revisionist version of this isn’t a front to every single American citizen, not just African Americans. You’re re-writing one of the ugliest parts of American history and ugly or not, it is part of our history. If we pretend that it didn’t happen, that’s even more insulting, but that is exactly what you are doing, Ben.

You know, at this point I have to wonder if any of the stories about you, that movie with Cuba Gooding Jr., did any of that shit actually happen? You are by far one of the dumbest people in American politics today. I’m sorry, I find that hard to believe that you could have ever been successful at cutting open peoples’ heads and tinkering with their brains when you don’t even know that slaves were slaves and not immigrants. That’s very concerning to me, Ben, because this is basic US history. My children are in elementary school and they know more about US slavery than you do. That shouldn’t be the case.

I’m at a loss at this point for the rampant stupidity in revisionist history coming out of not just the Republican Party, but mainly the Trump Administration itself. These people are so disconnected from reality that they’re actually causing harm to the American public and to American discourse at this point. You can’t have an intelligent conversation with these people. You can’t have a rational conversation with these people. All you can do is sit back and watch as the flurry of stupid flies from their mouths and hope that nobody in that crowd, nobody listening to this garbage actually believes it. Unfortunately, they’re Republicans so they probably do.