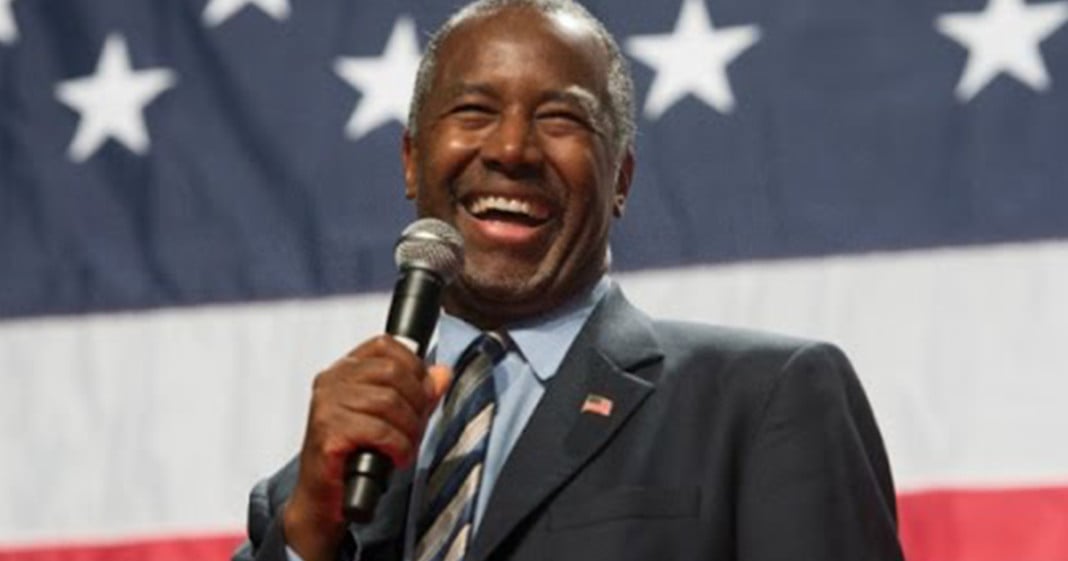 Newly-appointed head of the Housing and Urban Development agency Ben Carson gave his first address to his department on Monday afternoon, and in comically predictable fashion, couldn’t get to the conclusion of his speech without creating a perfectly offensive soundbite.

Carson, the only black man in Trump’s cabinet, appeared to rewrite history when he referred to this nation’s history of immigrants and included Africans brought to this continent via slavery as another type of immigrant.

“There were other immigrants who came here in the bottom of slave ships, worked even longer, even harder for less.”

One might be willing to forgive Carson for his soundbite if it weren’t for the context of Carson’s past behavior and comments. Not only has Carson been called an “Uncle Tom,” by many prominent black Americans for rolling over for Trump, but he has in the past said that the implementation of Obamacare was the “worst thing that has happened in this nation since slavery.”

Referring to victims of slavery as immigrants indicates a certain agency and willingness to move, rather than the reality of their violent capture, near-death transport, and unspeakable atrocities faced once on U.S. soil. To reduce all of that to “immigrant,” is to erase the history of violence and bloodshed that build this nation.

But then again, Carson’s comment appears to fit snugly in a newly-established precedent from the Trump White House which appears to frequently re-write history to minimize the struggle of others.

The first of such occasions occurred on International Holocaust Remembrance day when the White House issued a statement honoring the day without ever mentioning the word “Jew.” Rather than explaining the vague statement as a misstep, the White House defended their word choice by arguing that many more than Jews were affected by the Holocaust.

Then, just last week, newly-appointed Education Secretary Betsy DeVos was in hot water after praising Historically Black Colleges for being the first proponents of “school choice.” Of course, DeVos, in her praise, failed to note that Black schools had no choice in their “school choice,” as black students were originally barred from attending white schools due to segregation.

Is Carson’s tone-deaf comment a deliberate contribution to this narrative of revisionist history? His comment is either the result of outright ignorance or nefarious intentions – either of which are completely unacceptable.