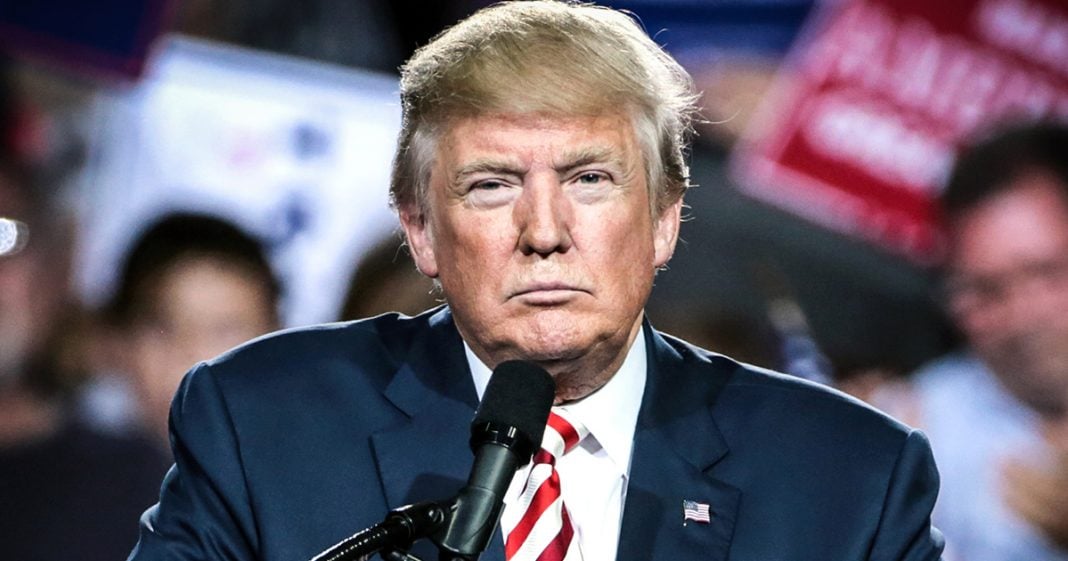 Donald Trump woke up early Saturday morning to launch into a Twitter tirade about former president Barack Obama wiretapping Trump Tower during the campaign.  There’s no evidence available at the moment to substantiate these claims, but Trump’s never been one to wait for information before making outlandish claims. Ring of Fire’s Farron Cousins discusses this.

Obviously the biggest story over the past weekend was the fact that Donald Trump decided to wake up on a Saturday morning, get one Twitter, and accuse the Obama administration, Barack Obama himself, of wiretapping Trump Tower during the 2016 presidential campaign. Now, many people were quick to point out the fact that the president of the United States does not have the authority to issue a wiretap and that is absolutely true. You have to go through the FISA courts. These types of things are initiated by intelligence agencies or law enforcement agencies and only when they believe a crime has been committed, or that there’s some conspiracy to commit a crime, or illegal contact with foreign nationals. The fact that Donald Trump blames Barack Obama for this is completely moot at this point. Obama could not do that, however, law enforcement agencies absolutely could.

More importantly, Donald Trump absolutely provided no information whatsoever to show that this actually happened. We do not know at the moment whether or not Trump Tower was wiretapped, or if anybody was listening in on Donald Trump or any of this staffers phone call. That really is the most important part of this story. If they were wiretapped, it would have to be because there was a crime suspected of being committed or in the process of being committed. These FISA courts that issue these wiretap rulings do not do so lightly. This is not something that you can just go before the FISA court, say, “I want to wiretap this guy just because I want to,” and they grant it. They don’t do that. Now, the big question becomes not what he was wiretapped for, but whether he was even wiretapped because if he was, that’s a pretty good indication that somebody within the law enforcement agencies had reason to believe that the Trump administration was committing illegal activities.

Until we get more information, we can’t really say one way or the other whether he was wiretapped, but the fact that he did this on Twitter on a Saturday morning shows just how unhinged this man is. If he actually had some issue with this, or if he had some proof, do you know who has the power to declassify information like this? Donald Trump, the president of the United States. If he suspected himself of being wiretapped, he could contact those agencies and say, “Send over the files. Declassify this information. Release it to the public right now,” and they would have to do it. You don’t go on Twitter and make these baseless accusations to drum up sympathy for yourself and your campaign without following through on the back end there.

If you are wiretapped and you want to make president Obama look like the bad guy, release those files. Declassify them. Send them out the public, but the fact is you probably weren’t. You just want to make Obama the enemy because, in the eyes of republicans, everything that’s happening right now in Washington DC is still Barack Obama’s fault. I remember a couple days after Barack Obama was sworn in as president in the year 2009, republicans on Fox News were bitching about the fact that liberals were still talking about the economic mess that George W. Bush had left. They said, “Nope. This is Obama’s economy now. Everything that happens is on him.” Well, that’s not true because George W. Bush’s final budget remained in effect until either September or October of that year. It was still the Bush economy, but that’s how fast republicans wanted to move on from George W. Bush. The day Obama was sworn in, every disaster that Bush created suddenly became Obama’s disaster. Now that he’s left office, every disaster that Trump creates somehow is still Obama’s fault.

These Jeff Sessions issue, the perjury, somehow Obama’s fault. They honestly believe that he set up Jeff Sessions to meet with these people only so that later on down the road, assuming Trump won the presidency, and assuming he nominated Jeff Sessions to be attorney general, and assuming Sessions would lie about it, that was Obama’s plan. How in the hell do you even pull off something like that when there’s so many assumptions to be made along the way? This isn’t Ocean’s Eleven. He’s not planning some massive heist that requires every single piece of the puzzle to fall perfectly into place at every given opportunity, but that’s what Donald Trump believes. That’s why he’s out there on Twitter blaming Barack Obama for every problem that he is currently having in his presidency. If information comes out that shows that Donald Trump was wiretapped, I can’t wait to find out the reason and find out what his campaign was actually doing to deserve to be wiretapped.