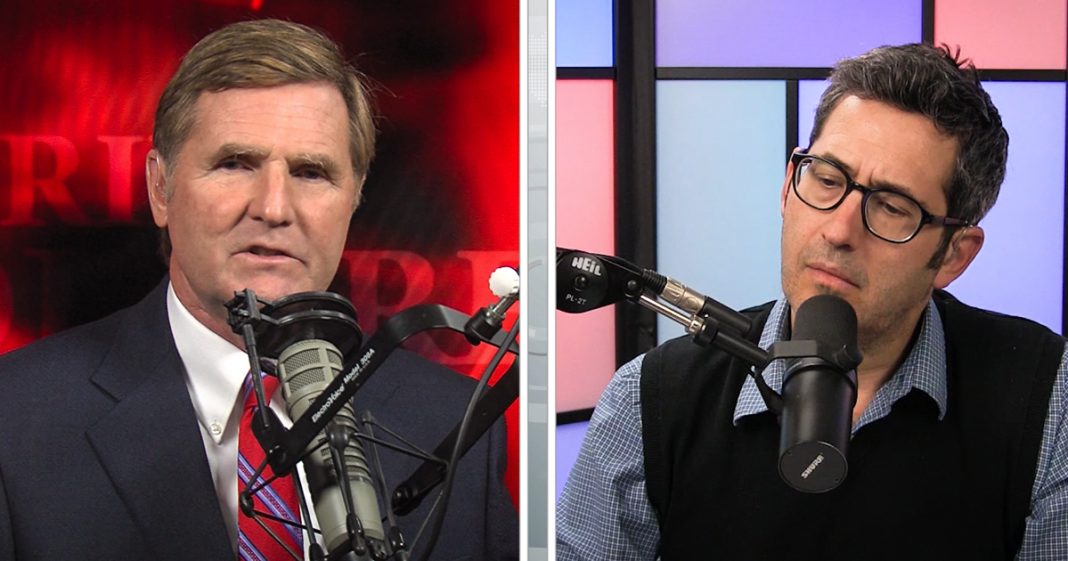 The idea of intelligence agencies clearly trying to undermine or manipulate elected leaders by leaking is very problematic. Ring of Fire’s Mike Papantonio & Sam Seder debate about the latest leaks coming out of the White House, and whether or not the leaks are helping or hurting democracy.

Sam: Pap, before the break we were talking about what has been really an ongoing story, it seems to me over the past six weeks, really since Donald Trump was inaugurated which is at times a cascading, at other times a drip, drip, drip of leaks about investigations that have taken place or that are ongoing regarding Donald Trump and either members of the Trump administration or people associated with the Trump campaign. There are two different perspectives on this, and I think they’re not necessarily mutually exclusive. One is that it is very problematic, the idea of intelligence agencies clearly trying to undermine or manipulate elected leaders by leaking.

Pap: Sam, not just elected leaders. They are undermining political policy. That’s my point. It’s not just about an elected leader. Now these Hillary holdovers that can’t get over the idea that she was a terrible candidate, and that they should have given Bernie Sanders a chance to run, these Hillary holdovers still look at this and say, oh my god, we don’t care what the intelligence industry does. We don’t care if they create a cold war with Russia. We’re going to let that nut job, McCain, create whatever he wants to create as far as this unsettling aura, this era of everybody being so unsettled about world peace because McCain is the guy who all of the arms industry goes to when they want something done. McCain’s fingerprints are all over this, Sam.

Sam: I just want to aggregate a couple of things. It is clear, it seems to me, that there is an ongoing investigation. We know from reporting at this point it’s leaked. Look, these leaks are just as illegal as any other leaks that we get from intelligence services, but there’s also this concept of whistle blowing. There’s certainly a perspective that’s out there that there’s an ongoing investigation, that there was concern by people in the FBI that the investigation would be quashed by a new Department of Justice head, Attorney General who obviously closely aligned with Donald Trump.

Pap: He will. He’s going to make this go away. I can promise you, he will, and that’s wrong.

Sam: It’s really problematic. On one level the real story, it seems to me, could be that we have whistle blowing. On one hand we have progressives who are championing the right for these intelligence agencies to basically whistle blow on an administration that might be trying to quash …

Pap: It’s against the law, Sam.

Sam: I understand that.

Pap: We have a constitution. We agree to …

Sam: I understand, but when Thomas Drake did this whistle blowing I was supportive of what he was doing even though it was against the law. When Edward Snowden whistle blowed, I was supportive of him and Chelsea Manning, supportive of her when they did this whistle blowing. It’s quite possible this is a very similar situation. Just aggregate for a moment that this is Russia. If this was about members of the Trump administration having deals, banking deals, having all sorts of complicated financial transactions with any other large entity or any other large country and were seemingly making policy because I don’t think either one of us think that Donald Trump ran because he had a new vision for the way that we organize geopolitics in the world. Look, I’m not making any determination whether or not we should have a more close alliance with Russia or not.

Pap: Sam, this is not even about Russia. It’s about the fact that we have a constitutional rule of law in this country. We have an executive branch. We’ve got a congressional branch, and we’ve got a judicial branch. Nowhere in the Constitution is there any mention about a spook industry entity that’s supposed to make policy in this country. As a matter of fact, this is what Frank Church was terrified by. This is why we had months’ long hearing because the spook industry was running the government. To me, to have these pablum types that listen to oh my god, the Russians hacked the DNC. Maybe they did. I’m sure they did, but did that interfere with political policy? It did not interfere with political policy. It didn’t change the election.

Sam: I don’t think the issue whether or not they hacked or didn’t hack is really the issue here. The issue is whether or not we have an administration that’s functioning in the best interest of the United States or trying to enrich them …

Pap: We don’t know. That’s why we have checks and balances for.

Sam: We don’t have any checks and balances.

Sam: We have whistle blowers. Do you believe in the concept though that it’s possible there could be a legitimate leaking and whistle blowing, if there’s an investigation that they’re afraid will be shut down unless there is a political response from let’s say intelligence committees or outside …

Pap: If you follow the money on this one, it’s going to go three places. It’s going to go to the arms industry that wants a cold war with Russia. You may think that’s a good thing, I think it’s a bad thing.

Sam: Don’t we already have that?

Pap: It’s going to go there. You’re going to follow the money to the media which by god, they love a war. They’re the same people that invented Iraq, they wanted war. Sam, hold on one second. Why do you think McDonnell Douglas advertises on ABC and NBC and CBS? Are you going to go out and buy a rocket?

Sam: Donald Trump called for $64 billion increase in military spending this week. If this is about arms manufacturers, they would want to keep Donald Trump in place.

Pap: It’s about a cold war, Sam. It’s about the idea that we don’t have spooks determining who we go to war with like they did, by the way, in Iraq. That was all generated by the spook industry who created yellow cake radioactive powder, who fed it all to the New York Times through Judith Miller.

Sam: My understanding of that is that was a function of elected leadership looking for what they wanted because that same intelligence was rejected by the Clinton administration.

Pap: Can I tell you something? We’re getting way off on the point, but the point is this. We don’t allow the spook industry to create political policy in this country. When you have Democrats who are so upset that Trump is the President, and they should be because most of them are responsible for that. They’re so upset that Trump is our new President that they’re willing to throw out the Constitution just to get even. That’s what’s happened with Hillary Clinton and those Podesta fools who lost the election. They want to generate this Russia issue. You got the war hawks who want to generate this Russia issue. You’ve got the media who would love nothing more than to pay back Boeing and McDonnell Douglas for their advertisements on the air. This is all about money. The money generation is taking place by and through the spook industry.

Sam: Let me just ask you a couple of questions. One, do you think that there is an ongoing investigation about connections between the Trump campaign and Trump campaign officials?

Pap: I think it’s going to be a half-witted investigation because Sessions … The answer is yes.

Sam: The investigation has already gone on. Do you think that it would be likely that Sessions may shut this down? We already know from this week that The White House has asked the FBI.

Pap: He’s not going to shut it down, Sam. He’s going to do worse than that. He is going to give you the appearance that something meaningful is happening, all the while …

Sam: In that instance, don’t you think that leaks in that narrow instance is something that we would want to encourage from whistle blowers?

Pap: No. I just believe in the Constitution, Sam. That’s why we have checks and balances. That’s why we’re not Turkey, or we’re not India. We’re not a third world country where we are driven by a spook industry fiat. That’s what’s happening in this country right now. It just is amazing to me that they average progressive doesn’t understand that, or if they do understand it, they’re not willing to accept it. That scares the ever living heck out of me. I got to tell you that.