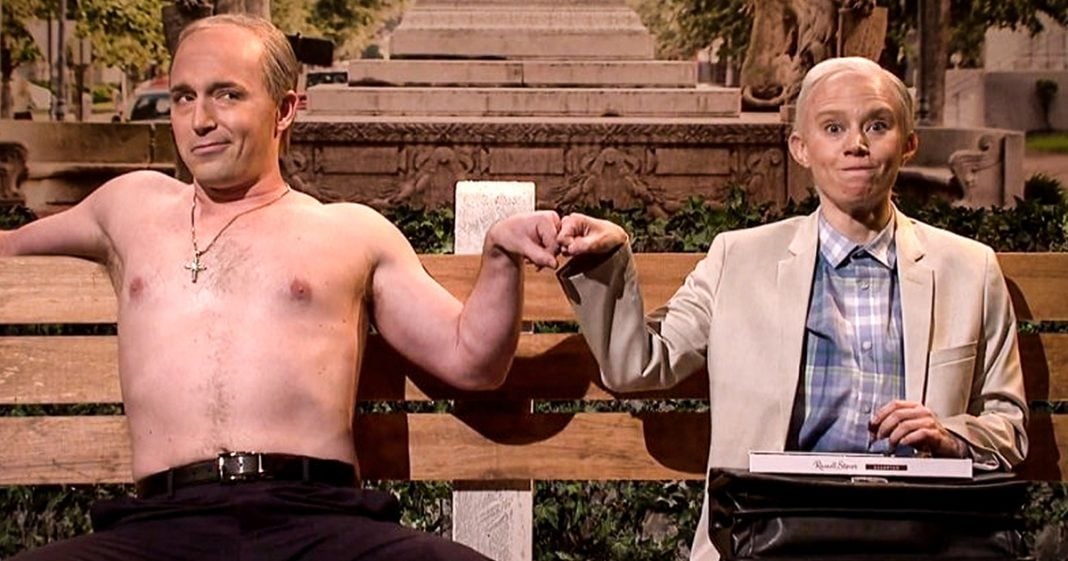 Saturday Night Live has once again nailed the problems with the Trump administration, this time in a skit that portrayed Jeff Sessions as a Forrest Gump-like character, who can’t help himself from being a bumbling, racist, compromised buffoon.  No word yet from the Trump administration on how they feel about the segment. Ring of Fire’s Farron Cousins discusses this.

This past weekend, Saturday Night Live once again decided to stick it to the Trump administration. We didn’t get to see Melissa McCarthy return as Sean Spicer, but we did see Kate McKinnon return as Jeff Sessions, this time portraying Jeff Sessions as a Forrest Gump-like character complete with all the racism and just flat out bumbling that you would expect from both Jeff Sessions and somebody like Forrest Gump. During the skit, Sessions sat on a park bench, explaining to passersby that no, he never talked to the Russians and then admitting, yeah, he talked to them twice. At one point, Vladimir Putin himself showed up, said, “This meeting never happened,” to which Jeff Sessions replied, “Doesn’t matter. I wouldn’t remember it anyway.”

All that aside, what this segment actually did was highlight some of the more disgusting traits of Jeff Sessions in a humorous way, something that many groups are not actually doing. It touched on the racism, when he opened his box of chocolates and said, “There’s a lot of brown ones,” when referring to both chocolates and life, which is something that the press has almost completely ignored in recent weeks since all of this information about the leaks and the meetings and all of that came about, but let’s not forget that Jeff Sessions essentially started his career as Alabama Attorney General on a campaign of racism. That’s what Saturday Night Live was attempting to remind us of.

In spite of all of the other horrible things happening with this man, deep down, the biggest issue that we have at the moment is the fact that he is a bleeding heart racist. As for the rest of it, Kate McKinnon’s portrayal of Jeff Sessions is really one of the best out there, probably actually the only one I’ve seen, but it does what Trump absolutely hates. It emasculates his cabinet. It emasculates his choices by having a woman playing a man. It really gets under his skin in a way that nobody else has been able to do. Unfortunately, the white house didn’t come out and say horrible things about Saturday Night Live the next day. They were too busy trying to fend off all of the horrible things that Trump said on Twitter on Saturday about being wiretapped by the Obama administration, but there’s no doubt that they’re aware of what happened and that they’re not happy about it.

Consider this. This past weekend, do you know what Jeff Sessions was doing? He was greeting people at the door at Mar-a-Lago. This man, the Attorney General of the United States, was essentially reduced to a doorman because he got in so much trouble this past week, and that’s what Trump is doing with these people. He is punishing them, humiliating them when they screw up. Kate McKinnon as Jeff Sessions, as Forrest Gump, completely nailed the humiliation that Jeff Sessions is currently suffering. I have to be honest. Even though he’s being humiliated, this guy is one of the few that absolutely deserves it.