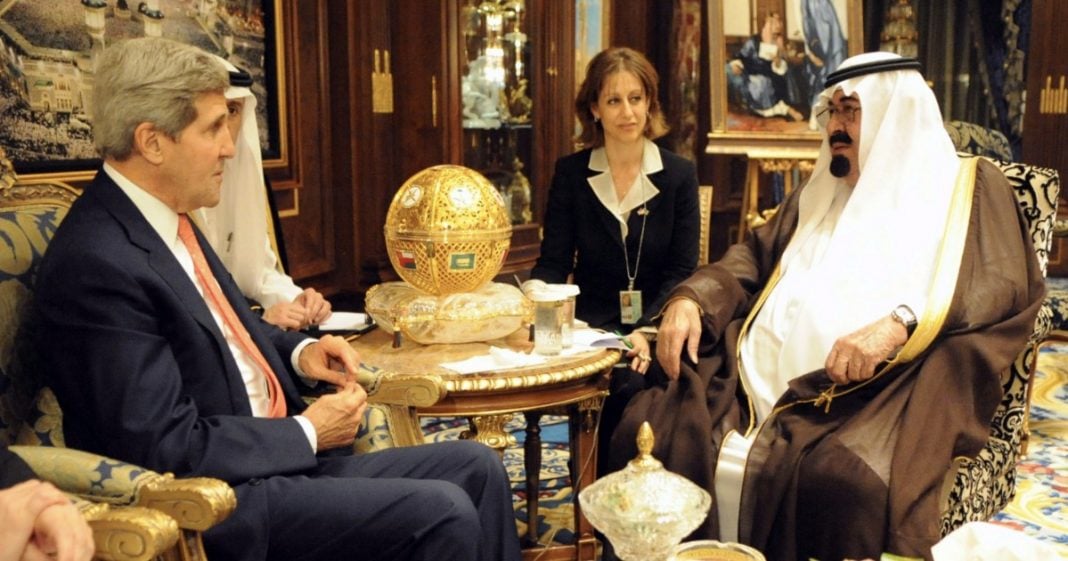 It seems the Saudi Arabian government has a powerful new ally when it comes to lobbying in Washington DC: American military veterans. The only problem is that the veterans aren’t aware that they are involved.

In September, Congress passed the Justice Against Sponsors of Terrorism Act (JASTA), which opens the door for 9/11 families to sue the Saudi Arabian government for their role in the terrorist attacks.

The bill faced plenty of criticism, with President Obama vetoing the bill only to see the Senate vote 97-1 to override the President’s authority and pass the bill anyway. In his veto, Obama said that the bill would “create complications in our relationships with even our closest partners.” Though many signs pointed to Saudi Arabia playing a significant role in funding the attacks, the President was worried that we may upset one of our key petroleum trade partners.

Now it seems the Saudi government is duping American military vets into lobbying against the bill. According to a New York Post article, vets are being offered all-expenses paid trips to Washington to ask Congress to gut the legislation. The PR firm Qorvis MSLGROUP is paying veterans to stay in the Trump International Hotel in support of an amendment to the bill that would limit Saudi Arabia’s liability. Qorvis MSLGROUP is operated by the Saudi Arabian government.

Posing as veteran advocates, the PR firm reaches out to military members telling them that the bill will open individual military personnel up to retaliatory lawsuits and harassment if they traveled overseas. But legal experts say that JASTA only deals with foreign states, not individuals.

In exchange for staying in the lap of luxury, with dinners and drinks included, the veterans were asked to pressure the House Armed Services Committee into fixing the bill. An amendment to do just that has been proposed by Republican Senators John McCain and Lindsey Graham, though President Trump has expressed that he would not sign such an amendment.

Jason E. Johns, the trip’s organizer, claims to head up “No Man Left Behind Veterans Advocacy Group,” however the Post reports that he is paid $100,000 as a registered Saudi agent, working for Qorvis MSLGROUP. According to those that have been on the trip, Johns categorically denies that the Saudis are behind the lobbying effort. The Post article quotes veteran Sargent Timothy Cord, who served in Iraq as saying,

“[Johns] stood up the first night to announce that ‘there are rumors going around about Saudi involvement, and they absolutely aren’t [involved].’ ”

However, a spokesperson for Qorvis continues to say that they have clearly disclosed the Saudi government’s role in planning the lobbying trips. Managing Director Michael Petruzzello says that, “everything is fully above board and everyone is fully informed of the issues.” And yet one would have to look at the fine print of the second page of a briefing paper for any expressed connection. “This is distributed by Qorvis MSLGROUP on behalf of the Royal Embassy of Saudi Arabia,” reads the document.

Understandably, veterans like Cord are upset that the scam exists and are working to inform others:

“it really pisses me off that vets are being lied to by other vets that are in the Saudis’ pocketbook.”

This abhorrent exploitation of our veterans is just another sickening chapter in the ongoing refusal to hold Saudi Arabia accountable for their role in the attacks. Most of the attackers on 9/11 were from Saudi Arabia and we’ve seen that the Saudi government funneled money to Al Qaeda prior to the attacks.

But those in our government like former President Obama and Senators McCain and Graham continue to be the lapdogs of the Saudi kingdom. Even President Trump’s controversial travel ban didn’t include Saudi Arabia. A country that has an awful human rights record against women, the LGBT community, and even those who merely disagree with their government can now add American veterans to the list of those it has abused.