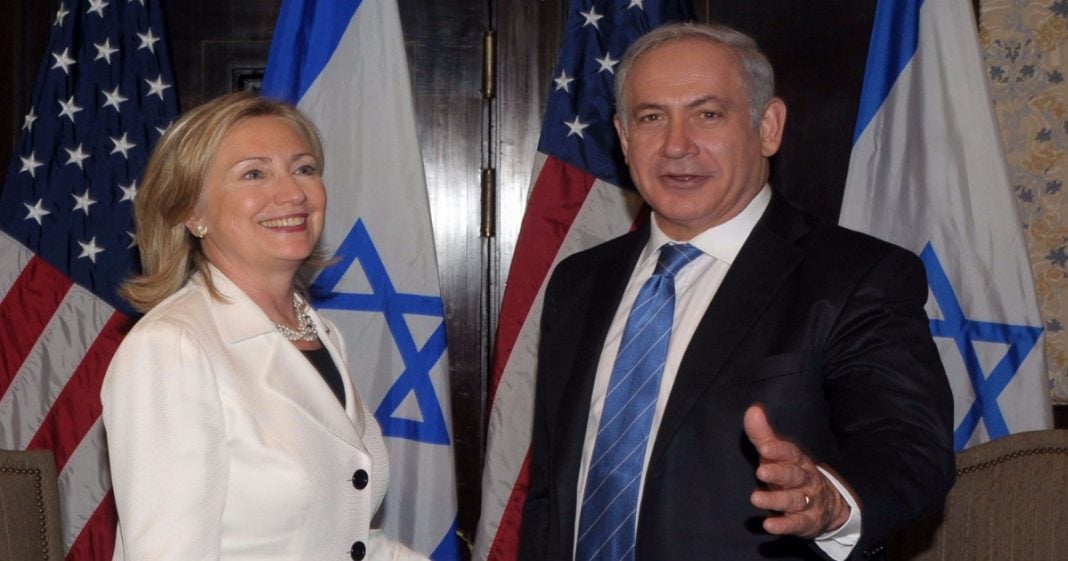 An ongoing investigation of the State Department shows that the United States under President Obama funded efforts to interfere with Israel’s 2015 election. Those funds may have even ended up back in the hands of a Hillary Clinton campaign PAC.

In 2013, the David Brock-backed OneVoice, received $349,276 to build a campaign in Israel promoting the State Department’s official stance that Israel and Palestine should exist as two independent states. To carry out the campaign, OneVoice enlisted the help of a newly-formed social media consulting firm, 270 Strategies. That campaign proved to be hugely successful, with massive amounts of social media engagement reported back to the State Department. OneVoice, in turn, gained tons of data on Israeli voters and social media trends.

However, in July of last year, a Senate investigation showed that the grant funds were ultimately used to actively campaign against Israel’s Prime Minister, Benjamin Netanyahu. OneVoice collected data and trained activists using the government funds, but waited until the State Department’s oversight expired to activate their army.

On December 2, 2014, just 2 days after the State Department’s contract with OneVoice came to an end, a group named Victory 15 (V15) was formed. V15 would soon enlist the help of Peter Daou (who has worked as an advisor to OneVoice) and Obama campaign veteran Jeremy Bird. The group was created with the sole intent of defeating Netanyahu in the recently announced 2015 election. Two weeks later, OneVoice announced that they had been working for months on plans to defeat Netanyahu and would be hiring V15 to carry out their campaign using the grant funds. V15 also contracted 270 Strategies to carry their message to social media.

“The record is clear, however, that OneVoice did inform at least two State Department officials of its political plans, and it did so during the grant period. The Department took no action in response, although it is unclear whether the officials in receipt of the plans reviewed them.”

Because OneVoice acted outside of the contract period and the State Department failed to keep tabs on their grant funds, no charges were filed.

But the story doesn’t end with the investigation. In the Senate report, it is detailed that Michael Ratney, the U.S. Consul General in Jerusalem, deleted emails related to OneVoice’s plans. The State Department did produce proof that OneVoice attempted to relay their plans against Netanyahu, clearing the organization of blame. But they claim that they could not find Mr. Ratney’s response which would have indicated wrongdoing on the part of State Department officials. According to the report,

“Mr. Ratney later elaborated, ‘[A]t times I deleted emails with attachments I didn’t need in order to maintain my inbox under the storage limit.’ There was an option to archive emails to stay below storage limits, but Mr. Ratney stated that he ‘did not know [he] was required to archive routine emails.’”

That statement – that a State Department official deleted critical emails regarding the misuse of government funds – sparked lawmakers to call for a new investigation last September. Meanwhile, the conservative-leaning watchdog, American Center for Law & Justice filed a lawsuit requesting that the State Department release all records tied to OneVoice under the Freedom of Information Act. So far, those proceedings are still ongoing.

As new investigations were launched, another curious move drew more scrutiny to the OneVoice deal. Late last year during the height of Hillary Clinton’s campaign for the White House, DNC allies pointed to a powerful new tool in their social media efforts, 270 Strategies, the same group contracted by both OneVoice and V15 using the State Department grant.

“We launched 270 after years of leading key pieces of the Obama organization — including grassroots organizing, digital, communications, and data analytics. We were honored to serve President Obama and wanted to keep doing big things to change the world.”

Indeed, the consulting firm was formed by Jeremy Bird & Mitch Stewart, two key Obama campaign staffers. Bird is the same Jeremy Bird that helped create V15. Bird and Stewart launched the firm in 2013, around the same time OneVoice received their grant from the State Department. While the 270 touts their various missions like legalizing marijuana or assisting Planned Parenthood, they were formed primarily to get Hillary Clinton elected President. The name of the group, 270 Strategies, refers to the 270 Electoral College votes that Hillary Clinton would need to win the 2016 election. They would go on to be the digital team behind the Ready for Hillary PAC, recruiting over 56,000 volunteers.

While not defending Russia’s actions in the 2016 election, we should also be looking more carefully into the actions of John Kerry’s State Department under President Obama.

It is fact, as laid out in the Congressional investigation, that money from the State Department was used to directly interfere with the elections in Israel. That grant was also used to hire 270 Strategies, which was formed with the intent to get Hillary Clinton elected. It is also fact that when questioned about the involvement, at least one State Department official attempted to cover up the trail by deleting emails. This has all the makings of a government-run scheme to undermine the sovereignty of Israel and to put one of their own, Hillary Clinton, into the White House.

Meanwhile, 270 Strategies continues to bathe in irony. Lynda Tran, a partner at 270 went on Fox News Sunday calling for more details about Trump’s ties to Russia,

Key point on @FoxNews @foxandfriends this AM: We don’t know the details of the relationship between #Russia and #POTUS — and we ought to. pic.twitter.com/Q6rf9GWwvc

Perhaps Tran should move out of her glass house.

Editor’s Note: The story was corrected to reflect Peter Daou’s role as an advisor to OneVoice and to V15. A previous version said Daou led the organization.