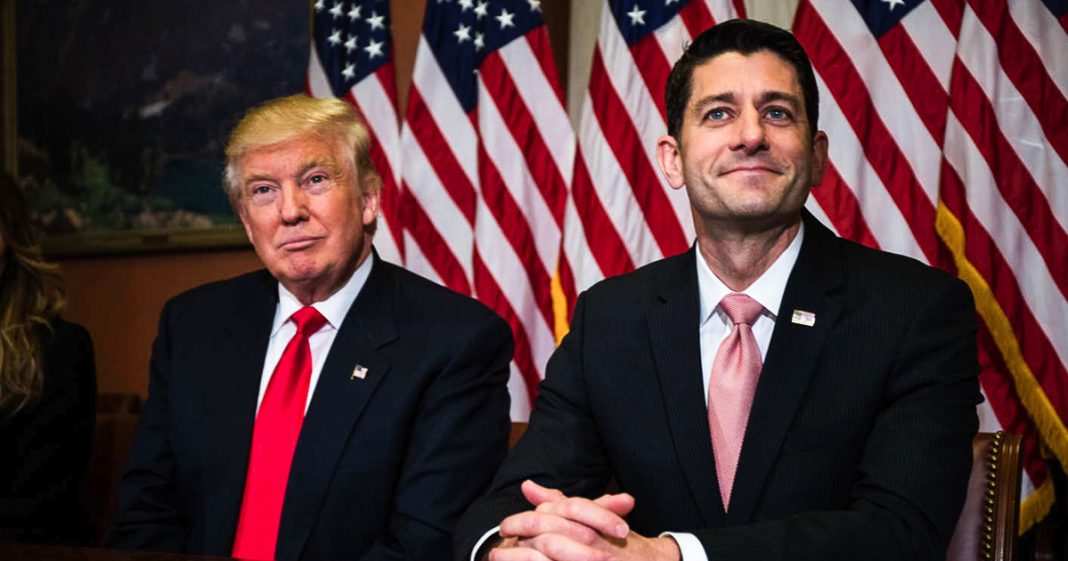 The way Republicans define healthcare “access” means if you have the money, you will be able to buy it. Which of course is not access in any type of meaningful way. Heather ‘Digby’ Parton joins Ring of Fire’s Sam Seder to discuss the GOP’s plan to repeal and replace Obamacare.

Sam: Heather, aside from the attack on immigration as an American principle in his speech and what seemed to be a constant refrain of ‘America first’ which, again, also has unfortunate origins, one of the things that Donald Trump addressed was repeal and replace of Obamacare. This week, Republicans were meeting on Capital Hill in a desperate attempt to try and agree on a replacement for Obamacare, which would be funny if it wasn’t so sad since they’ve been working on it for six years. Maybe, really, I guess, seven or eight. They’ve been voting on it for six years.

They passed one in 2015 that they no longer like, and Donald Trump laid out five principles to healthcare, which basically were bromides that cannot achieve what … You had mentioned slight of hand in the last segment, but there as also a lot of slight of hand with this. There was things like no one who has a pre-existing condition will lose access to health insurance. The way these guys define “access” means if you have the money, you will be able to buy it. Which of course is not access in any type of meaningful way.

Heather: No. In fact, Paul Ryan, he was tweeting about Obamacare last week. He was going on about, ‘Finally people will have the freedom to buy the kind of health insurance they want.’ People always had that. It’s never been a matter of … Even people with pre-existing conditions could theoretically find ways to access health care. It’s not like they turned you down at the hospital door. They demanded that you pay up front. Right?

Heather: I mean, it’s always been a matter of having the money to actually pay for this extremely expensive commodity, which I guess it isn’t really a commodity, service that people may or may not need. The idea that it’s freedom that people are looking for with healthcare is the fundamental misunderstanding. People are looking for security, not freedom. Nobody wants to be shoved into some health system that they don’t like, but as compared to not having heath care, people are happy to be able to have some security over having “freedom.”

I think that’s the basic conundrum that Republicans are dealing with on this, because they don’t have a framework for how to provide something that people need, to provide a sense of security because they don’t care about that. That is just simply not part of their fundamental philosophy of how the world works. Now, they’re faced with people have seen what it is, to have real access to health insurance that you can afford which is the real issue there. Having the security of knowing that if you get sick, you’re going to be covered, and have some way of being able to survive it without losing everything you have. Now the people have seen that possibility of that, it’s going to be very, very, very difficult to take it away. They’re having to face that now, and it will be … We’re looking at a very interesting legislative story unfolding.

Sam: Yeah. The central dilemma, like you say, I think that Republicans have is that for many years there was at least, if not genuine, at least a broad based agreement that on principle everyone should have health insurance. Over the years, that has mutated where the Republican Party, their principle is that we should not be paying for people’s healthcare, and if they can get it, great. They still have to pretend that they agree with the central problem which is that people lack health insurance. Their solutions are jerry-rigged in some way to make it appear that people will have health insurance when in fact they won’t.

On top of that, the other half of that equation that you talked about with Ryan, was when they say freedom to get the health insurance they chose, basically it is as if I said to you, I don’t have the freedom to go buy a car that doesn’t have an engine because of these government regulations that say if you’re going to call something a car, it needs to have an engine and it needs to run. All these lemon laws and all these car buyer bill of rights type of things are interfering with my ability to get a really cheap car.

The only difference is is that when you buy health insurance that has yearly or lifetime caps or is subject to rescission or doesn’t cover a whole swath of types of care, you don’t know it until it’s too late. You don’t know it until you’re, to belabor my metaphor, you’re on the highway and the hill that you just coasted on to get on there from the dealership has flattened out, and your car’s not moving. You don’t realize it until that point. That is their central dilemma. It’s going to be interesting to see if they’re not able to pull this off, how much of a price they’re going to pay with their constituents.