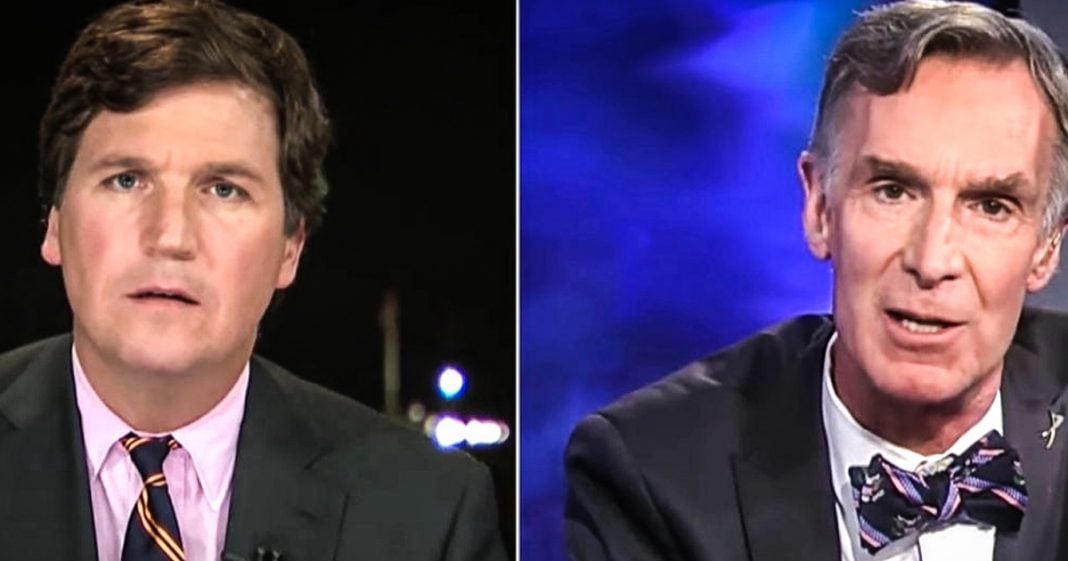 Fox News host Tucker Carlson thought it would be a good idea to debate Bill Nye the Science Guy about climate change on the air this week, and the only thing he proved to his audience is that he’s quite possibly one of the dumbest people on television. Ring of Fire’s Farron Cousins discusses this.

Earlier this week, Tucker Carlson realized that’s it’s probably not a good idea to ever debate somebody who is smarter than you. On his Fox News show, Tucker Carlson thought it would be a good idea to bring on Bill Nye the Science Guy and debate the issue of climate change. It went exactly as you would expect. Take a look. See here’s the thing, Tucker Carlson during this video, during this interview proved that he could actually be one of the dumbest people on Fox News, and that is saying a lot. It’s not only because of what he said. It’s because throughout the entire video he had that dumb ass look on his face like he had no idea what was coming out of Bill Nye’s mouth.

He couldn’t wrap his brain around it, so he just sat there staring at the camera like an idiot. Beyond that, as Bill Nye points out in the video clip, Tucker Carlson waited an average of about six seconds into Bill Nye’s responses before he would interrupt him and not let him finish talking about climate change. He ended the segment by telling Bill Nye I’m open minded, but you’re not. What the hell does that even mean? Climate change isn’t something that you have to be open minded about. It’s science. That’s what’s so great about science. Whether you like or not or are open minded or not, it’s real. It’s indisputable at this point, but Tucker Carlson can’t understand it.

It confuses him and that angers him because he just doesn’t know any better. He’s just learning and he’s doing his best, I guess, but man, he is doing so much damage to the public discourse at this point that he just needs to give up. Don’t talk about climate change one way or another at this point, Tucker, because it’s something that you don’t understand. It’s something that obviously your viewers aren’t going to understand. Even talking to someone like Bill Nye, who’s not even a climate scientist and was not explaining it in complex terms, even that wasn’t enough to help you understand it. God forbid you ever have to talk so somebody like Dr. Michael Mann or Bill McKibben, people who’ve dedicated their lives to this issue.

You picked probably Bill Nye based on his celebrity status. You thought maybe you could run him over and you couldn’t even do that. Give it up, Tucker. Stick to issues you understand a little better, perhaps coloring. But climate change, it’s a little too complex for your simple mind to be able to understand it.