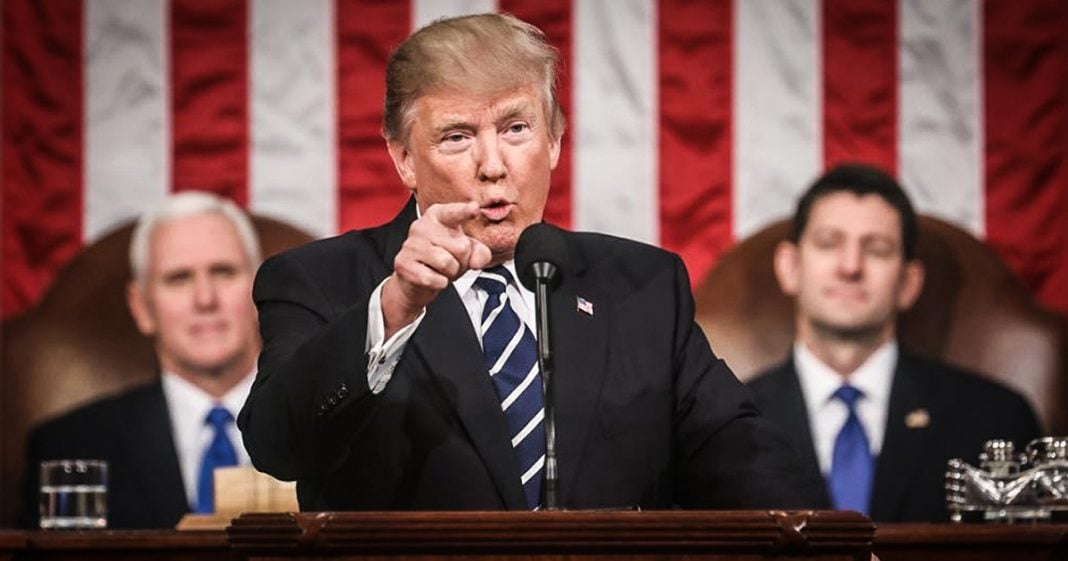 Tuesday night, President Trump made his first address to a joint session of Congress marking the first major speech from the President since the Inauguration. While the speech showed a different side of Trump – one that stuck to the script and used optimism instead of random gloating and attacks on the media – it also continued to show the President’s insistence on waging a unilateral war against undocumented immigrants. Ring of Fire’s Josh Gay discusses this.

Tuesday night, President Trump made his first address to a joint session of Congress marking the first major speech from the President since the Inauguration. While the speech showed a different side of Trump – one that stuck to the script and used optimism instead of random gloating and attacks on the media – it also continued to show the President’s insistence on waging a unilateral war against undocumented immigrants.

In his speech, Trump praised VOICE, a newly created office of the Department of Homeland Security as a way to “support victims of crime” from unauthorized immigrants. However, this move simply serves as a propaganda tool to sell the administration’s aggressive and expensive measures to the public.

Trump says that the media ignores victims of crimes committed by undocumented immigrants, but expects us to ignore his over-reaching actions to shame those looking for a better opportunity.

Under this new plan, the public will be given a weekly report detailing where alleged criminals are from and where they currently live. Of course, the administration is sure to highlight immigrants from Mexico to build a stronger case for his wall and enforce sanctions if Mexico doesn’t bow to his demands. DHS’s own documents say that they plan punish foreign governments that don’t play along with Trump’s deportation plans.

The President’s report will also include information as to why any detained non-citizen was released and where they were let go. This information will undoubtedly be used to embarrass so-call sanctuary cities, that refuse to buy into Trump’s campaign. Many communities rely on the labor of undocumented workers to do the jobs that most Americans would refuse. These communities will certainly suffer economic consequences from this smear campaign.

The President made a point to present undocumented immigrants as violent criminals so he could better market his plans to the American people. So what sort of crimes WILL the administration target in their sweeping reforms? The DHS has spelled out in writing, that they consider that simply BEING in the country as an undocumented immigrant is enough of a crime for them to target someone — not only their propaganda campaign, but also for deportation.

To echo recent comments by Chuck Schumer & Lindsey Graham, if someone commits a crime in this country, we should punish them according to the law, regardless of their immigration status. But, countless studies have shown that the immigrant population, yes, even those here without visas or citizenship, commit less crimes than the average American.

It is increasingly clear that Donald Trump and his supporters seek to address immigration concerns through strong-armed tactics meant to intimidate non-citizens in our country and discourage those who seek a better life in the US from coming here in the first place. Sure, we need to address our immigration issues. There are many things about our system that have failed both naturalized citizens and immigrants alike. That failure has indeed led to an increased tax burden and a border that isn’t properly secured –which IS a potential threat to our national security. But, far too many well-meaning immigrants are facing inefficiencies and backlogs. Bureaucracy has made LEGAL immigration unnecessarily difficult. Those are REAL problems. But even Paul Ryan says that our measures to improve should be WELCOMING, not threatening. The President and his administration must realize that immigration is what built this beautiful country and the spirit of those coming here to chase a dream is part of what makes America great.