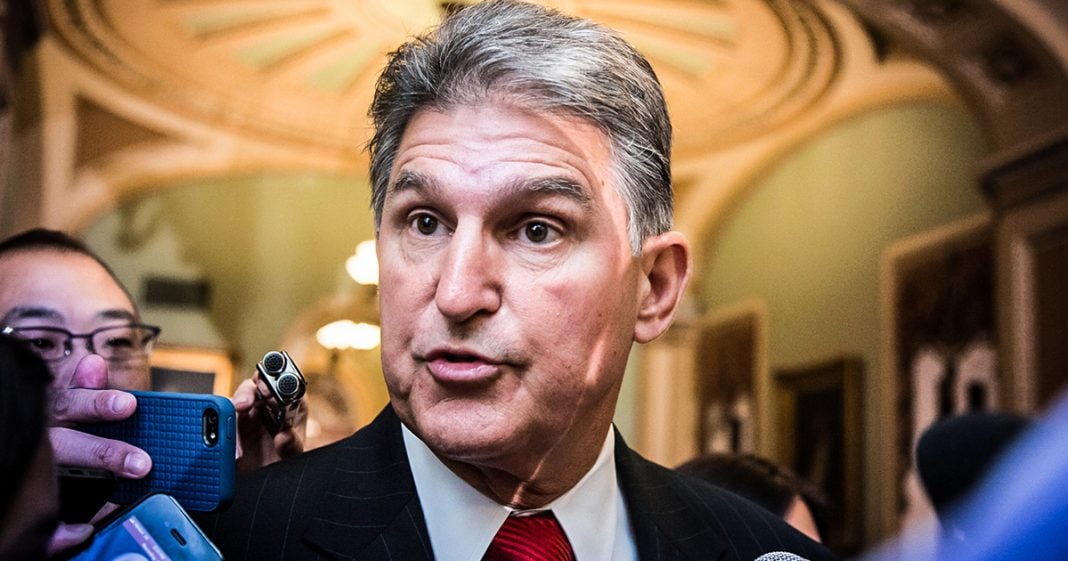 Democratic Senator Joe Manchin has never been considered a progressive, but his latest statements about the so-called “hardcore left” should give Democrats more than enough reasons to boot this man from the Party. Ring of Fire’s Farron Cousins discusses this.

Democratic Senator Joe Manchin from West Virginia has never been someone who has been accused of being a liberal, let alone a progressive. During an interview this week on the Laura Ingraham Show … Fittingly that Joe Manson would go on a right wing talk show … he expressed his frustration not only with the Democratic Party, but with what he considers to be the hard-core left. I guess you would call that the Bernie Sanders wing of the Democratic Party. He says that this hard-core left is just disconnected from the people, from the people of the United States. The hard-core left doesn’t understand what people in this country really want.

Now, I take extreme issue with this, because it seems to me like the only group in this country that understands what American citizens want is this so-called hard-core left. You know, the people who think that you shouldn’t go into bankruptcy because you can’t pay your medical bills. The people who think that it’s not right for students to have to take out $80,000 in student loans just to get a college education just so they can get a good job. I’m sorry. Is that disconnected from the people to think those things?

Is it disconnected from the people to think that we need to treat everyone, regardless of age, race, gender, sexual orientation … Is it wrong that we need to think that we’re all equal? Because that’s what the hard-core left believes, but not people like you, Joe Manchin. Joe Manchin, as a Democratic Senator, has been probably one of the best Republican Senators. He consistently votes against the rights of consumers, consistently votes against any kind of environmental protection, and he does it to pander to the people in his home state of West Virginia, who are dependent right now upon the coal industry, which is dying. He blames that on the Democrats. He blamed that on Obama.

The coal industry in West Virginia, in Joe Manchin’s state, is dying because global demand for coal has diminished. It’s going to continue diminishing. You’re not going to bring those coal jobs back, but Joe Manchin wants his voters to think that Democrats and the Bernie Sanders wing of the Democratic party, progressives, people willing to speak out … He wants you to think that they’re the enemies. Joe Manchin represents every single thing that is wrong with the Democratic Party. As it stands right now, he’s in a leadership position in the Senate, among the Democratic leadership.

He needs to be removed from the party. He is up for reelection in 2018, and let me tell you, I don’t know if he’s going to seek reelection. I assume he is. I don’t know if he’s going to be primaried by a Democratic challenger, and I don’t know who his Republican replacement or opponent is going to be. But I can tell you this. I hope to God that whoever wins that election is not Joe Manchin. I would rather see a Republican take that Senate seat than to have some jackass like Joe Manchin sitting in the Senate saying that people who want equality, people who want to take care of each other in the United States, are disconnected from the people. Joe Manchin does not deserve our time, our effort, our energy, our money, any fundraising. He does not deserve to be in a position of power representing the American public, but he is. In two years, we can fix that problem.