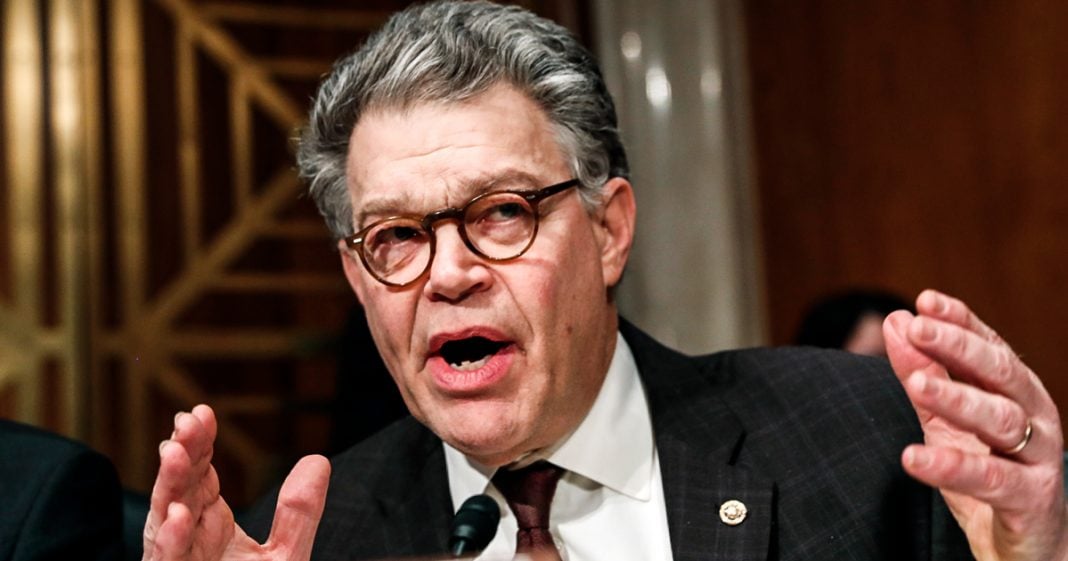 Democratic Senator Al Franken has written a letter to FBI director James Comey demanding answers as to why the FBI is treating some of the Dakota Access Pipeline protestors as suspected terrorists, when none of the people under investigation were ever accused of being violent or even of being a threat.  This is the first step towards a complete ban on civic activism, and that’s exactly what Trump and the Republicans want. Ring of Fire’s Farron Cousins discusses this.

Senator Al Franken is demanding answers from James Comey the head of the FBI as to why the FBI is treating some of the Standing Rock protestors as if they are terrorists. According to a letter that Franken sent to James Comey the JTTF, the Joint Terrorism Task Force, is investigating and questioning no fewer than three people who were protesting at the Standing Rock camps during the entire Dakota Access Pipeline protest. Now the JTTF does not typically investigate terrorists. In fact, excuse me they don’t investigate protestors, in fact they never do that. For some reason the FBI under James Comey, under Donald Trump, is treating protestors in the United States as if they are terrorists and it’s not just what happened at Standing Rock, we also know that people who attended the inauguration day protests and marches, they’re being investigated by the FBI by the Department of Justice, required, or I should say, the DOJ is asking Apple and Google and Facebook to turn over private user data of some of the people arrested during those marches. Why is dissent in this country being punished? Why is dissent being treated like it’s terrorism?

Hell, dissent is literally in our framework as a country. We have a Constitutional right to assemble peacefully, and now I know that not all of the protestors or marchers have been peaceful. There have been unnecessary acts of violence, but those aren’t the people being investigated. The people being investigated as far as we know, according to this letter from Al Franken, according to the data that we’ve received about the people arrested at the inaugural marches, these are just people. They were just there. They weren’t causing problems. They weren’t violent. They didn’t harm anyone. They didn’t threaten anyone, but they’re being treated by the FBI as if they are some sort of domestic terrorist that we need to be concerned about. Dissent in the United States today is becoming illegal. It is becoming an offense that can land you in jail, that can get you investigated by the FBI. Things that literally will destroy your future if anything comes of that, or if the administration decides to make this even more of a crime than it currently is.

This is authoritarianism, this is Fascism folks. That’s what’s happening in America today. Donald Trump’s fine with it. The FBI’s playing along. Thank God we do have some people like Senator Al Franken who are demanding answers from the FBI to say “Why are you treating these people who were trying to protect their drinking water, these sacred Native American sites, why are you treating them as if they wanted to bomb a building or shoot a bunch of people?” This doesn’t make sense and this is not the country that people like Al Franken were elected to serve, so they’re going to keep demanding answers. The only question now obviously is whether or not the FBI is going to give them. If what we’ve seen so far from the Trump administration is any kind of indicator, we likely will not have any new information as to why the FBI thinks that somebody protesting to protect water is just as bad as somebody that wants to kill American citizens.