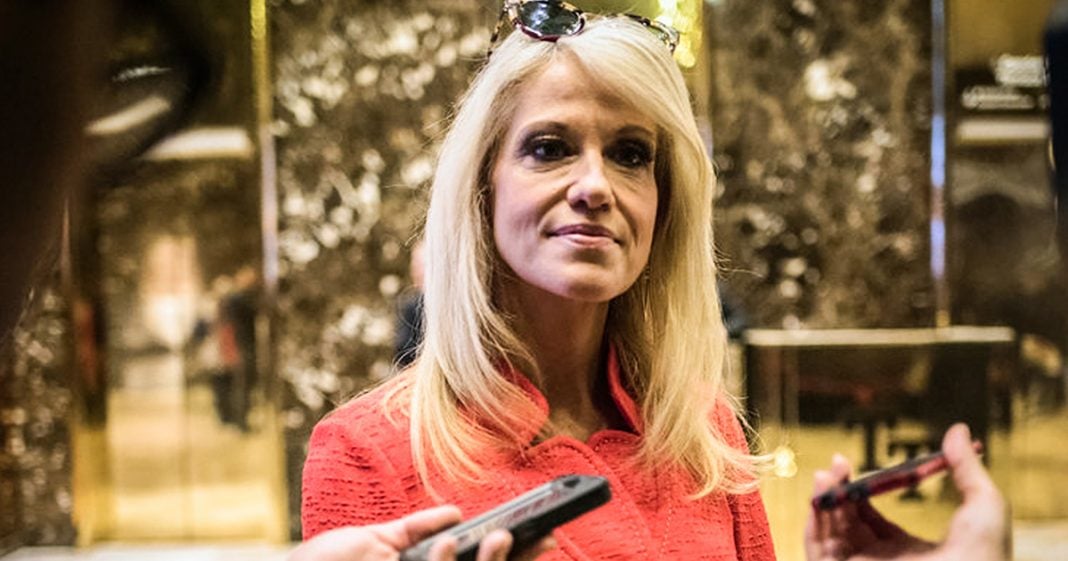 Kellyanne Conway can do no wrong in the eyes of the White House, and they announced this week that she will not be facing any sort of punishment for appearing on national TV and doing an impromptu infomercial for Ivanka Trump. Ring of Fire’s Farron Cousins discusses this.

Good news, everybody! The office of White House Counsel officially announced this week that they will not be issuing any disciplinary action against Kellyanne Conway for her Ivanka plug that she did after Nordstrom said they were not longer going to carry her products and Kellyanne Conway went on Fox News and said, “Buy Ivanka’s stuff.”

Now, this is expected basically. We knew that the White House was not going to discipline Kellyanne Conway, at least not officially, because when you think about it, they did discipline her. She was pulled off of TV for almost an entire week recently. Not just because of the Ivanka plug, but because she is such a liability for the Trump administration and they have no idea what she’s going to say when she gets in front of a camera. She’s dangerous because she can’t be controlled and the White House knows that, but they also know that as much as she is a liability to them, she’s also one of their greatest assets.

Now, Conway is a great distraction for Trump, and that particular incidence, the couch incident, proves it. She can take attention away from whatever he does, so of course they’re not going to discipline her. They need her. They need her to go out and be the useful idiot that she is. She’s a rodeo clown. You bring her out to distract the bull, which I guess in this case the bull is the media, while the cowboy runs to safety, and that would be Donald Trump. No offense to cowboys, there, but that’s who Kellyanne Conway is, she’s the rodeo clown. She’s the distraction. She’s the bright, shiny object that we should all be focusing on instead of talking about the fact that Donald Trump is clearly violating the emoluments clause by not divesting from his businesses and not putting everything in a blind trust.

Instead of talking about that, we have to talk about Kellyanne Conway going on Fox News and saying, “Go buy Ivanka’s stuff.” Again, there’s no surprises here that the White House is not going to discipline her in any real way. In fact, if anything, they’re going to put her out there in the media even more, because again, she is this administration’s useful idiot, and they pull her out and put her on TV anytime the heat gets a little too hot on Trump himself.