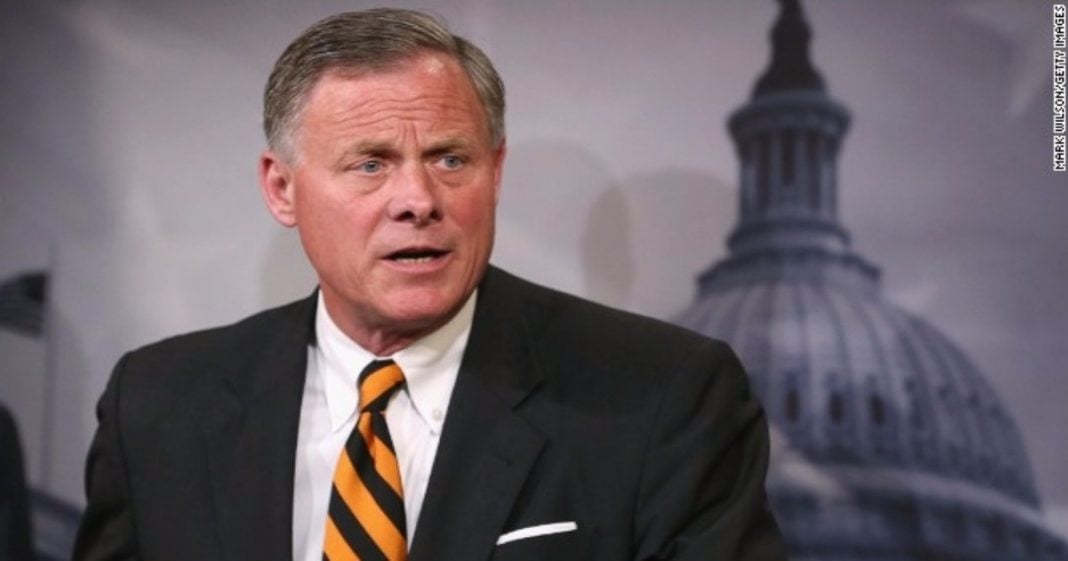 As Chair of the Senate Intelligence Committee, GOP Senator Richard Burr of North Carolina has a clear conflict of interest that is threatening to derail any investigation of Donald Trump and his alleged ties to Russia – namely, he is one of Trump’s most devoted lapdogs.

It helps to explain why Congressional Republicans recently killed a Democratic “Resolution of Inquiry” calling upon the Department of Justice to turn over all documents related to “criminal or counterintelligence investigations” involving Trump and any White House staff allegedly connected with Russia and his many business conflicts (as if the new Attorney General would have complied in any event).

For example, last week Burr joined others in coming to Trump’s aid in the wake of news stories alleging several communications between the Trump campaign and the Kremlin in attempts to refute the story and discredit reporters. During last year’s campaign, Burr played a major part in getting the FBI to harass Hillary Clinton over her emails, something of which he has boasted. At the same time, while running for his third term, he assured his constituents that he and Trump were as thick as proverbial thieves. All of this, according to Senate Minority Leader Chuck Schumer, “certainly gives the appearance, if not the reality, of a lack of impartiality.”

Burr’s allegiance to Trump is causing problems within the committee as well. Senator Mark Warner (D-VA), Vice-Chairman of the Intelligence Committee, has also expressed “grave concerns” over the objectivity of the investigation, while GOP member Susan Collins of Maine said the committee must “avoid any actions that might be perceived as compromising the integrity of our work.” Warner himself warned that unless he was convinced that the Senate investigation was proceeding in an objective manner, he would call for an expansion of the probe.

Similar infighting is developing on the House Committee as well. Two Representatives from California, Republican Devin Nunes and Democrat Adam Schiff, have sparred over whether or not there is any evidence of contact between Trump’s campaign and Moscow. On the other hand, GOP Representative Darrell Issa called for a special prosecutor to look into the matter last Friday, but changed his mind on Monday, telling CBS News that “there’s been no allegation by any part of this administration or by anyone who’s been to the hearings about any crimes.” At the same time, Democratic Representative Elijah Cummings of Maryland spoke out over the weekend, calling for an independent commission to investigate the allegations against Trump, pointing out that

“The American people will not stand for an investigation that is tainted, that inappropriately shares information with the President’s team, or that serves as nothing more than the President’s political mouthpiece.”

Unfortunately, that is what appears to be shaping up.

It gets worse: last night, the Washington Times and the Washington Post reported that the new U.S. Attorney General, Jeff Sessions, had two conversations with Russian ambassador Sergey Kislyak during the campaign last year – a little fact he neglected to mention while under oath. That makes any assistance in an investigation of Trump’s Russian connections very unlikely – and further underscores the need for a special prosecutor to investigate these serious allegations.