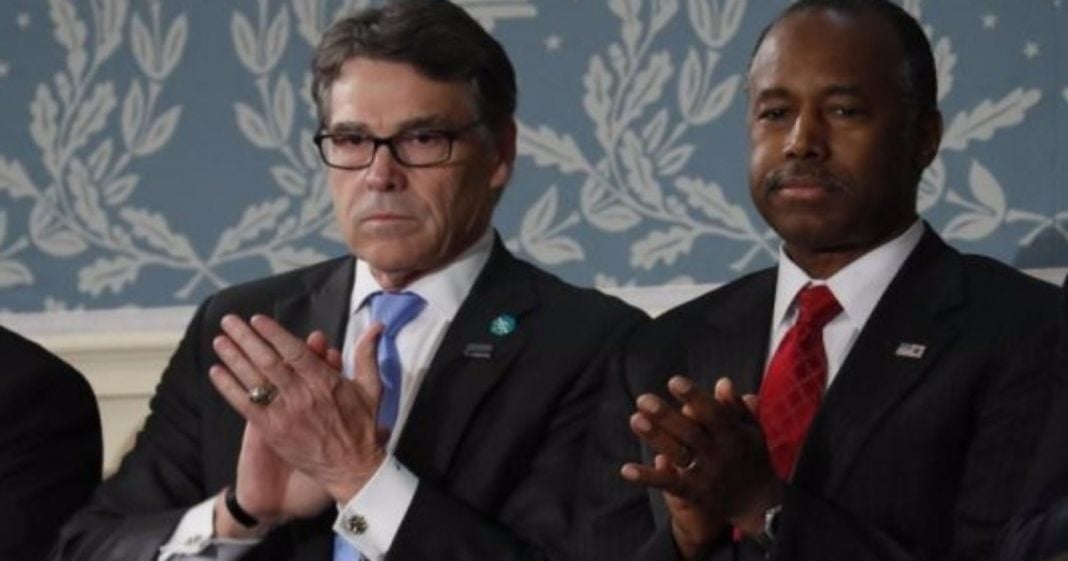 On Thursday, failed presidential candidates Ben Carson and Rick Perry were confirmed by the Senate for their respective cabinet positions, marking two more additions to the Trump administration.

With these confirmations, Ben Carson will now head the Housing and Urban Development agency while Perry will be responsible for the agency he tried to dismantle, the Department of Energy.

Carson’s confirmation was not unexpected, even considering that the retired neurosurgeon appeared to lack and qualification for the job. During a smaller Senate hearing before the final vote, Senator Elizabeth Warren voted for Carson, citing his apparent openness to many of her concerns. Surprisingly, when it came time for the final vote, Warren flipped and voted against Carson, apparently heeding the push-back from her supporters. The final vote in favor of Carson was 58 to 41.

Perry’s confirmation was also relatively non-controversial, at least compared to many other confirmations that have already made it through. And yet the former Governor and Dancing With the Stars contestant appears to have zero qualifications to lead the complicated Department of Energy, a department that he suggested eliminating during his presidential run in 2012. Opponents to Perry’s confirmation noted that despite having no professional qualifications to lead the department, Perry’s education – a degree in animal science – also left him woefully unprepared. Even still, Perry was confirmed 62 to 37.

So why didn’t we hear a lot about these confirmations considering how significant they are? The lack of media outrage is likely due to the number of shocking confirmations we have already seen. When you’ve made Jeff Sessions the Attorney General and Betsy DeVos the head of the Department of Education, what’s a Carson and a Perry on top?

You probably also didn’t hear a lot about these news stories since there is a veritable avalanche of news being dumped hourly by this particularly scandalous administration, but it is still important to take note of the confirmations of these two wholly unqualified cabinet members.