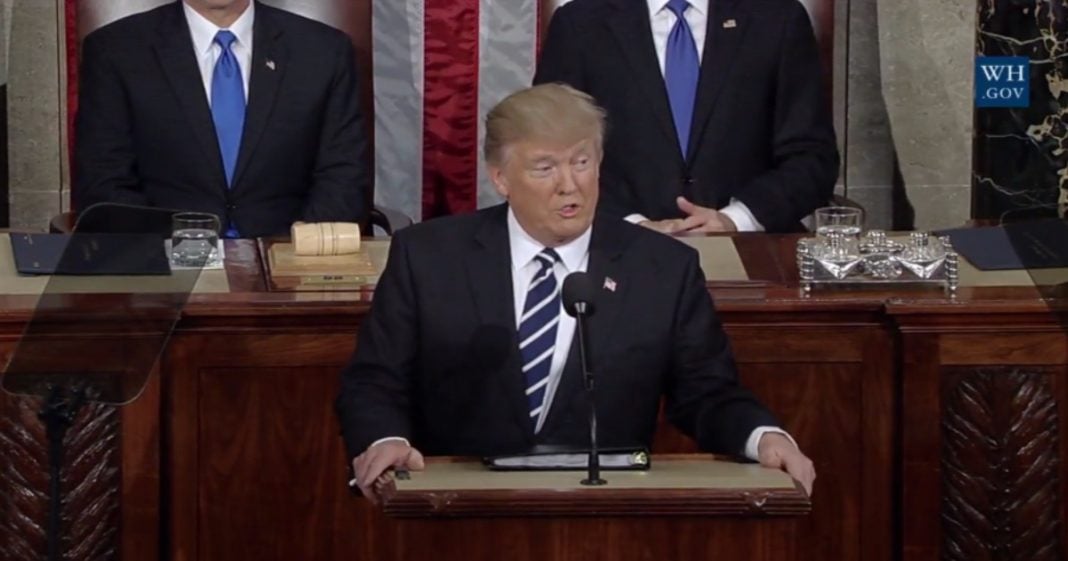 Sticking to the script seems to be President Trump’s key to more effectively communicating his goals. In his first speech to a joint session of Congress he showed poise, confidence, and a surprising compassion that had been lacking from his first weeks on the job and even his months on the campaign trail. However, one speech does not correct the ills of his tumultuous first days in office.

While the president continued the same themes of turning the administration’s focus to domestic issues, the tone was dramatically different from his gloomy inaugural address. It was clear from his opening imagery of improved infrastructure, reduced inner-city crime, and ending drug proliferation that he was attempting to paint a more optimistic picture of the country’s outlook. The President’s stated commitment to what he called, “a new program of national rebuilding,” drew some bipartisan praise, yet some conservatives were left to wonder how to pay for Trump’s plans.

The POTUS also made a concerted effort at reaching out to women in his address. As a large number of Democratic women in attendance wore white – the color of the women’s suffrage movement – in a show of unity against Trump’s previous misogyny, the President lauded a joint program with Canada to enhance the efforts of women entrepreneurs. He also broadly supported efforts “to make childcare accessible and affordable, to help ensure new parents have paid family leave, to invest in women’s health.” Critics say this may very well be nothing more than empty talk from Trump.

However, for any positives taken from the speech, the President fell short of convincing detractors that he intends to adjust his most controversial stances or scale back his exaggerated claims. Even his favorite boast of ‘draining the swamp’ was met with sarcastic chuckles from the audience.

Trump touted his controversial executive order which enabled the Department of Homeland Security to create an office that is simply tasked with publicizing crimes by immigrants,

“The office is called VOICE –- Victims Of Immigration Crime Engagement. We are providing a voice to those who have been ignored by our media, and silenced by special interests.”

This action is seen by most as merely a measure to pressure so-called sanctuary cities to get in line with his aggressive deportation tactics and help sell his border wall to the public. In the last few weeks, the administration has had to answer questions about proposed military involvement in rounding up immigrants, as well as defending moves that eliminate privacy protections for non-citizens. Including VOICE prominently in his speech did little to calm those criticisms.

The President also has drawn sharp critique for his continued insistence on repealing the Affordable Care Act without a reliable alternative being proposed. Trump pointed to the program’s shortcomings, like increasing premiums, while also applauding some of the plan’s most valued tenets, like caring for those with preexisting conditions. But he did not offer substantive ideas on how to reconcile the toughest issues: When the President mentions tax credits to help Americans afford the healthcare they chose, that also means there will be even less funding to help those that cannot afford care.

The President also claimed that he wants to work to drive down pharmaceutical costs. However, he (as well as members of both parties) have been hesitant to hold drug manufactures accountable for rampant price inflation through lobbying and price fixing. Trump has even turned to the CEOs of big pharma for advice on fixing the problem they created.

Ultimately, one speech does not give us enough evidence on whether or not Trump will be easier to work with going forward. The President’s first month in office was turbulent to say the least. Attacks on the media, bizarre cabinet picks, and a reluctance to work with detractors set the tone for a chaotic administration. While most polls show that Trump gained some favor last night, it is also obvious that he has to do a lot more to ease the concerns of conservatives and liberals alike.

Sure, there will always be those that support him no matter how he acts. On the flip side, there will also be those that will find it impossible to agree with the President on any measure. But the success of Trump’s Presidency will ultimately be measured by his ability to stitch together the vast wound opened across this country during the 2016 election, mostly by the President’s own actions and words.

This speech should be seen as a small step in the right direction, but it will take massive leaps to truly bring us together. The President talked a big game, but his actions will tell his true intent.