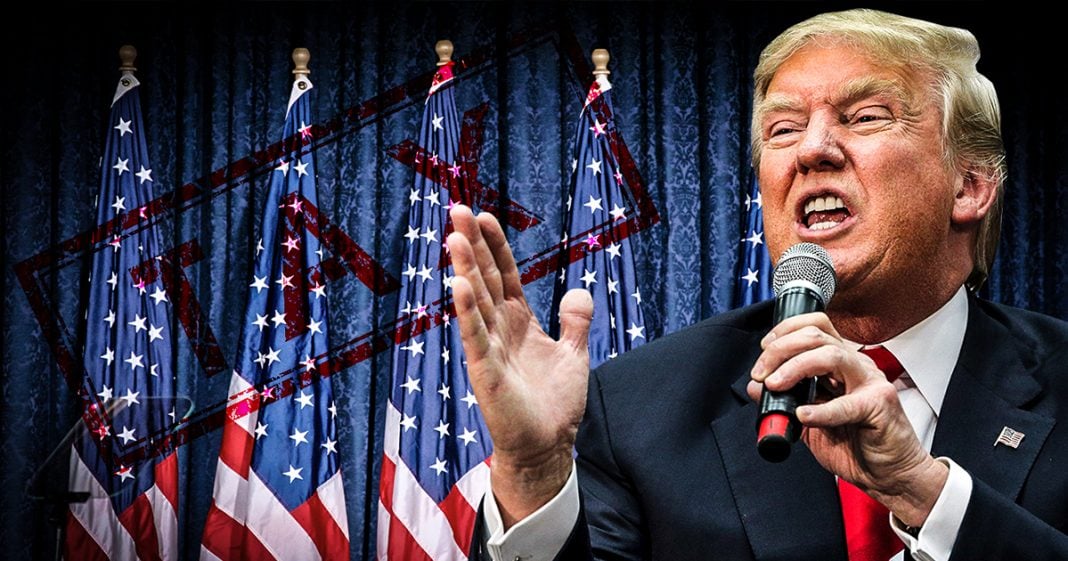 Donald Trump, like George W. Bush, has pitched his tax plan to the public as a way to ease the tax burden and provide relief for the middle class. But analysis of his plan shows that the majority of the cuts will go to the top 1% of income earners, with 25% of the cuts actually going to the top 0.1%, while those in lower income tax brackets will actually see their taxes increase! Ring of Fire’s Farron Cousins discusses this.

We finally get a glimpse into what a tax plan from the Trump Administration is going to look like and who it’s going to benefit. Earlier this week, a draft of the Trump tax plan, which still has to go before Congress was released, and in that tax plan 47% of all of the tax cuts go to the top 1%. The people who do not need more tax relief in the United States get almost half of the tax cuts under Donald Trump. 25% of the tax cuts actually go to the top .1%, the people in the United States making more than $3 million a year. Guess what? You’re going to get a tax break, but what about the lower income earners, you know, middle class? What do they get? Well, 6.6% of the total tax breaks go to the middle class. What about the people who earn even less than that that aren’t in the middle class yet? Well, sorry folks. Your taxes are about to go up from 10% to 12%.

That’s right, Donald Trump’s tax plan lowers taxes on people making more than $3 million a year and raises them on people making less than $20,000 a year. It closes benefits, personal deductions. It’s going to eliminate the head of household filing status for single parents. Basically, his entire tax plan is a big middle finger to all of those people that he duped into voting for him, believing that he was actually going to help the middle class. Now, if you remember correctly, back in 2001 when George W. Bush sold his massive giveaway to the wealthy in the form of tax cuts, when he sold that to the public, he said the same thing Donald Trump is saying, “This is about middle class tax relief. We’re going to help the middle class,” and everybody bought into it. They thought, “Hell yeah. My taxes are going to go down. I get to keep more of my hard-earned money.” Well, nope. You voted for a liar, and then you did it again in 2016. You screwed yourself on this even though everybody was telling you that this was going to happen.

We knew that Donald Trump wanted to cut taxes on the wealthy and say forget you to the rest of the country. We knew that. We’ve been talking about it for a frigging year. Donald Trump made no secret about that. That information was readily available to anybody willing to go out there and look for it. So here we are. The Republicans in Congress 100% will go along with this tax plan, because they love giving tax cuts to the wealthy. The wealthy are the ones who fund their campaigns, and if they have more money, then they’ll spend more money on politicians, so yes, this tax plan will pass. Maybe there’ll be a few tweaks to it here and there, but overall this is what the new tax policy in the United States is going to look like, more giveaways to the already wealthy, screwing over low-income and middle-income earners. Meanwhile, all of the benefits, all of the economic growth is once again going to be concentrated in that top 1%.

This will send us into another recession, possibly even worse, because it’s the same failed trickle-down economic theory that has failed time and time again since Ronald Reagan took office in 1981. This is insanity. We know that this doesn’t work. Every single time that it’s been tried it has failed. Why do these morons think that if we do it this time it’s totally going to work, I swear to god. No. It’s happened in state after state controlled by Republicans. Look at what’s happened in Kansas. Their economy is in the toilet because Sam Brownback decided to cut taxes for millionaires and billionaires and raise taxes on low-income earners. The state ended up with no money.

Contrast that with California, whose governor took office the same time as Sam Brownback in Kansas. They raised taxes on the wealthy and lowered taxes on the low-income earners, and guess what’s happened? They’ve added more jobs. Their economy is flourishing. They have a budget surplus in the state of California, all because they made people who can afford it pay a little bit more. Every economic indicator in the state of California is going up. Every economic indicator in the state of Kansas is going down. That’s the difference between liberal and conservative tax policies, but that’s what Donald Trump wants to do to the entire country. We’re all going down. His tax plan is a sinking ship, and he thinks that the millionaires and billionaires are going to save us. Well, they didn’t save us in the early 2000s. They didn’t save us in the early 90s, and they sure as hell didn’t save us in the 80s, so you’d have to be a special kind of stupid to think that they’re going to save us now.