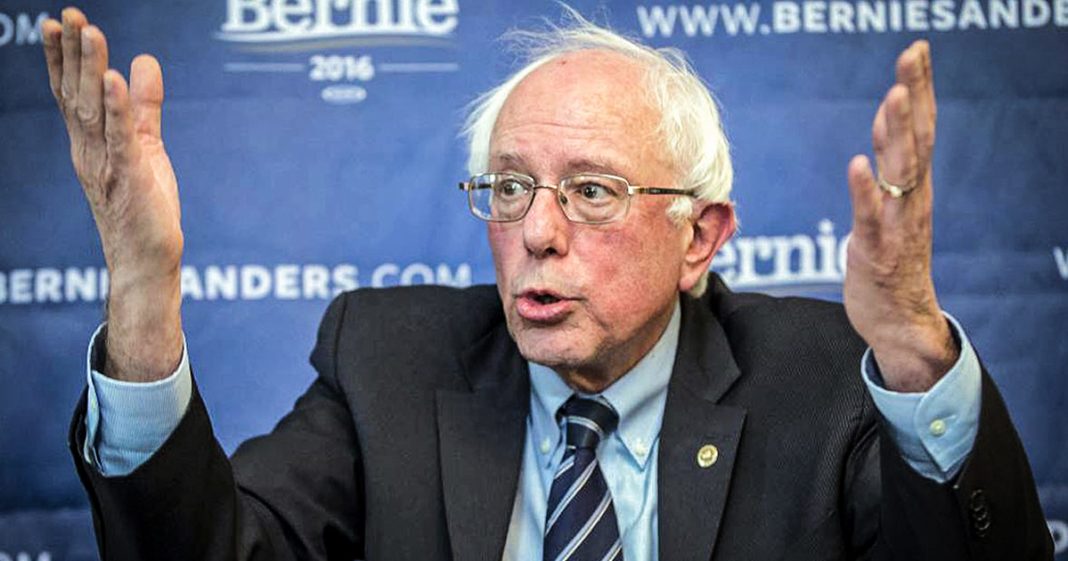 Senator Bernie Sanders has introduced legislation to allow the importation of cheaper prescription drugs from foreign countries, hoping that this time the Democrats will not block this legislation.  Cory Booker has already signed on as a co-sponsor, so that’s a start. Ring of Fire’s Farron Cousins discusses this.

Independent Senator Bernie Sanders is once again trying to lower the cost of prescription medication for American citizens. Remember he tried this. He co-sponsored, co-signed a bill earlier this year that would have allowed the importation of cheaper prescription drugs from other countries but it was a gaggle of actually Democrats, led by Corey Booker … Corey Booker kind of became the face for it. I can’t necessarily say that he led them but anyway it was the Democrats who torpedoed that bill on the false pretenses that these drugs they were going to import were somehow more harmful than the poison we’re putting out from the United States. Completely untrue but that’s the excuse that they gave.

So anyway Bernie Sanders is back at it, but this time he actually has a few Democratic allies. The people that have co-sponsored this bill that would allow the importation of cheaper prescription drugs include Senators Corey Booker, Bob Casey, Martin Heinrich, Angus King, Representatives Elijah Cummings and Lloyd Doggin. Finally we have some more Democrats including the ones who voted against this legislation last time finally jumping on board, understanding that the American public is pretty pissed off right now. See, to be honest I don’t believe that Corey Booker’s had a change of heart. I believe that he sees what’s happening with Republicans and some Democrats all over this country in their town hall meetings, that people are angry about the cost of healthcare, they’re angry about the cost of prescription drugs. They were angry at him when he voted against the original legislation, so he decided he’s not going to take any chances and he has jumped onto this bill.

There are some provisions in this bill that make sure that these drugs are perfectly safe, that they’ve gone though the same kind of testing we do here in the United States, but again the testing we do in the United States is actually a lot more lenient than the testing done up in Canada. Not to mention the fact that our FDA and regulatory agencies are essentially owned by big pharma at this point, so yeah, I’m going to trust a Canadian drug over an American drug every day of the week. But here’s the thing. There’s not quite enough Democrats who have signed on to this legislation just yet. There needs to be more.

Because what’s going to happen if this legislation fails, if a single Democrat votes against it, they’re going to be facing the same sort of public backlash that these Republicans are facing and deservedly so. Now, when this legislation was first introduced a month or two ago, you actually had I believe 11, 12, 13, something like that Republicans that signed onto it, including Ted Cruz and John McCain, but it was the Democrats who voted against it that effectively killed this legislation.

This time again Bernie Sanders has sought the support of the Democrats. He’s gotten their input, taking it into consideration, put it in this legislation so there are no excuses this time. If a Democrat votes against this legislation, there is no other reason than the fact that you are owned wholly and completely by big pharma. We need prescription drug relief here in the United States. We should not be paying several hundred dollars every month for generic versions of life saving medication that we can either take or die. That’s not fair. The government subsidizes big pharma. They subsidize their research and development. They subsidize their testing of prescription drugs, so don’t buy the BS that these companies have to charge such high prices because if they don’t they’re going to lose money.

No, that is not true. The government makes up most of the different there for research and development and testing. It’s advertising. That’s what American pharmaceutical companies are spending so much of their money doing. The average time it takes to recoup the cost of a brand new drug is two years. After two years, after they’ve made their money back, everything else is profit. Why not lower those prices just a little bit? Just a little? So that we can take our heart medications and our asthma medications and our diabetes medications and ever other medication that we need? That’s what Bernie Sanders is trying to do and let’s hope that this time the Democratic party has enough sense to understand that yes, this is a good idea.