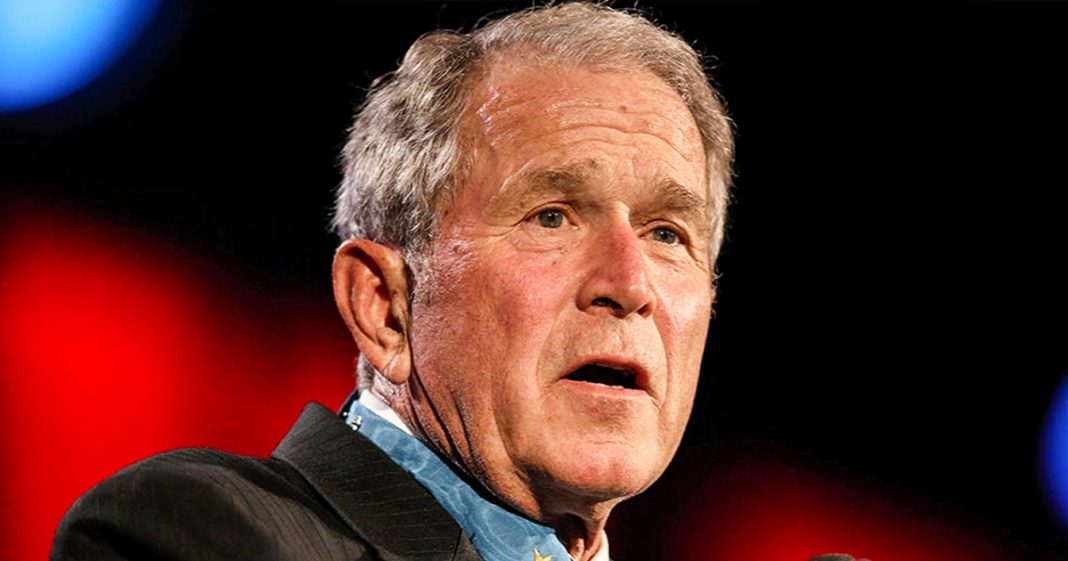 George W. Bush is getting a lot of credit for saying that he doesn’t like Trump’s racism or his immigration policies, but let’s not forget that Bush is the man who mainstreamed the hatred of Muslims based on fear and stereotypes.  He deserves no praise – he deserves to be in prison for his war crimes. Ring of Fire’s Farron Cousins discusses this.

George W. Bush has been back in the headlines this week because he came out and said that one, he thinks an immigration policy for the United States needs to include everyone. We need to let people come in. This is the land of opportunity. A direct refutation of what Donald Trump has been trying to do since he took office. He’s also said, according to The Hill, that he just doesn’t like the racism. He didn’t specifically say coming from the Trump administration but we all know what he meant.

So naturally, all kinds of people are out there right now praising George W. Bush for his bravery in coming out and saying these wonderful things against Donald Trump. He doesn’t deserve a single bit of praise. George W. Bush was a dangerous, unhinged president. He is responsible for the deaths of tens of thousands of American troops overseas. He is responsible for the deaths of hundreds of thousands of Iraqi civilians. He is a war criminal who authorized the use of illegal forms of torture both overseas and at Guantanamo Bay.

There is nothing that this man says or does that deserves any praise. He should be sitting in a prison right now along with the other members of his administration who authorize torture and who lied us into a war that cost us thousands upon thousands upon thousands of American lives. He weakened the United States all over the world, the image that they hold of the United States. He squandered all of the good will that we received after the September 11, 2001 terrorist attacks.

He did that by launching a war against somebody who didn’t even attack us. A war of revenge for his father and a war for oil. Furthermore, for somebody who doesn’t like the racism, he is the one who helped to put the anti-Muslim mentality into millions of Americans. Most of us didn’t really care one way or another before George W. Bush came along. But then he got up on his podium. He made speeches. He went around the country telling us how evil Islam is. That they’re a bunch of terrorists and they hate us because of our freedom. It’s a war on Christianity, we were told. And they were the enemies because they looked different and they worshiped in a different way.

So you may not like the racism coming out of the Trump administration, but you need to understand buddy that you started this. Or you at least put it on steroids. You’re responsible. You dumb down the office of the president so much that 8 years after you left, we put a reality TV star in there. That’s on you. Donald Trump is on you. Sarah Palin is on you. Michelle Bachmann. Louie Gohmert. Ted Cruz. You paved the way for these idiots.

I am sick and tired of people giving praise to this madman because he’s intelligent enough to say that he doesn’t necessarily like Donald Trump. It’s the same thing with John McCain. John McCain is one of the biggest warmongers in Washington D.C. Yet because he occasionally says that he doesn’t like Donald Trump, liberals, Democrats are willing to say, “Hey maybe he’s not such a bad guy.” No, he is. Because while he says one thing about Donald Trump, still voted in favor of all of his nominees and has supported every single policy that he has put out.

Stop praising asshole Republicans who’ve helped to destroy this country. I don’t care if George W. Bush doesn’t like Donald Trump. I don’t care if John McCain doesn’t like him. I don’t care if Michelle Bachmann comes out tomorrow and says that Donald Trump is the worst president we’ve ever had and I miss Obama. That’s not going to excuse anything they’ve done in the past. They haven’t changed their ways. They’re just trying to come up with another way to steal a couple of headlines and remain relevant for a few more days.