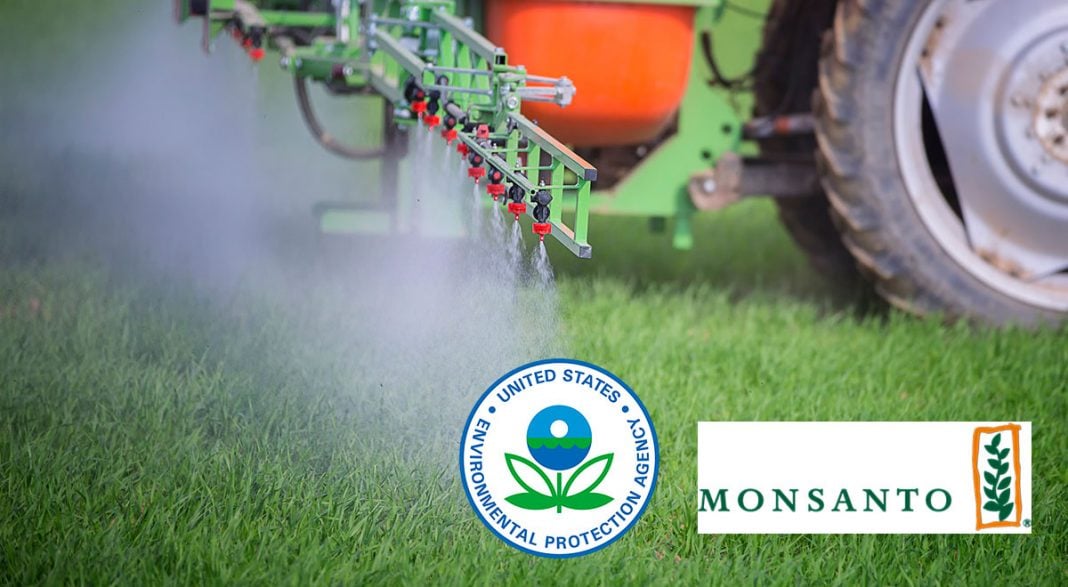 What would be considered a bombshell in normal times seems unsurprising, considering the massive corruption in Washington D.C. these days and federal agencies tripping over each other in order to sell themselves to the highest corporate bidder. That “bombshell,” revealed this week, is that the former Deputy Director of the Environmental Protection Agency, Jess Rowland, may have engaged in a cover up to hide evidence of the cancer-causing properties of glyphosate, the active ingredient in Monsanto’s controversial herbicide, Roundup.

This allegation is from a February 10th filing by cancer victims who are suing Monsanto in a San Francisco federal court. U.S. District Judge Vince Chhabria, who is presiding over the case, agrees that the evidence demonstrates a “highly suspicious” relationship between Rowland and Monsanto, and says, “When you consider the relevance of the EPA’s reports, and you consider their relevance to this litigation, it seems appropriate to take Jess Rowland’s deposition.”

Last April, the EPA posted a lengthy report by the Cancer Assessment Review Committee (CARC) stating that glyphosate was “not likely to be carcinogenic. That report was based on an EPA cancer assessment for glyphosate that Rowland had been responsible for overseeing. It was removed from the agency’s website less than a month later, after it had been leaked to the media, and Rowland resigned from his job only a few days later.

At the time, Representative Barry Loudermilk (R-GA) of the House Science Committee posed hard questions to EPA Administrator Gina McCarthy about the sudden removal of the report, Rowland’s abrupt resignation, and whether there was any connection between the two events. McCarthy dodged the question, stating that it was a “final memo,” that posting the report was a “mistake” on the part of a contractor, and that it had “caused all kinds of conspiracy theories to erupt.”

It gets better: attorneys for the plaintiffs obtained a copy of a letter, dated March 4, 2013, that an agency toxicologist sent to Rowland. In that letter, the late Marion Copley (who died from cancer less than a year later) said that based on the latest studies, glyphosate should be classified as a “probable carcinogen,” and listed more than a dozen health-endangering effects of the chemical. She accused Rowland of playing “conniving political games,” intimidating staff members and altering reports so as to “favor industry.” She also indicated that Anna B. Lowit, director of the EPA’s Office of Pesticide Programs at the time, was taking bribes.

The timing of these revelations isn’t optimal for Bayer AG, which has been attempting to acquire Monsanto and add the company to its agricultural sciences division. Already, investors have been skittish over the takeover because of concerns over regulatory barriers. Should Rowland be called to testify – as seems likely – it could derail the entire deal.

In any event, considering that the federal government has sunk to the lowest levels of corruption seen since the 1920s, it will come as no surprise if Rowland’s testimony confirms what we have all strongly suspected for years: people in key positions at federal agencies that are supposed to be protecting us are no more than handmaidens for Corporate America.