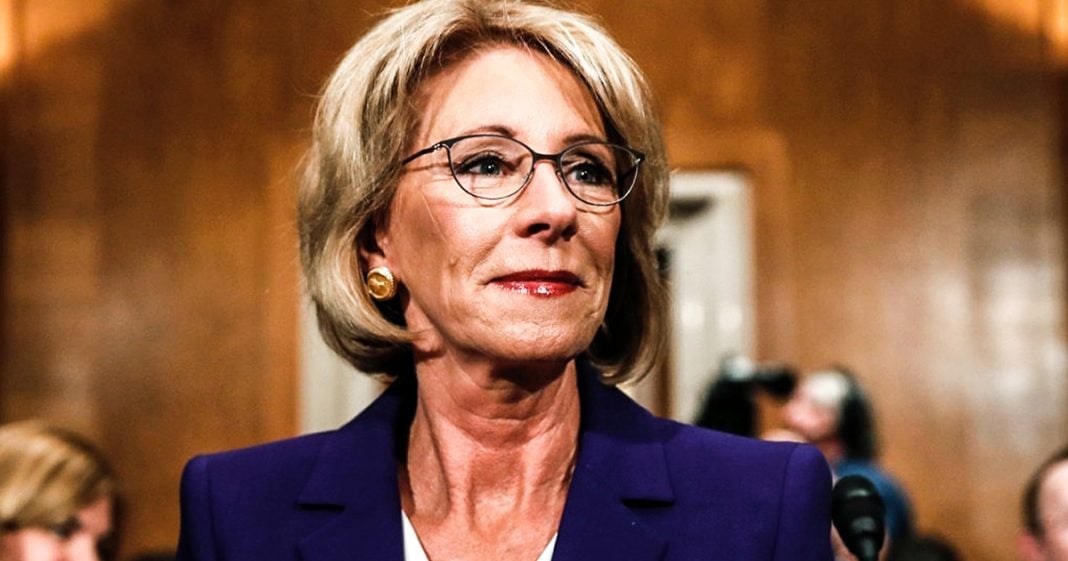 Education Secretary Betsy DeVos might do well to attend a few history classes before she sends out her next press release.  As Trump was meeting with leaders from the Historically Black Colleges and Universities, DeVos’s team issued a press release where she claimed that these institutions are a perfect example of how great “school choice” can be.  She neglected to mention that many of these institutions were the only “choice” for African Americans during the era of Jim Crow segregation, and they were founded because wealthy white people like DeVos didn’t want to sit in the same class as black students. Ring of Fire’s Farron Cousins discusses this.

This week Donald Trump met with leaders from the historically black colleges and universities. While he was meeting with those African-American leaders, Betsy DeVos, the Secretary of Education sent out a press release praising the HBCU saying that they’re such a great example of school choice and how successful it can be in the United States. What DeVos may not realize is that these historically black colleges and universities were essentially formed, founded and gained prosperity during the era in the United States under Jim Crow segregation laws because that was the only choice that African-Americans who wanted to go to college had. They couldn’t go to regular state universities because those were for whites only. That’s not choice, Betsy. That’s oppression.

In fact, when a black woman did attempt to go to the University of Mississippi under segregation, which she made that choice, 20,000 members of the National Guard had to be deployed to the State of Mississippi. That’s not choice. Again, that’s oppression. Perhaps if Donald Trump had picked somebody to run our education policy in the United States that has higher than a fourth grade achievement level, maybe she would have understood that. This is pathetic, and it is frightening coming from the woman who is literally in charge of education in the United States.

To somehow frame these black colleges and universities as beacons of choice, she had to have known that they gave prosperity because they were the only choice that black people in the United States had to go to college or university before 1960 without getting hosed down or having dogs sicced on them or having National Guard members come in to block the frigging doors. Did she forget about that part in history? Did she forget about the part that is was wealthy white people not unlike herself that helped to push these policies because they didn’t want their well-to-do white children going to school with black children? Does she not understand that, or does she just choose to believe that that didn’t actually happen in the United States?

Segregation is an ugly part of American history, one of the ugliest. That doesn’t mean that we get to forget that it happened, or gloss over it or say, “Look how far we’ve come,” because we’re really not that far away from it at this point. Look at what’s happening with the bathroom laws throughout this country. Betsy DeVos, the woman in charge of education needs an education herself because if you’re going to continue to get out there and issue press releases about issues that you do not understand, you’re only proving everyone right when they said that you aren’t good enough to do this job. Donald Trump should be embarrassed at this point even though nothing embarrasses this man.

The entire nation is laughing at Betsy DeVos. In between laughs they’re crying for the state of American education and what this woman could do to the future of education for our children and our grandchildren.