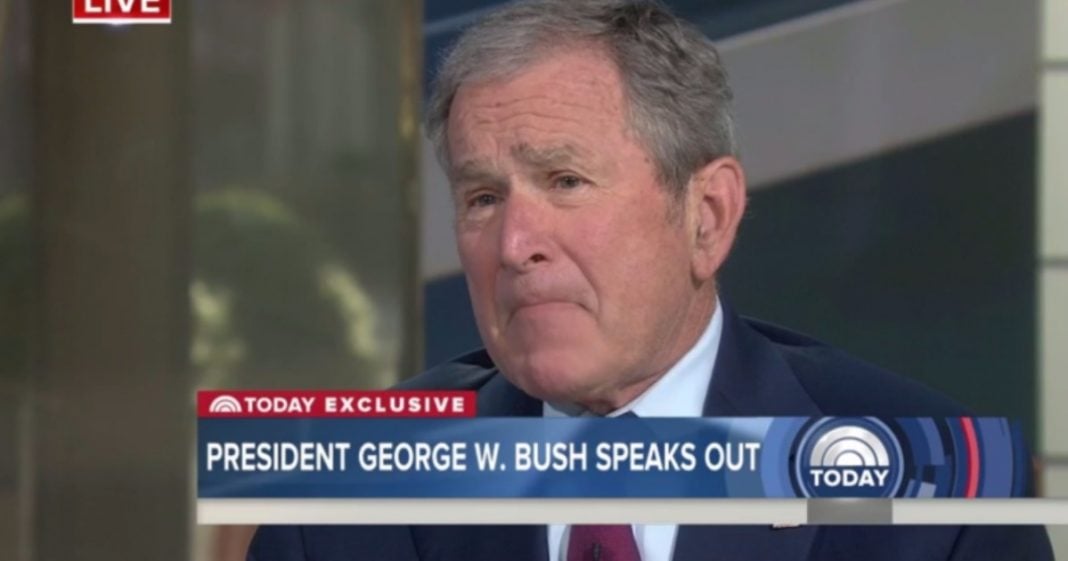 Appearing on The Today Show to promote his book of paintings dedicated to America’s veterans, Portraits of Courage, former President George W. Bush spoke with Matt Lauer about Trump’s first month in office.

Lauer asked Bush how he felt about the media, as his administration often faced sharp criticism from the press. The former President said, “I consider the media to be indispensable to democracy; that we need the media to hold people like me to account,” Bush told Matt Lauer. “I mean, power can be very addictive and it can be corrosive and it‘s important for the media to call to account people who abuse their power, whether it be here or elsewhere.”

Bush went on to say that he even tried to convince other leaders of the concept of the free press.

“One of the things I spent a lot time doing was trying to convince a person like Vladimir Putin, for example, to accept the notion of an independent press,” Bush said. “And it‘s kind of hard to, you know, tell others to have an independent, free press when we’re not willing to have one ourselves.”

The former President also said that the country deserved answers in Russia’s role in the election, but trusted those in Congress to investigate fairly.

Further driving home the stark differences between the two Republicans, Bush chastised Trump’s Muslim travel ban. Lauer quoted the 43rd President’s speech after 9/11, “I also want to speak tonight directly to Muslims throughout the world. We respect your faith.” Bush responded by saying that “the bedrock of our freedom is the right to worship freely.”

On immigration actions, Bush also differed from the current administration. Bush, who was one of the more popular Republicans among Latino voters, said that he favored “an immigration policy that is welcoming and upholds the law.” This of course stands in contrast to Trump’s Executive Orders that many see as Unconstitutional.

Meanwhile, Fox News looked for the silver-lining in Bush’s interview. Their headline: “Bush 43: I Take Trump at His Word That He Wants to Unify the Country.” No word yet from the White House on if they will declare it fake news.