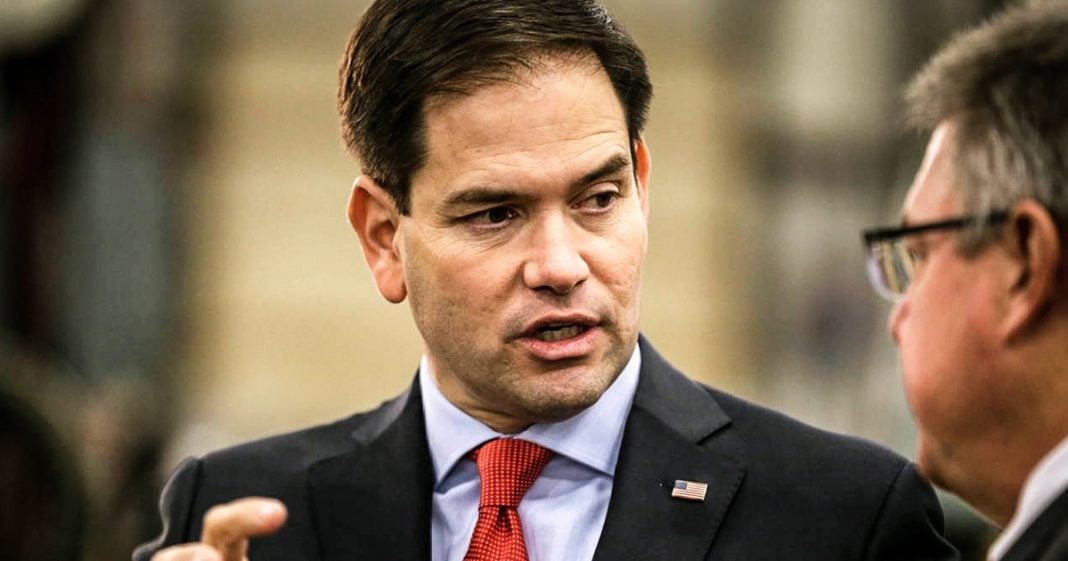 Republican Senator Marco Rubio finally explained why he’s skipping the town hall meetings that his fellow Republicans are attending across the country – he said he’s afraid of being heckled and ridiculed by his constituents.  Republican New Jersey Governor Chris Christie had the best response to people like Rubio: Welcome to the real world of adult responsibilities. Ring of Fire’s Farron Cousins discusses this.

Republican Senator, Marco Rubio, confirmed this past weekend what we have been saying for several days, and that is, that the reason he is not holding Town Hall meetings with his constituents is because he’s terrified. Rubio told a local CBS affiliate in Miami that, “The reason he is not doing these Town Halls, is because he doesn’t want to be heckled by activists.” According to Rubio, what he said in this interview was that, “You set up these Town Halls and then Liberal organizations rally 300, 400, 500, 600 Liberal activists to show up at these meetings and disrupt them, and he just simply doesn’t want to do that.”

Well, here’s the truth. First of all, yeah, there are Liberal groups working to bring people out to these Town Halls, but not to disrupt. To ask questions. Straight-up questions such as, “Why do you want to take away my healthcare coverage?” They want Republicans to be held accountable for their actions in Washington, DC. That’s all these Town Hall meetings are about. Even Republican New Jersey Governor, Chris Christie, came out and said this past weekend, “That if you don’t want to face your constituents, welcome to the real world of adult responsibility. You don’t want to be yelled at, you don’t want to be held accountable. Well, too bad. You’re a grownup, you made your bed, now you have to lie in it.”

That’s basically what Chris Christie told these Republicans this past weekend, and this is coming from a man, who could very well end up in prison by the end of the year. But, Rubio’s not alone. You also have people, like Louie Gohmert, who are refusing to hold Town Halls. In fact Gohmert said, “That the reason he doesn’t want to do it is because of what happened to Gabby Giffords in 2011, where a mass shooter showed up, killed several people, shot Giffords and the man who ended up replacing her in the House of Representatives.” Gohmert believes that if he shows up at a Town Hall, he’s going to be shot. Now I don’t think either of these men, Louis Gohmert or Marco Rubio, fully understand or even been paying attention to what actually is happening at these Town Hall meetings.

Yeah, people are getting angry, but they’re angry because your party is not answering questions. Your party cannot explain why they want to take healthcare away from millions of people. Your party cannot explain what they’re going to replace the Affordable Care Act with. Your party cannot explain why they won’t investigate Donald Trump. So, you can make all the excuses you want, as to why you won’t do a Town Hall meeting. But, the truth of the matter is, that you’re not doing it, because you’re afraid. And, if you are afraid of your constituents asking you questions, then as Bernie Sanders said, “You don’t need to be in the Senate, or the House, or anywhere in a position of power if you don’t have the courage to stand up and answer a single question from the people who put you in office.”