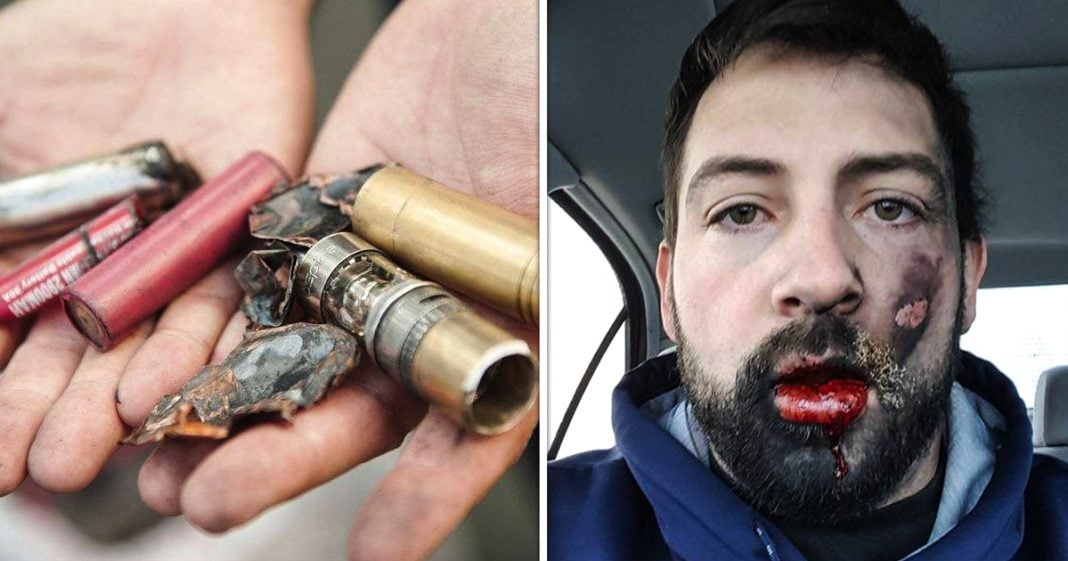 While there are currently no long-term studies available on the health effects of e-cigarettes and vaping, there are some dangers that consumers need to be aware of with these devices. Attorney Andy McGraw joins Ring of Fire’s Farron Cousins to discuss these dangers.

Farron: And I think it’s important, when we say these things explode, a lot of people think, ‘Okay, well, just like a little, just kind of crumples up or maybe just pop.’ I mean, we are talking literal, full-blown explosions that are happening sometimes right in people’s face as they have this device in their mouth. I think some of the examples we’ve seen, we’ve seen people with second and third-degree burns all over their face. We have seen people get parts of their tongue blown off, teeth blown right out of their mouth. I mean, this is a very, very serious issue. It’s not just a small explosion, like you said. These things do become rockets. There’s photographs that I’ve seen of a man who had one charging on his bathroom sink, a porcelain sink, it exploded and completely demolished that porcelain sink. It blew pieces of that all over the bedroom, so these things really do become high-powered explosives, for lack of a better term.

Andy: Yeah, and I’m glad you brought up the charging situation, because that is frequently cited as the reason for the fault in the battery, for the explosion of the battery. Frequently, these batteries are made overseas, in China, made with inferior materials, and with inferior production means, and a lot of times these aftermarket batteries are being charged in a way that affect the battery and make them explode. And while the injuries suffered by these explosions are significant, they also are linked to fires in the houses and cars, when people plug them into their computers or plug them in using the wrong kind of chargers, a lot of times these batteries will explode and start huge fires in the house, huge fires in the car, and, again, cause those kinds of injuries that you were describing, destroying teeth, breaking necks, causing chemical burns and massive burns on legs, where people frequently carried them in their pockets.

Farron: And so when we’re talking about these, the danger is with the batteries, not necessarily the device itself, but the shape of the device is what allows it essentially to become a rocket, but it’s the batteries themselves that are exploding these lithium-ion batteries, and to the charging issue, these things first came out in 2007. That’s when they were first introduced to consumers. They were patented in 2003, but in 2007, a USB charger is a lot different than a USB charger today. We’ve had USB 2.0, USB 3.0, all kinds of things since then, so they put out different wattages of power, perhaps the battery is old and cannot handle that much power, if it’s one that was produced a couple years ago, but the problem is that even if you are using this thing as directed, they don’t always specify what type of USB port, USB charger, you need to be using.

So even if you do follow the directions to the T, they may be outdated, and you may not know that, because they don’t necessarily specify it. Is that something that we’ve seen here?

Andy: Yeah, that’s exactly right, and it’s important to note that lithium-ion batteries are ubiquitous. They’re in cell phones, they’re in computers, and you have seen cases in which computer batteries have caught fire from design flaws or from problems, and there’s a big problem with the Samsung phone, with the batteries in that catching fire, but the difference between those batteries and the ones in these e-cigarettes and these vapes is the shape of the battery, the cylindrical shape, specifically, of the battery in these e-cigarettes and vapes. That causes more of that kind of explosive rocket effect, but yeah, you’re absolutely right. The USB chargers, they don’t come with very good warnings on how to use them, and specifically to not use them in other types of USB devices.

Farron: So is there anything, really, that somebody who uses one of these devices, do they need to go back, check their owner’s manual, do they need to contact the company to make sure that they’re doing this correctly, or what can people do right now, if anyone listening to this is actually using one of these devices, how can they make sure that they avoid one of these problems? Obviously, without knowing whether or not their battery is safe, because I know this isn’t happening to huge numbers of people, but it’s happening to quite a few people, and the damage is turning out to be catastrophic for somebody. So what should somebody do right now, listening to this, to make sure that they don’t have a user error that causes these battery defects?

Andy: Like you said, the big thing is to read the manual. If the e-cig or the vape comes with a particular charger, use that charger. Don’t try to plug it in through an alternate means. Don’t try to just plug it into your USB on your computer. That’s the big thing. Also, making sure that you’re using quality, higher-quality products, higher-quality batteries, and not batteries that may be made by an overseas company that may be cutting corners, maybe putting out inferior products that might be subject to these kinds of problems.

Farron: So always look for maybe something from a manufacturer that you trust, make sure you check out all the parts, because a lot of times, people will take these devices, they’ll modify them, they’ll put in different batteries that last longer, so I think the big thing, obviously, check that label, make sure you know where this battery came from, make sure it’s from somebody that you trust. Do a little research. Look up the company online. Look up your particular device manufacturer, see if they have been linked to any of these problems, because back to the injuries, you mentioned somebody had their neck broken when one of these explosions occurred?

Andy: Yeah, and before we get to that, it is important, also, to note that because these devices do tend to wear down the battery, a lot of times people carry spare batteries with them, and a lot … You’ve seen some of the videos where these batteries will explode in somebody’s pocket or a purse or a backpack, so it’s also important when you are carrying these batteries as a backup to make sure they’re carried in a special case or some kind of plastic case, something that won’t conduct the electricity, because that is one of the things that the companies are pointing to in some of these device failures. But yeah, what the explosive … I mean, it just goes to show the power and the devastating effect of what can happen when these things do explode.

Like we were saying, it can destroy parts of your tongue, it can break your teeth. The force of it can break some of the parts of your neck bones, so yeah, they don’t fail very often, but when they do, the results can be catastrophic.

Farron: Absolutely. Andy, appreciate your work on this issue. Keep it up. This is a very important issue, and I hope anyone out there listening or watching this online, I hope you understand the dangers of this, and if you are using one of these devices, if it feels like it’s heating up, you need to dispose of it, put it in an area where there are no people, but you got to do that immediately, because once these chemical reactions begin in the battery, according to the reports, there is no stopping it. Andy, thank you for talking with us today.

Andy: Farron, thanks for having me on.