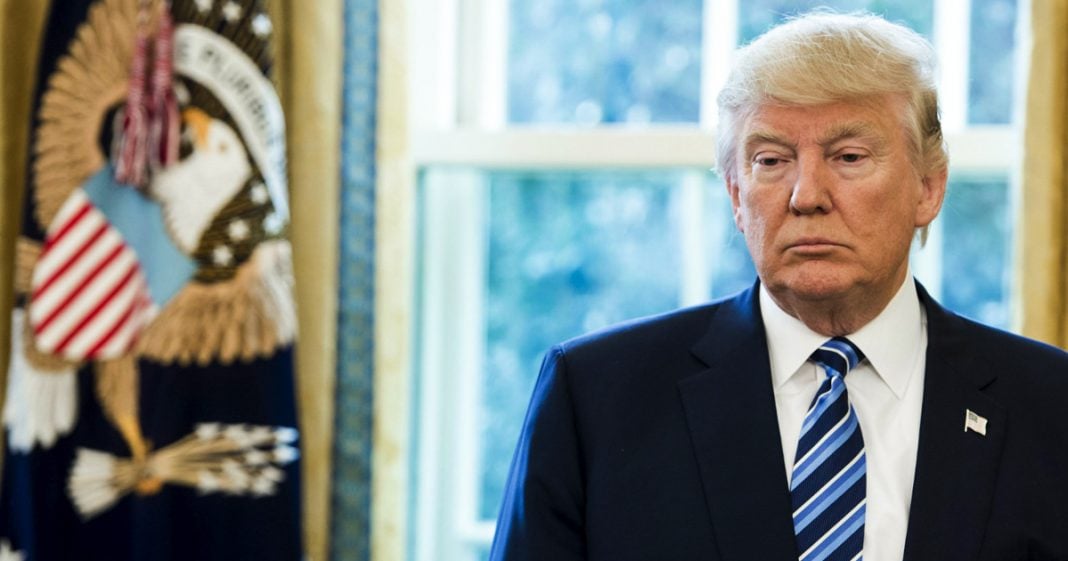 One of the biggest problems that Donald Trump is facing with his executive orders is that he really has no idea what he’s doing. He doesn’t understand the law, he doesn’t know the law, and so he’s bound to overstep his authority when the opportunity arises. But that’s what happens when you elect a businessman instead of a politician. Ian Millhiser, editor of Think Progress Justice, joins Ring of Fire’s Farron Cousins to talk about why this is a huge problem for the United States.

Farron: Ian, I want to start by reading a paragraph from a recent article you wrote on February 10th on ThinkProgress. It says this, “What happens when the President of the United States is a short-fingered reality show host with little interest in informing himself? What if we have a President who’s spending his intelligence briefings tweeting about his daughter’s clothing line? What if his policies are rooted less in real concerns about national security and more in a desire to punish people of certain faiths?” I have obviously read a lot of stuff about Donald Trump in the month and a half, two months since he’s been inaugurated, and I think that one paragraph probably sums up everything about Donald Trump as perfectly as anything I’ve ever read about the man. It just was, it was perfect. That is exactly what we’re looking at today with President Donald Trump, a man who has no desire to educate himself about national security issues, domestic policy, foreign policy, anything of that nature. He’s just in it for himself, in it to make some money, and to get retribution against anyone who dare speak out against him. I really think that that’s what we have right now sitting in the White House, if he’s not back at Mar-a-Lago at the moment.

Ian: No, I mean, I appreciate that you picked out that paragraph, because it captures not just a moral problem that I think the nation is dealing with right now, but a legal problem that the nation is dealing with. Which is that, the whole premise of our system of government is that we don’t have people in charge who don’t know what they’re doing and don’t care to know what we’re doing. That’s not just like something that’s implicit in the office of the presidency, but they’re all kinds of laws which start with words like, “Whenever the President determines.” The President has a tremendous amount of power to declare something to be true and then when that happens there’s a slew of legal consequences that follow. We have trusted presidents with that, because in the past we haven’t had presidents who are this uniquely uninformed. Certainly, there have been presidents that I have disagreed with and I think there have been plenty of presidents who have done a bad job, but you didn’t have … George W. Bush attended his intelligence briefings. I had faith that the people who worked for him were knowledgeable about their subject matter. With this president, it’s not so clear that that’s the case.

Farron: What is interesting, he ran on this, ‘I’m the outsider. I’ve never … I haven’t spent a day in Washington. Never been an elected official,’ and for some reason people thought that that was a good thing.

Farron: Because look, I haven’t done any of those things either. Should I be president? Oh dear God, no.

Farron: I would be awful. I wouldn’t be as hateful as him, obviously, but it’s the same concept. You don’t pick Joe Schmo off the street who knows nothing about anything and make him President of the United States, because we’re already seeing this particularly with the Muslim ban. He is overstepping this office, his power, left and right, and now the courts are having to keep him in check. ‘Hey, let’s just launch a war on the courts,’ is his new thing with this.

Ian: Yeah. I mean, the thing that strikes me about it, is the presidency may be the only job where people think this way. Where people think that, ‘Oh, if we bring in someone who’s got completely bizarre ideas, who has no experience, somehow that will be good.’ I had a leaky faucet a few months ago and I took the thing apart. I couldn’t figure out what was wrong with it and when I was trying to figure out how I fix it I didn’t say, I want some maverick plumber who doesn’t think like all the other plumbers and is going to bring some new thinking to my particular plumbing. No, I hired an experienced plumber. I hired someone who knew what they were doing. When I get sick I don’t say, I want a maverick doctor. I go to a doctor who has a reputation for practicing medicine in a conventional way and I think is going to do a good job of it.

I mean, that’s how we think about people doing their job. You gain experience, you learn what you’re doing, and as you grow in your profession we give you more responsibility. I don’t understand why people don’t realize that politics operates the same way. There are skills to be mastered in terms of knowing how policy is designed, knowing how the bureaucracy works, knowing how to wield the levers of power in our constitutional system, knowing which ideas have been tried in the past and failed. If you don’t have that base of knowledge, then it’s like hiring the maverick plumber, picking the guy who thinks that he can twist your copper pipes around with his hands and maybe that will be a good thing. You wouldn’t hire anyone else with that kind of thinking. Why would you hire a president with that kind of thinking?

Farron: Well, and to extend that and this is probably going to make some people angry here, but to be honest, that was a similar argument against Jill Stein. Sorry if I offend people there with that, but Jill Stein also, I think she had a little bit of experience on some kind of city council type thing at one point, but she also did not have this political experience.

Farron: I know at this time with people clamoring for the outsiders, they don’t mean somebody who doesn’t understand the job. They just … I assume they mean somebody who can still think on their own, somebody who understands the problems of the public, and Trump is not that guy. He is not that candidate, he is certainly proving himself to not be that president, because he just fundamentally does not understand the power of this position, what he is allowed to do and what he’s not allowed to do. Unfortunately, right now we have a republican party that is so hellbent on sticking to party lines, rather than paying attention to the damage Trump is doing that they’re not speaking up against him.

Farron: People want to give John McCain credit, but look at his record. He is still supporting what Trump does, he just occasionally likes to go out in the media and say, ‘Oh, this is nutso. Why are we listening to this guy? Excuse me, I have to go vote and confirm all of his nominees.’

Farron: Don’t give John McCain credit for anything. I’m sorry, but this whole Republican Party they’ve essentially become the enablers of Donald Trump at this point.

Ian: Right. Well, the problem is we don’t have a conservative party anymore. We have the democrats, which are a fairly standard center left party and then we have a radical party. It used to be the case … What conservatism means. One of the more sensible principles of conservatism, a principle that I happen to agree with, is that when you take everyone who is considered a problem and a consensus forms. You bring in people who lean to the left and they look at the problem, they see it one way. You bring people in who lean to the right and they see it in a very similar way. Certain ideas are considered off the table, because there’s a consensus that is formed that these are bad ideas. Sometimes the consensus is wrong, but most of the time you disturb that consensus at your peril.

Most of the time if different smart people acting in good faith have all looked at something and concluded like, ‘Hey, you can’t do that.’ Chances are they’re on to something. The problem that you have right now is that the Republican Party that we have is no longer functioning as a conservative party. It’s no longer saying, ‘Forget about Trump.’ It’s no longer saying things like, ‘Hey, threatening to tank our economy by putting us over the debt ceiling, unless they get what they want, is an off-the-wall … It’s not a viable option.’ They’re no longer saying, ‘You can’t hold a Supreme Court seat open for a year or more.’ They’re all of these tactics that would have been considered ridiculous by everyone. There was a consensus view until very, very recently, and I don’t really think that Trump is out of the norm within the Republican Party. I mean, what makes Trump different is that he doesn’t hide it.

Ian: He says the part that’s supposed to be silent, he says it very loudly, but once … When you become a radical faction, the notion is that … If your premise is, ‘We’re going to kick over a bunch of premises that everyone thought were true,’ you’re making yourself vulnerable to someone like Trump and you’re also not going to be the sort of political faction that’s going to stand up to someone like Trump.