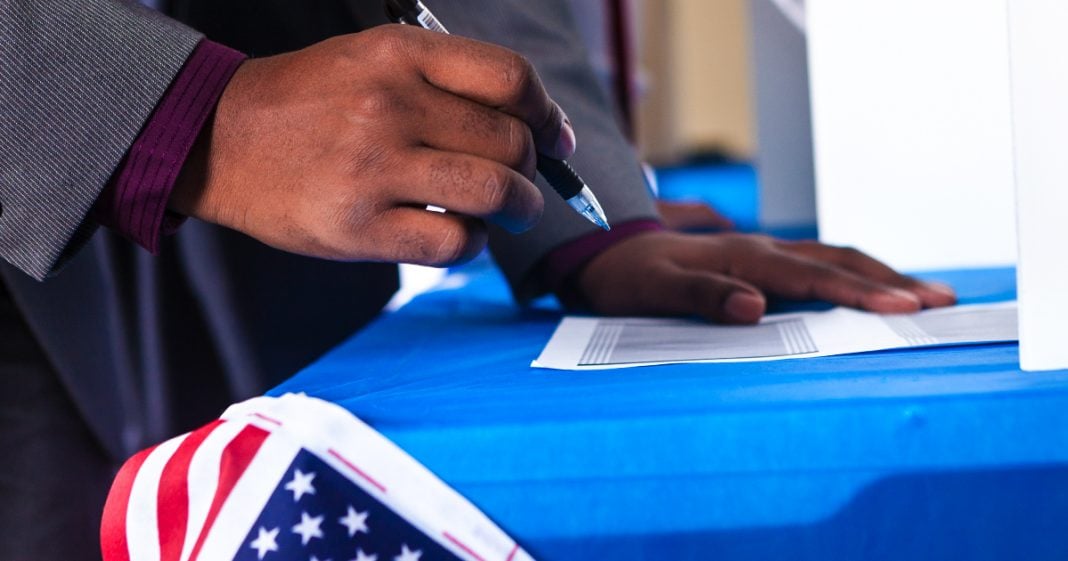 Donald Trump has talked nonstop in recent weeks about the alleged 3 to 5 million illegal voters that participated in the 2016 general election. He’s provided absolutely no evidence, but that hasn’t stopped Republicans from working on new, restrictive voting laws. Kira Lerner of ThinkProgress joins Ring of Fire’s Farron Cousins to discuss what’s happening.

Farron: Kira, last week we had secretaries of state from all over the country meet in Washington DC. One of the things that you talk about in your article on ThinkProgress that they could’ve done was officially denounce, officially say it’s not true, Donald Trump’s lie that 3 to 5 million illegal voters helped to swing the popular vote towards Hillary Clinton. They failed to do that. They wouldn’t stand up and say that, ‘No, this isn’t true.’ To me, that is absolutely remarkable that they would not publicly come out and say this.

Kira: Yeah, that’s correct. The fact of the matter is that sadly in our country voting and the right to vote has become a political issue. We saw that last week at the National Association of Secretaries of State’s annual convention. It’s the one time of year that almost all 50 election chiefs from all 50 states are together in one room to discuss and plan and think about how to run elections better in the future. At one point during the convention Alex Padilla, who is the secretary of state from California, introduced a resolution which would in effect publicly denounce Trump’s claim that 3 to 5 million people cast illegal ballots. It’s something that he and most of the other democratic secretaries of states said that they should all use their platform to tell the American public that, listen, these claims are false and they’re dangerous and they’re going to lead to restrictive voting laws.

Unfortunately because the majority of the secretaries of state in this country right now are republicans they blocked his effort to even introduce that resolution. There was no chance for the election chiefs to even vote to pass that resolution.

Farron: It’s really kind of disgusting, I guess is the word I would use. When you look at what’s happening right now in the United States, especially in this issue of voting, republicans are so beholden to party lines, beholden to this commander in chief that just happens to be a member of their party because it was politically expedient for him to be that way. They will not stand up to him even on something that is so verifiably demonstrably false. From what we’ve seen so far there is no evidence that would even suggest anything close to Trump’s claim of 3 to 5 million illegal people voting. I mean is that correct?

Kira: Exactly. Donald Trump is no expert on voting. He doesn’t claim to know this issue very well. He’s just propagating this lie from the White House. These 50 secretaries of states are experts and this is what they work on day in and day out. The fact that the republicans are kind of bowing over and saying, ‘Listen, this is our president. We have to listen to what he says,’ even when the facts in each state show that the number cannot be anywhere near the 3 to 5 million claim that he makes is pretty revealing.

Farron: Alabama’s republican, obviously secretary of state, he kind of agrees with Donald Trump. He believes that we had these illegal voters. He said that that’s what gave Hillary Clinton the state of New Hampshire. How exactly? This is part of the story I don’t quite understand in the minds of these republicans. How does this voting scam work? Where do these illegal voters come from in the state of New Hampshire in large enough numbers to hand the state to Hillary Clinton? I get that they’re out there lying about it. I just don’t understand logistically how you could even pull off such a massive scam in the United States.

Kira: The fact of the matter is that you definitely could not and if people were attempting to do something on that scale we would know about it. If not, the general public, these secretaries of states, no doubt, would know about it. When I asked Alabama’s secretary of state, John Merrill, about voter fraud and why he thinks it’s so necessary to pass restrictive laws like voter ID laws in order to prevent this so-called problem, he told me that in his state of Alabama he’s only identified 304 potential cases of fraud since he took office in 2015. An even smaller number of those ended with convictions. He and other republican secretaries of state like to push this line that if we know about this number who knows how many more there could be.

Farron: It’s interesting too because Jeff Sessions during his time as Alabama secretary of state, I believe he was secretary of state, but he pursued voter fraud charges well over 100 cases. Again, I forget the exact number, but not a single conviction out of any one of those cases that Jeff Sessions in Alabama had come after. This obviously is not something new. It’s something the republicans have been trying to make a case for for decades now. There’s still just as little evidence today as there was back in the 1980s.

Farron: 304 potential cases in Alabama. A few convictions here and there. Like you said, because we know that it happened in small numbers who’s to say that it didn’t happen in larger numbers? That’s the kind of logic we’re dealing with here.

Kira: I spoke to New Hampshire’s secretary of state who is actually a democrat. I was a little bit surprised by the response he gave me. I presented him with what all of these other elections officials were saying occurred in his state. The claims from the White House and from Alabama’s John Merrill, that thousands of people were bused into New Hampshire and cast illegal votes. Instead of using his position to vocally and loudly denounce that claim and to say, ‘Listen, in New Hampshire we ran a free and fair election,’ he told me that he welcomes investigators to come into New Hampshire and to see if there’s any basis to this narrative of bussing and false votes.

He actually told me, his direct quote was, “People say that if you get picked up for a DWI you’ve probably done it at least 10 times, maybe more.” He was telling me that if you’ve seen a few cases of voter fraud he doesn’t really know how many cases might exist. He has not way to quantify it.

Farron: Again, I still have to wonder suppose … Let me put my mind in the brain head of a republican. Suppose this is true. We had this massive conspiracy in the United States. People paid for buses. They picked out individuals from other states to get on these buses, drive these buses to New Hampshire and make sure that all of these people, I guess somehow had a name that matched someone else in the state of New Hampshire to go in and vote for Hillary Clinton?

I spoke to Ellen Weintraub who’s a commissioner at the FEC right now, this morning. She told me that if these buses were being used to send in voters from Massachusetts and other nearby states someone has to be paying for it. She would’ve had to see receipts and that never happened.

Farron: As republicans say, it was obviously George Soros, probably, most likely. He’s paying all these protestors. My god, that man has to be writing a hundred thousand checks a day just to keep up with it at this point.