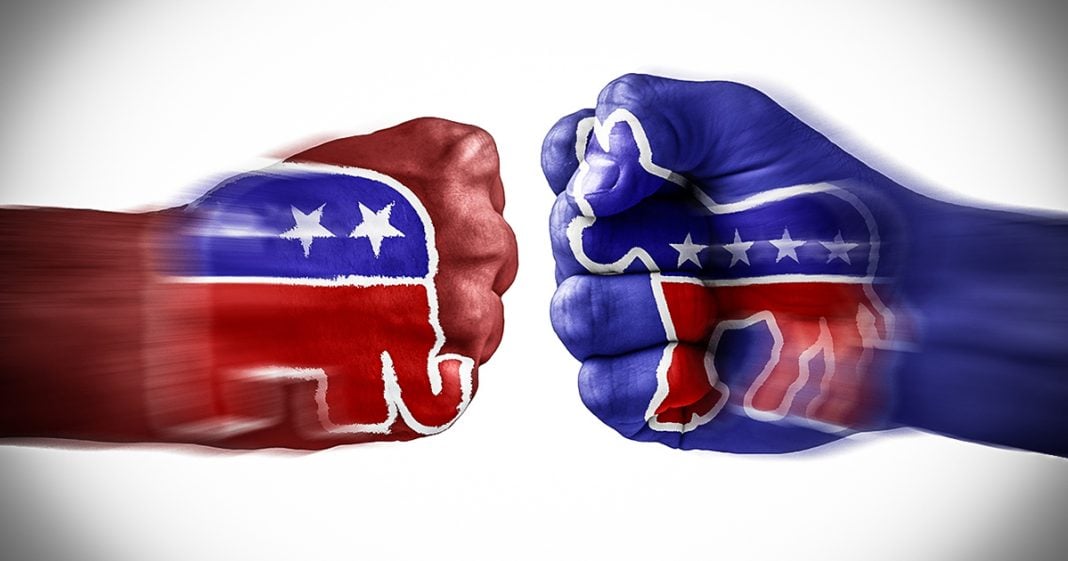 While angry voters are busy confronting Republican leaders and fighting to protect their rights and benefits, spineless Democrats online are warning that we need to be more civil, we need to be polite, and for goodness sakes we need to stop yelling!  These people lack the courage to be effective, and they are completely wrong in their approach.  What we’re doing is working, and it’s going to keep intensifying. Ring of Fire’s Farron Cousins discusses this.

There are a lot of voters in the United States right now, mostly Democrats, Liberals, Independents, who are pretty pissed off at the fact that Republicans are trialing to repeal the Affordable Care Act, they’re refusing to investigate Donald Trump, they’re refusing to ask for his tax returns, and that’s why these people are showing up at town hall meetings and demanding answers from Republican politicians, the Republican politicians who represent them in either the house or the senate. Now, this anger is justifiable, it’s understandable, and it’s necessary, but don’t tell that to the spineless Liberals.

We have too many Democrats in this country right now, not necessarily elected one, but prominent ones, writers, people on Twitter with 40-50,000 followers, telling us to calm down. “Just calm down. Go to these town halls, ask your questions, but for gosh darn sakes, don’t yell. It undermines your position and it just makes you look bad and gives Republicans all the power.” Bullshit. When you think back at how the Tea Party founded, obviously had a shitload of money from the Koch brothers but they were angry, they were angry about things that didn’t exist but they were angry. They showed up at those Affordable Care Act town halls with their representatives, one person bit a man’s finger off, and how did voters reward the Tea Party? They won. They won the election.

Now, I am absolutely not advocating any form of violence. Don’t go biting people’s fingers off, but stand your ground and don’t listen to these weak ass Liberals who tell you that you don’t need to be yelling, or that you shouldn’t be so angry, or that it didn’t work for the Tea Party, because it did. They won in 2010, they won in 2012, they won in 2014, they won in 2016. Don’t tell me it didn’t work for them. Anger is what we need right now, and if you don’t think that that’s what we need, then I suggest you keep your mouth shut, get off Twitter, stop writing articles and go away for a few years, because you’re doing more harm to the Democratic Party and to this country than the Republicans could ever hope to.

Anger is necessary and it’s justifiable, and don’t you dare tell anyone how to feel. When they have members of their family who could die because of what the Republicans are doing and you have the audacity to tell them to stop yelling. Don’t you dare tell anyone how they should feel or how they should act when they’re dealing with family members who are teetering on life or death, based on what the Republican Party in Washington decides to do with the Affordable Care Act. That’s not your place to do that.