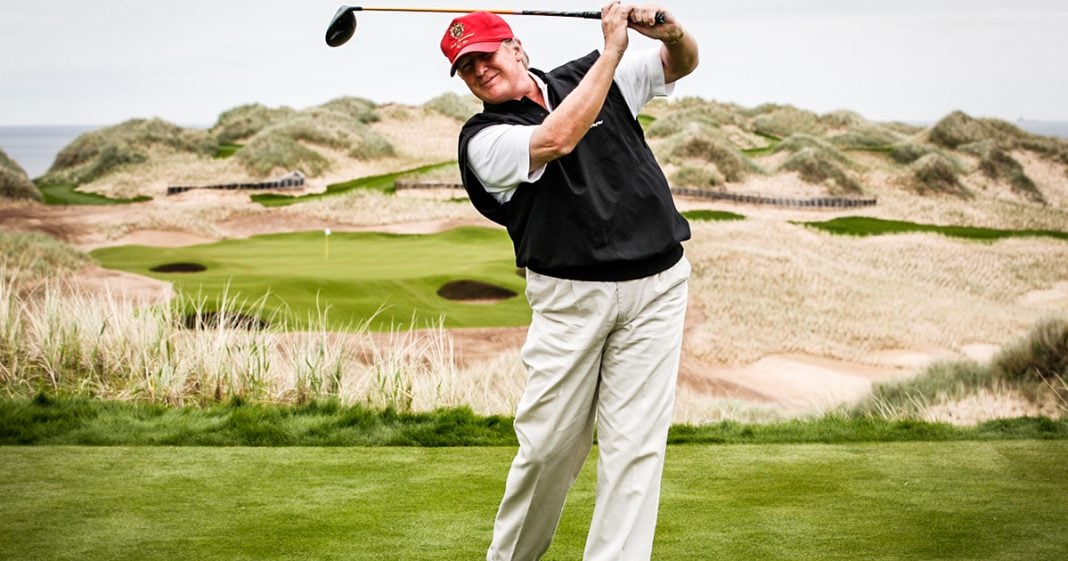 Donald Trump has made it clear that he doesn’t have much respect for intelligence agencies. But these agencies are tasked with protecting us, and they need to be listened to. Instead, Trump has spent half of his presidency so far on “non-work days” and he’s spent more time golfing than at intelligence briefings. Ring of Fire’s Farron Cousins discusses this.

According to an article in Elle magazine as of Thursday, February 23rd, Donald Trump had spent 744 hours as the president of the United States. Of that time, he has spent 25 hours golfing. He’s spent 25% of his time in the state of Florida at his Mar-a-Lago resort. He’s spent 13 hours tweeting, but here’s where things get a little screwy here. He has spent more time golfing as president of the United States in the last month than he has examining intelligence briefings, or receiving intelligence briefings, or meeting with members of the intelligence community. Now I know that right now there is a big fight going on between the intelligence communities and Donald Trump, mostly started because Donald Trump himself did nothing but call the agencies incompetent and useless during his campaign, so yeah, that’s probably going to piss a few people off, especially when you continue to do things that are seen as less than legal. They’re going to leak it to the press because you laid the foundations for a hostile relationship between the intelligence communities.

All of that aside, you have to pay more attention to your intelligence briefings. In case you haven’t noticed, things around the globe not going so well in a lot of places. Okay? Syria, Yemen. Why don’t you pay attention to these things before they become a problem for us here in the United States? Don’t enact some ass-backwards Muslim ban thinking that’s going to solve it. Pay attention. Understand what’s happening around the world and why it’s happening. Here’s a great thing you could do. Start to understand the science behind climate change, because that’s driving a lot of conflicts in the Middle East and it’s driving a lot of recruitment for ISIL, but you continue to deny that this even exists. Is that why you had to put up that massive sea wall around your golf course over in Scotland because of rising sea levels? You just think that’s a fluke? It’s okay to protect your shit, but just let everybody else flood? That’s what you think about climate change?

More time has been spent by this man on a golf course than actually doing his job. 399 hours out of that 744 has been spent on what the White House considers non-work time, which means for the majority of Donald Trump’s presidency, he has mentally checked out. He’s on vacation. Don’t talk to me. Don’t mess with me. Don’t do anything. I’m on vacation. I don’t know of any company in this country that would allow an employee who’s been there for less than a month or right at a month to already have taken two weeks’ vacation. You’d probably be fired if you even asked. You would fire people from your businesses if they did that, Donald, and that’s what you expect the American people to just accept about your presidency, that you’re going to spend half the time on vacation?

You’ve already cost us more in vacation time this year than Barack Obama cost us in a full year. In one month you did that. This is a man who clearly does not want to be president of the United States. If he did, he’d be working. If he did, he’d be attending intelligence briefings. If he did, he wouldn’t be spending all his time on the golf course. Donald, if you want to retire and just go live a leisurely lifestyle with all your money, I don’t think anybody’s going to complain. We would welcome it at this point, because we need somebody in that White House that not only understands their job, but somebody who’s actually willing to do it.