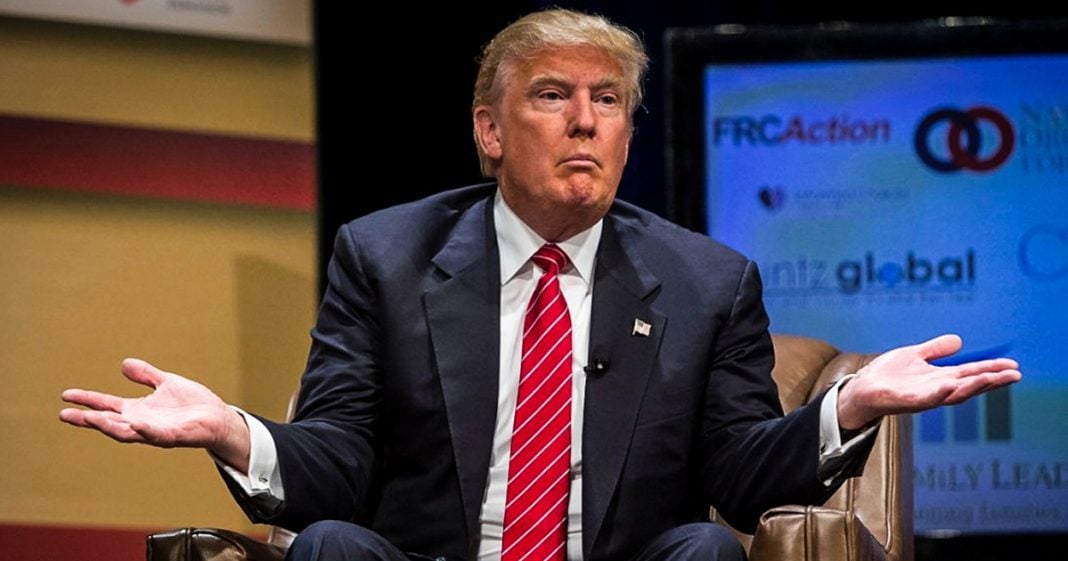 A new poll shows that 60% of the American public believes that Donald Trump doesn’t understand his job as a president and the complexities of this position.  And that’s absolutely right – if you look at the things that he said both during and after his campaign, you really get the sense that he doesn’t understand how this job actually works. Ring of Fire’s Farron Cousins discusses this.

According to a new poll reported by CBS News, six out of every 10 Americans do not believe that Donald Trump understands his job as President of the United States. They do not believe that he understands the complexities involved in this job, or the responsibilities that go along with being the President of the United States. 60% of this country doesn’t think that Donald Trump has any idea what he’s doing, and they’re absolutely right, but again, this is something Donald Trump warned us about. When he campaigned and said, “We have a problem with illegal immigration. Let’s build a wall,” not exactly a well-thought out plan. Not exactly something that’s feasible or affordable, but he just said it. During a meeting with intelligence officials, he asked three separate times, “Why can’t we just nuke them?” When talking about enemies to the United States. That is a scorched earth approach to anything, because he doesn’t understand the fine-tuned operations that the US military is capable of doing, capable of pulling off.

But that’s the problem. Donald Trump came into office as a man who had never spent a single day of his life in American politics as an elected representative of the people, and suddenly he gets thrust into the most powerful position on the planet, knowing absolutely nothing. He knows nothing about the law. He knows nothing about how to draft a law. That’s why he’s got people like Steve Bannon and Stephen Miller drafting these executive orders, and apparently, according to Trump himself, he’s not even really reading them. That’s how Steve Bannon ended up on the National Security Council, because Donald Trump didn’t quite read that executive order thoroughly enough, and Bannon just slipped that in there.

This is a problem. We have a know-nothing president. He does not understand his job. He doesn’t know what he’s doing, and from all we can tell, he doesn’t even necessarily like this position. He just wanted the power, but he forgot that with that comes a hell of a lot of responsibility that he is not prepared to assume. He’s been in office for a little over a month now, and he still has not gone a week without some sort of massive screw up coming out of this administration. Just this morning, he Tweets out that we’ve got to find the leakers in the FBI. “Find them now.” Okay, well isn’t that your job? Don’t you have people for that? Aren’t there departments within the government to take care of this? What the hell are the people on Twitter supposed to do about it? Why would you even say that?

Yeah, it makes perfect sense that 60% of the American public believes that you don’t know what the hell you’re doing. Get off Twitter for five seconds and go do your damn job, okay? Stop Tweeting out things that you want to do, and go do them. Actually, don’t go do them, because you’re trying to destroy everything that we hold dear about this country, but you get the point. Don’t take your case to Twitter. If you want to find leakers, use the tools at your disposal. I am sure President Obama explained those to you. I am sure if he didn’t, that you can ask somebody in the Senate or the House of Representatives how in the hell the government works.

To be honest, that would probably be your best route at this point. Go talk to somebody who has been in politics for a while. Figure something out. Talk to somebody smarter than you, because yes, Donald Trump, most people in Washington DC, even the civilians, probably smarter than you. But that’s why the American public has lost faith in you. They’ve seen what you’ve done in just one month, and they don’t like it, but more importantly, they don’t like you, and they don’t trust you.