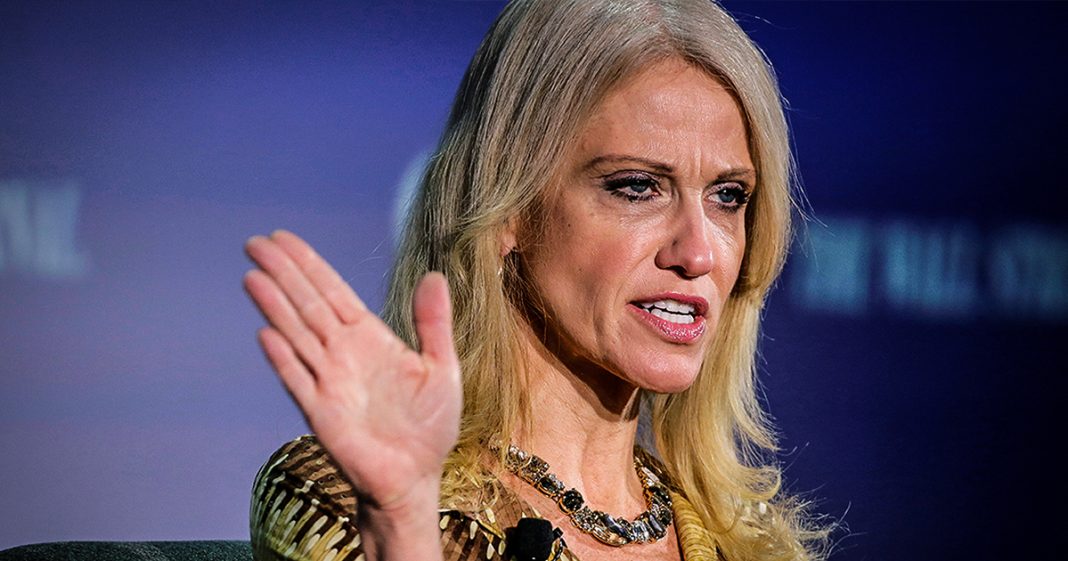 After being pulled from television appearances for a week, Kellyanne Conway is once again gracing the media with her unique brand of propaganda.

Along with returning to Trump-friendly programs on Fox News, the White House spokesperson served as the opening speaker at the Conservative Political Action Conference (CPAC) on Thursday, saying that she grew up in a household where, “[n]obody ever had a single political conversation.” Perhaps that explains many of her missteps speaking on behalf of the highest political office in the world.

In her remarks, she also stuck with a narrative she promoted Wednesday night while appearing on Hannity. Conway says that she simply took time away from TV appearances to spend more time with her kids. Speaking glowingly about President Trump, she said she “work[s] work for a man in the White House where that work life balance is welcome.”

But this week wasn’t all sunshine and rainbows for Conway. A group of 15 prominent law professors filed a misconduct complaint against Conway to the Office of Disciplinary Council for the D.C. Bar. Conway graduated from George Washington University Law School and was admitted to the D.C. bar in 1995.

In their complaint, the professors call for Conway to be sanctioned for “conduct involving dishonesty, fraud, deceit, or misrepresentation.” The letter says that Conway’s role in public office should be held to a higher standard that typical lawyers.

“Lawyers holding public office assume legal responsibilities going beyond those of other citizens. A lawyer’s abuse of public office can suggest an inability to fulfill the professional role of lawyers.”

The complaint goes on to detail some of Conway’s more notable misrepresentations in the media, such as:

The letter concludes by saying Conway’s behavior “brings shame upon the legal profession.” While disciplinary action could carry action as serious as disbarment, it is unlikely that Conway will feel any real consequences from the complaint. While she is still listed as a member of the D.C. Bar, she is inactive and does not pay dues. Additionally, Wallace “Gene” Shipp Jr., of the D.C. Disciplinary Counsel told the Washington Post that of the approximately 1,500 complaints his office receives each year, only 400-500 of them are investigated.

While the misconduct complaint may not lead to punitive actions, it does put a more serious light on Conway’s resistance to issuing truthful statements. The media loves that Conway is a constant source of comedic material, but she is also a powerful and dangerous accomplice in Donald Trump’s efforts to subvert the public’s hold on reality.