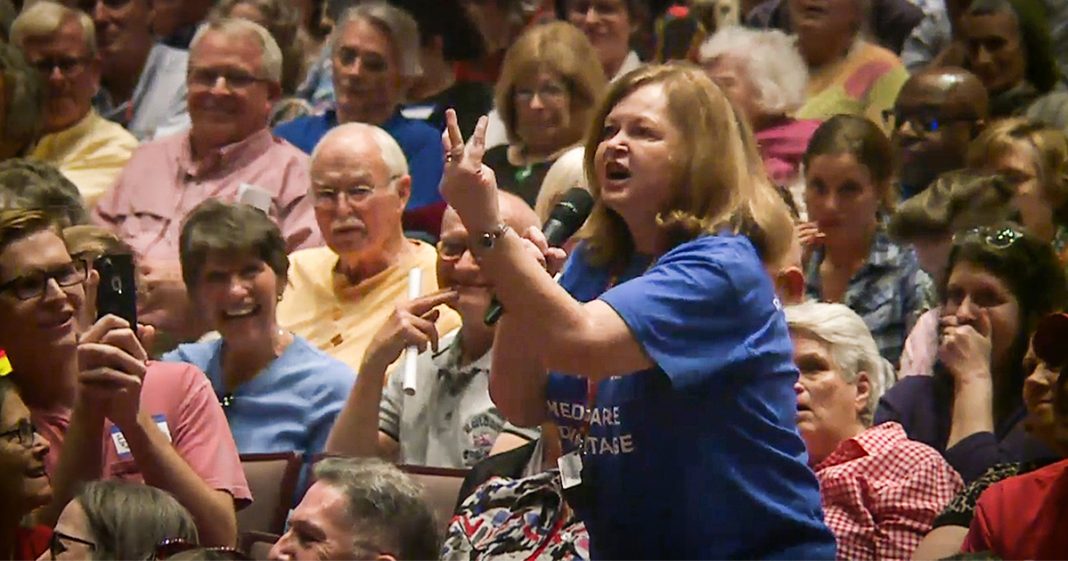 Tom Cotton is one of many Republicans who want to destroy the Affordable Care Act. And like many other Republicans, he decided to hold a town hall event in Arkansas to address the concerns of his constituents. But he never could have prepared himself for the anger that the crowd showed over the Republican plan to strip away health insurance, and one woman in particular stole the show by telling the story of her dying husband and asked Cotton what kind of insurance HE has. Ring of Fire’s Farron Cousins discusses this.

Republican Senator Tom Cotton, whom you might remember as the guy who committed borderline treason when he talked to Iranian officials and told them not to sign the Iran deal, either way he decided to do like other Republicans have done and he held a town hall meeting in Arkansas this week to discuss issues including his desire to repeal the Affordable Care Act and take health insurance coverage away from 20 to 30 million American citizens. And just like every other Republican who’s done this, Tom Cotton got a hell of a lot more than he bargained for.

In addition to one child standing up and saying, “Please don’t away PBS to pay for your stupid border wall,” and chants of, “Where are Trump’s tax returns?” the real person who stole that show was a woman who stood up and told Tom Cotton about her dying husband who otherwise could not have health insurance without the Affordable Care Act, herself included, and several other people in her family would not have health insurance were it not for the ACA. They would be dead as this woman said if not for the ACA. Take a look at what this woman did during this town hall meeting.

“I am with the Better Medicare Alliance group over all United States of America. I’m an ambassador, and I’m angry. We have an office in Washington, DC, if you’d like to go visit us. I have a ‘yes’ or ‘no’ question for you. I could tell you three members of my family including me that would be dead, dead, and homeless if it was not for ACA. I am an angry constituent. You work for us, not the other way around. We apologize for you. Now, to my ‘yes’ or ‘no’ question. I could tell you since 1991 our health insurance woes, and I’m not going to do that. My husband with dementia, Alzheimer’s plus multiple, multiple other things and you want to [spend 00:02:40] there with him at home expect us to be calm, cool, and collected. Well, what kind of insurance do you have?”

To be honest, not much more needs to be said about this. She did exactly what she should have done. She stood up, she made her case passionately, respectfully, and she asked Tom Cotton, “What kind of health insurance do you have?” Here’s the thing. If you continue watching that clip, he doesn’t answer. He doesn’t answer that. He doesn’t answer the woman’s request to meet with him. He says, “I’ve got staff. Maybe they can set something up.” Republicans right now are running scared because people are angry, rightfully so.

If we take a cue from what this brave women did at this meeting, this is what needs to happen at every single town hall, at every single rally, at every single campaign stop of any Republican or Democrat that wants to repeal the Affordable Care Act. They need to understand that this action has real-world consequences. We know that the Koch brothers want it repealed. We know that the wealthy elite want it repealed because they want those tax breaks. But sometimes, occasionally, you got to go with the people. That’s what they’re trying to say: “We know you rule for the Kochs, we know you rule for the 1%, but for the love of God, on this one issue, show a little humanity.” That’s what that woman was trying to get Senator Tom Cotton to understand. I don’t think he did. I don’t think he got the message. I don’t think he comprehends it, but if we keep it up, eventually it’s going to get through their heads.