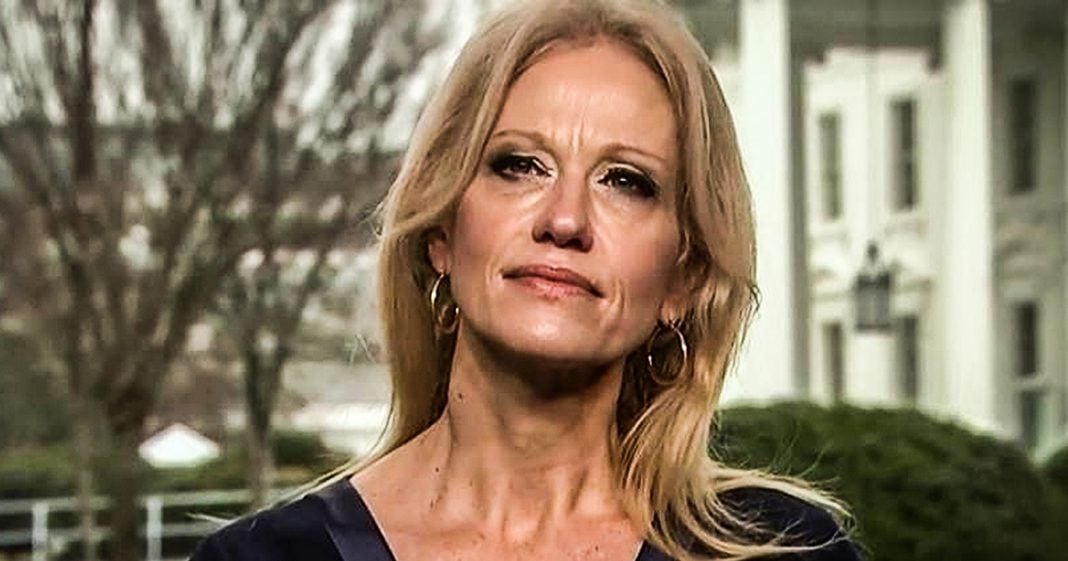 After a string of disastrous appearances, the White House has told adviser Kellyanne Conway that she’s done appearing on national television to speak for the White House.  Could her dismissal from the administration be far behind?  After all, what’s the point of being a spokesperson if you aren’t allowed to speak? Ring of Fire’s Farron Cousins discusses this.

About a week ago, White House advisor Kellyanne Conway told us all that she was going to back off her media appearances, she was going to reduce them. She just wasn’t going to be on TV as much because she really wanted to kind of concentrate on what actually is going on in the White House. Well as it turns out, according to a new report from CNN, it was actually the White House that made the decision to stop sending Kellyanne Conway onto news programs. Two separate sources according to CNN have come forward and said that the White House decided to yank Kellyanne Conway off the air because they simply cannot trust her to stay on message. Essentially, she’s too much of a liability for the administration at this point so they do not want her going on television, spewing out this word diarrhea and making headaches for the administration. And they have admitted that in the past week since she has not been on the media as much, it’s been a much better week for them. Fewer gaffes to deal with, much fewer headaches, all around good week for the Trump administration because Kellyanne Conway wasn’t on the air.

Now that’s coming from the Trump administration itself, obviously they’re not having such a great week. They haven’t had a good week since they took office. What is interesting here is that you have a spokesperson, they call her an advisor, but she’s really just a spokesperson for the administration, that’s no longer allowed to go out and speak on behalf of the administration. So what exactly is her role? I know Donald Trump doesn’t look to her as some kind of beacon of intelligence that’s going to give him sound advice on any issue of the day. Why are they even keeping her around at this point? My guess is that Kellyanne Conway’s days at the White House are probably already numbered. If they cannot trust her to stay on message, if she is not someone that this administration can control completely, like they did with Stephen Miller, she’s out the door.

Here’s an interesting contrast: when Stephen Miller went on This Week with George Stephanopoulos about a week and a half ago on Sunday morning, he was reading from a teleprompter. Which means that he was given talking points by the administration. Somebody, maybe Miller himself, wrote them out, put them on a teleprompter so that they made damn sure he stayed on message. That’s not something they can do with Kellyanne Conway, or at least not something that they’ve tried. This woman goes off the rails about everything, [inaudible 00:02:44] facts, the Bowling Green massacre. You name it, she’ll say it, and it won’t be true.

They should have known this going in. Kellyanne Conway has always been somebody who’s been known to embellish or stretch the truth, basically just a liar. At this point a massive liability for the Trump administration and that is why, unfortunately, we’re probably not going to see her smiling face gracing the Sunday shows once again.