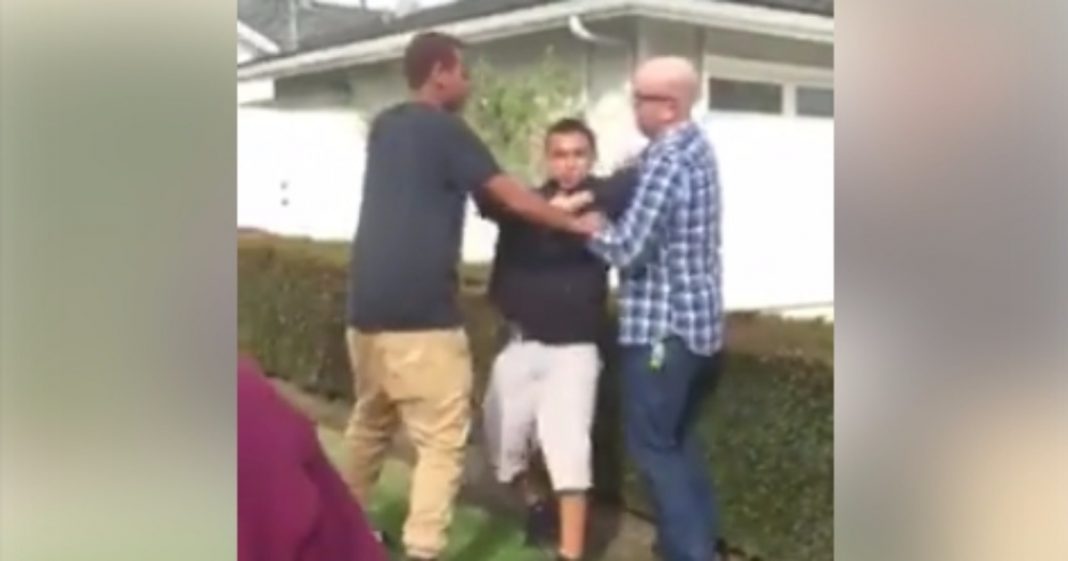 An off-duty L.A. police officer discharged his firearm during a disagreement with young teens in his neighborhood on Tuesday, and rather than being arrested for endangering the lives of these young people, police have arrested two of the unarmed teens and left the officer well enough alone.

In response, hundreds of protesters have gathered near the home of the officer in Anaheim, calling for police to arrest the man for child abuse related to the incident. “Dont shoot the kids,” the chanted, “arrest violent cops.”

The LAPD has refused to identify the off-duty officer, but did confirm that he is employed by the Police Department.

From two videos posted online, it appears that the white officer grabbed a Latino teen, 13, in response to the group of teens walking on his lawn. In the video, the teens say that the man called one of the female teens a “freaking c*nt.” The officer denies this accusation, but continues to hold one of the teens by the collar of his shirt, yanking him around.

One of the teens then grabs the man’s backpack in an attempt to make him let go of the boy. The boy then begins to push the man, saying, “Now I’m just defending myself.”

The boy also tells the off-duty officer that his dad is a cop.

The off-duty officer claims that the boy threatened to shoot him, a claim that the boy and his friends vehemently deny.

The man continues to hold the boy against his will, dragging him closer to his home while other teens follow, concerned about the safety of their friend. The boy the man is holding remains mostly calm, asking that he let him go and reminding him that he is detaining a child, not a man.

Eventually, some of the teens moved in to force the man to let go of the 13-year-old boy before the off-duty officer pulled his firearm from his waist, brandished it, and then discharged it near the boy he was holding.

The 13-year-old boy and one of the other teens, a 15-year-old, was arrested. The officer was not.