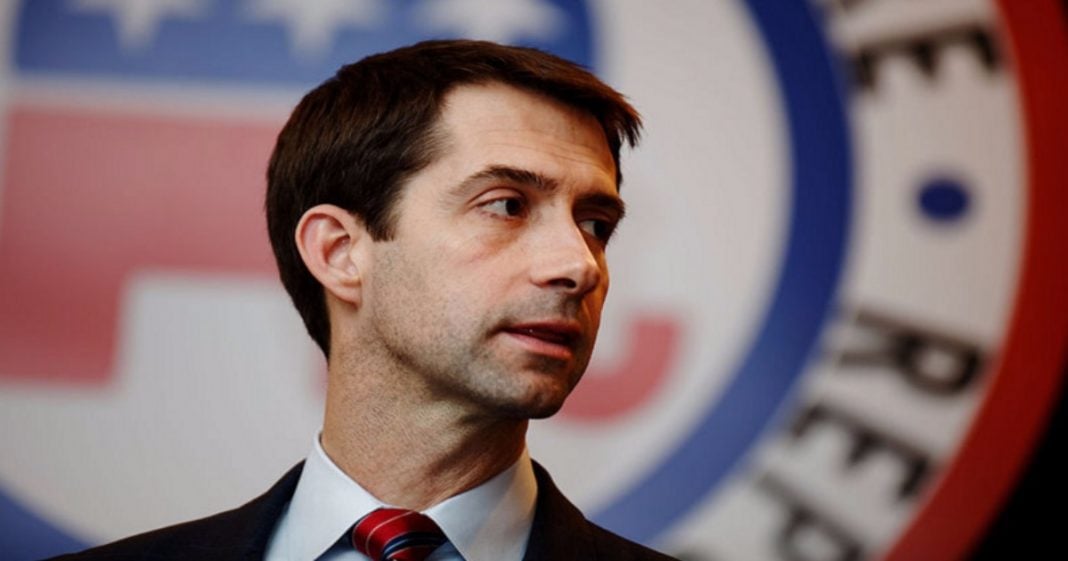 During a town hall meeting in his home state of Arkansas on Wednesday, Republican Senator Tom Cotton faced a largely hostile crowd. He was peppered with pointed questions tackling everything from PBS funding, to Trump’s refugee ban, to paid protesters.

But, it was an emotional audience member that stole the show. On the verge of tears, Cotton’s constituent said,

“I can tell you three members of my family, including me, that would be dead, dead, and homeless if it was not for ACA. I am an angry constituent. You work for us.”

Her impassioned plea, which has been retweeted thousands of times, was highlighted by a simple question, “what kind of insurance do you have?” Sen. Cotton did not answer.

That question is one that highlights the disparity and disconnect that citizens are continually faced with when attempting to relate to their elected officials. A Senator, like Tom Cotton, will likely never face the struggle of growing medical debt and shrinking coverage. According to adjusted data from the Census Bureau, the average American household has an income of $55,775. Sen. Cotton, on the other hand, makes $174,000 annually. While her income is not public knowledge, Sen. Cotton’s wife is an attorney in Virginia. They are hardly in the same situation as the average American family.

As far as insurance coverage goes, a provision of the Affordable Care Act does require that Congress Members and their staff buy their coverage through an ACA exchange. However, like many companies, the Federal government does contribute greatly toward insurance costs. According to a report prepared for members of Congress, “the employer contribution is set at 72 percent of the weighted average of all FEHB plan premiums, not to exceed 75% of any given plan’s premium.”

While the 57 or so plans largely vary, the average FEHB family plan works out to around $209 per month and a Congressman would be expected to pay just $37 per month. That works out to less than 0.2 percent of the average Congressional salary.

According to statistics from the Milliman Medical Index, the average American family that is covered by employer sponsored plan spends $6,717 annually on premiums. That expenditure marks 12 percent of the average household’s income. That is of course, ONLY if your employer contributes to your health plan, which is a luxury not afforded to millions of Americans. It also does not take into account deductibles and other out of pocket costs.

So, when Congress talks about repealing the Affordable Care Act without a plan for replacing it, it could very well mean life or death to the 20 million Americans who would be uninsured without the plan.

Every time your Federal officials say that they understand your concerns, remind them that they pay, on average, less than half of a percent of their income for health coverage. While, I’m not saying the Affordable Care Act doesn’t need to be overhauled, we need to make sure that we don’t forget the reason it was created: too many Americans could not effectively access healthcare.