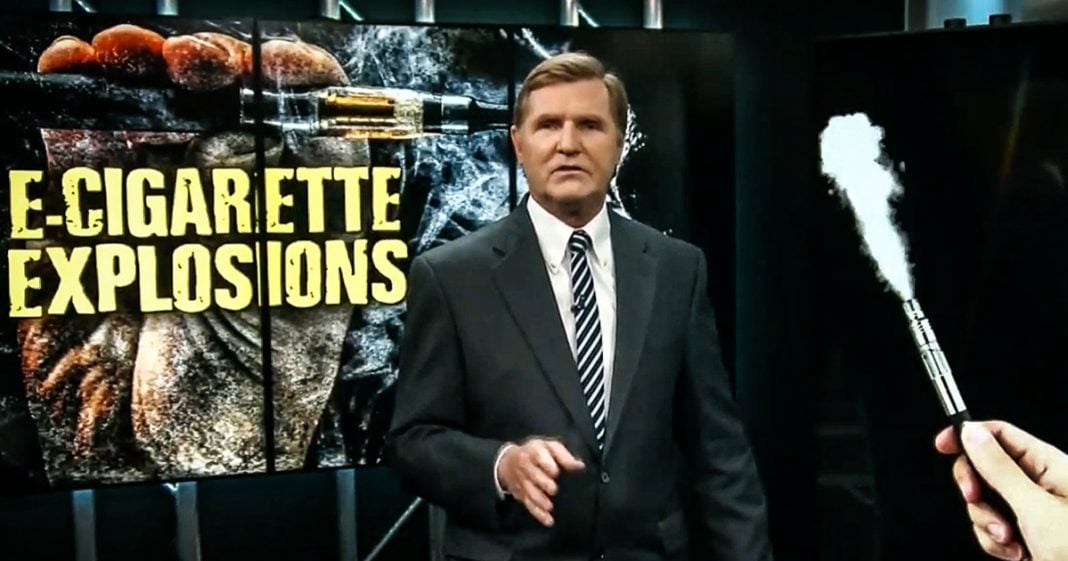 E-cigarettes are devices designed to deliver nicotine to the user without ever having to light up a conventional cigarette. These devices were first patented in 2003, and they’ve been available for sale in the US since 2007. Manufacturers of these products advertise them as safe, safer than traditional forms of smoking, as a way to actually quit smoking is their pitch. Right now, the jury is still out on the long-term health effects from e-cigarettes.

But, what we’re focusing on today are the lawsuits being filed against the manufacturers of e-cigarettes because the lithium-ion batteries in the devices have been known to explode during normal use and during the time that you’re charging the batteries. 80% of the fires with e-cigarettes occur while the device is being charged in the USB port.

Papantonio: E-cigarettes are devices designed to deliver nicotine to the user without ever having to light up a conventional cigarette. These devices were first patented in 2003, and they’ve been available for sale in the US since 2007. Manufacturers of these products advertise them as safe, safer than traditional forms of smoking, as a way to actually quit smoking is their pitch. Right now, the jury is still out on the long-term health effects from e-cigarettes.

Recent studies though have shown a link between the use of e-cigarettes in a very serious irreversible lung disease known as popcorn lung. The lung disease is the result of e-cigarettes being flavored with a chemical that can cause scarring of the air sacs in the lungs that result in thickening and narrowing of the airways. Symptoms of popcorn lung include coughing, wheezing and shortness of breath similar to the symptoms of COPD.

But, what we’re focusing on today are the lawsuits being filed against the manufacturers of e-cigarettes because the lithium-ion batteries in the devices have been known to explode during normal use and during the time that you’re charging the batteries. 80% of the fires with e-cigarettes occur while the device is being charged in the USB port. The problem stems from the fact that different USB ports put out different levels of voltage and current which can cause the battery in e-cigarettes to overheat. This overheating triggers a reaction that’s been called the thermal runaway. Once this reaction begins, there’s nothing that can be done to stop it. This thermal runaway creates a super heated explosion that caused second to third degree burns and, in some cases, the e-cigarette explosions have caused bone fractures, and muscle damage, and even blindness. You need to understand that these aren’t just small sparks we’re talking about. They’re full throttle explosions.

According to report by FEMA in 2014, these devices essentially became missiles with an explosive impact. The FEMA document states e-cigarettes are more likely than other products with lithium-ion batteries to behave like flaming rockets when a battery fails. That’s their words. And, just like real rockets and missiles, the explosions created by these e-cigarettes, the batteries, they can be devastating. In 2012, a man in Florida had e-cigarette explode in his mouth shattering most of his teeth and blowing off a portion of his tongue. In December 2016, an e-cigarette device exploded in a man’s pocket while he was riding on a bus in California. The explosion caused third degree burns and that seems to be a repetitive problem that we’re seeing here. In January of this year, an Idaho man had an e-cigarette blow up knocking out seven of his teeth leaving second degree burns on his face. It also shattered his bathroom sink when the exploding device flew onto this counter.

The FDA has documented more than 130 incidents of battery explosions since these devices were brought onto the market. Unfortunately, it wasn’t until 2016 that the FDA even acquired the authority to regulate these devices. The formal science based public hearings aren’t even set to begin until April 2017. This problem will only become worse as the use of these devices continue to grow. More than three million middle and high school students used e-cigarettes in 2015 making these devices the most utilized tobacco product among kids. Nearly 4% of adults in the US regularly use e-cigarettes. The growing use can be attributed to both the number of people using the devices to quit smoking traditional tobacco and because of the aggressive marketing campaigns that big tobacco is using to sell e-cigarettes.

Joining me now to discuss the problem with e-cigarettes is Atty. Andy Mcgraw. Andy, tell us why the lithium-ion batteries in e-cigarettes are so prone to explosions and why are they more dangerous than other devices that use these kinds of batteries.

McGraw: Well, sure. First, thanks for having me on the show, Mike. Now, lots of devices have these lithium-ion batteries. They’re known for packing a lot of power into a very small space: laptops, cellphones, lots of devices use these. But, lithium-ion batteries in e-cigarettes are specifically dangerous because of the shape that they’re in. The cylinder can actually act as a rocket when, as you’re talking about, the thermal runaway starts, the end of the cylindrical battery can rupture, and the material inside of this battery basically can ignite acting, like you said, just like a rocket. When that happens, these devices act like bullets and rockets, and they will cause catastrophic damage when used either in somebody’s face or even being stored in the pocket or backpack. The shape of these ion batteries-

Papantonio: Andy, let me ask you this. Considering the relatively small pool of victims, 134, the FDA has recognized, now that doesn’t mean that’s all, but they’ve recognized that versus the nine million regular adult users of these devices, is it possible that these incidents can be attributed to user error? Isn’t that what we’re going to be hearing from this company, the companies that make this product that, by the way, happen to be the same people that sold us tobacco and killed millions of people with tobacco and now they’re moving to this product? Talk to us about this defense that we’re going to hear. Well, gee whiz, it wasn’t our product. It happened because the dummy didn’t use the product right. Isn’t that what we’re going to hear and what’s your response to that?

McGraw: Well, first of all, I think that there’s a concern that these are being severely under reported. The number could be much, much higher than that. If you talk to hospital or professionals, they will tell you that. But, with regards to user error, that is a response to a lot of manufacturers, a lot of the retailers that they say that they’re not being stored properly. They’re not being charged properly. And, the people who are using these batteries, it’s their fault, but that can be the cause of some of them, but the number of explosions that are existing can also be attributed to the manufacturing of the product. A lot of these batteries are made overseas. They’re made in China where the production may not be the same quality as other places as well as the materials of the battery. The production and the materials also cause a very high rate of failure with these, so it cannot just be by reflected by user error, or improper charging, or improper storage of these batteries.

Papantonio: Okay. There’s currently litigation against the makers of these devices because of these explosions. Can you tell us what the status of the lawsuits are? Before you do though, did I get it right about the fact that people have had their tongues blown off, the teeth blown out of their mouth? They’ve been partially blinded. Are those the facts that you’re seeing as you review these cases?

McGraw: Yes, absolutely. Although these don’t fail incredibly often, when they do, the effect are catastrophic. They go off in people’s cars. They set cars on fire. They go off in people’s houses. They set houses on fire. They go off in pockets causing severe burns to legs. When they do go off in use, they can destroy teeth. They can destroy parts of people’s tongue. They can break jaws. One individual had his neck broken due to the force of the impact. These are not small explosions. These are serious, serious malfunctions when these devices do explode. You’re exactly right in that. Those are some major, major-

Papantonio: What is the status right now of these lawsuits? You have probably a handful of people throughout the country that typically go after these corporations, that have the ability to go after these corporations. I mean, a lot of people collect cases but you got to have lawyers that actually can do something once they have them. What is the status of all of that nationally as far as lawsuits?

McGraw: There are dozens of lawsuits pending right now. As I stated earlier, part of the problem is the batteries themselves that are failing, and malfunctioning, and exploding, a lot of them are made in China and it’s very difficult to go against them, but people are suing the manufacturers of the cigarettes. They’re suing the retailers for not advising them of the dangers of using these lithium-ion batteries and these devices. There are dozens of lawsuits across the country, again, based on the catastrophic injuries that people are suffering, and those are the people that they’re suing. They’re suing the manufacturers.

Papantonio: Okay. Andy, think of the irony of that. Here you have the companies that killed millions of people and they say, “Oh, we’ve got to wait. We know we addicted you to the product. We had plans.” I know you’ve seen the documents, too, where they lay out step by step how they’re going to go about addicting children. They focused on children, 15 to 16 year olds. How do we addict the child? We’ve handled those cases. Now, we have them saying, “Gee whiz, we got you addicted. Now, we want to make a product that’s going to get you unaddicted.” Unfortunately the product that they’re making to get you unaddicted has the ability to blow your face off. That is kind of what the scenario is here, isn’t it? What’s your take?

McGraw: Absolutely. The statistic I saw, I think, according to the CDC was between 2011 and 2015. The use of these devices by high school students increased 900%. The advertising that these companies are putting forward into these between 2011, the advertising expenditure was about 6.4 million. In 2015, the advertising, excuse me, they exploded to $115 million. That time the use in high school students and in middle school students skyrocketed. These tobacco companies, they’re still advertising these products using the sex appeal, using the rebellion aspect, using the individuality aspect of it. All of the same kind of tactics and techniques that they use to sell original cigarettes they’re using again.

Papantonio: Andy, I can tell you firsthand since I handled the tobacco litigation, we saw the CEOs, 12 of them stand up, raised their right hand and lie to congress. They’re going to do the same here. It’s going to be a tough lawsuit. I hope you’ll hang in there and do something about it, okay?