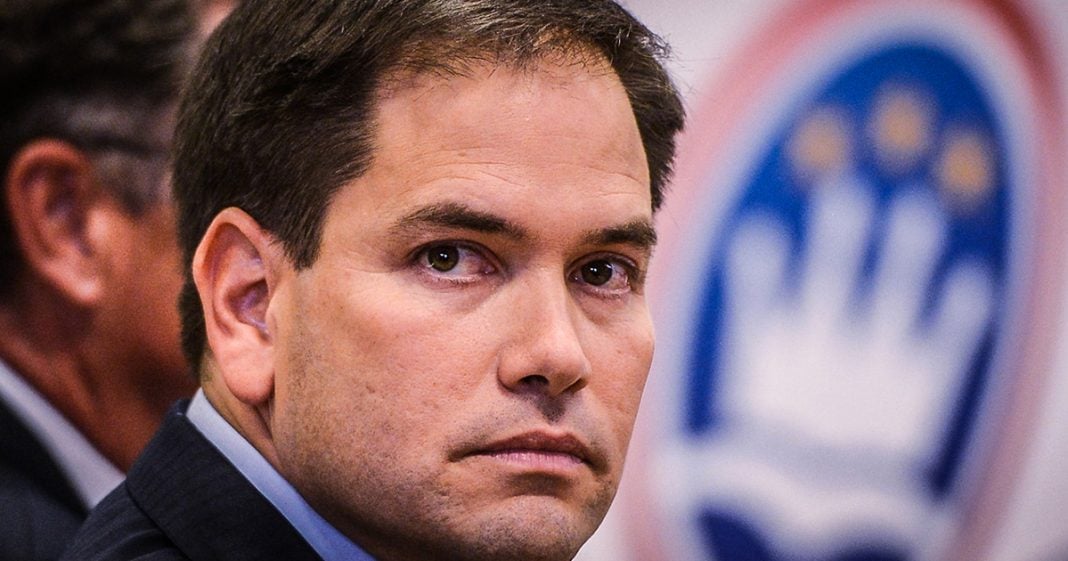 Republican Senator Marco Rubio’s office has said that he will not attend any town hall events because of the “hostile atmosphere” that is being created by those darn people who simply want answers.  Marco Rubio is a coward – he has no problem stripping away your rights and your benefits from the safety of Washington, D.C., but he wouldn’t dare look you in the eye to tell you what he’s doing to your life. Ring of Fire’s Farron Cousins discusses this.

Republican senator from Florida, Marco Rubio, is a coward. I say that because he is one of the few republicans that has absolutely refused to hold any kind of Town Hall meeting with his constituents to talk about the fact that he wants to take away their rights and take away anything else that they may have going for them. Their benefits. Their health insurance. Medicare, Social Security. Marco Rubio is different because it’s not just that he’s not holding meetings. He was invited several times, to do a Town Hall in Tampa, by the group Indivisible. They never responded.

Then, a few days before the event was supposed to take place, Rubio puts on Twitter that he’s going to be out of the country for a little while. Sure. Fine. I’m sure he’s got meetings and other diplomatic stuff to go do. I don’t think he left the country to run away from his constituents but I wouldn’t put it past him. It’s what Rubio’s staff told the people at Indivisible putting on this Town Hall. It’s what they told them that makes Marco Rubio such a coward. They said that Rubio would not do any Town Hall sponsored by this group or any other group because of the hostile environment that’s being created and fostered at these town Hall Events.

The Rubio staffer then proceeded to tell the Indivisible group that, “We’ve got ahold of your book and it says that people need to be persistent when asking questions and not give up the microphone until they’re satisfied with the answer.” Does that sound like agitation or does that just sound like somebody that wants a freaking answer? That’s what you’re supposed to do. Does Marco Rubio, the snowflake, need a safe space? Huh? Republicans are all about saying, “Oh, whiny liberals need their safe space.”

Hell, maybe he’s doing it just to avoid his constituents. He’s that much of a coward, I could see that happening. If you think that the American public is going to back down just because you need your little safe space, you better think again, buddy. This is only going to get worse for you. The longer you continue to refuse to talk to your constituents, the worse it’s going to get from you. To be honest, I hope it does.

I hope when your plane lands back in the united States, you’re greeted with a throng of angry protestors demanding that you tell the why you want to take away their healthcare, demanding that you answer why you won’t ask for Donald Trump’s tax returns or why you won’t investigate the potentially illegal business dealings of the Trump Administration. You’re going to have to answer those questions sooner or later, buddy, so you may as well go ahead and get your answers ready.