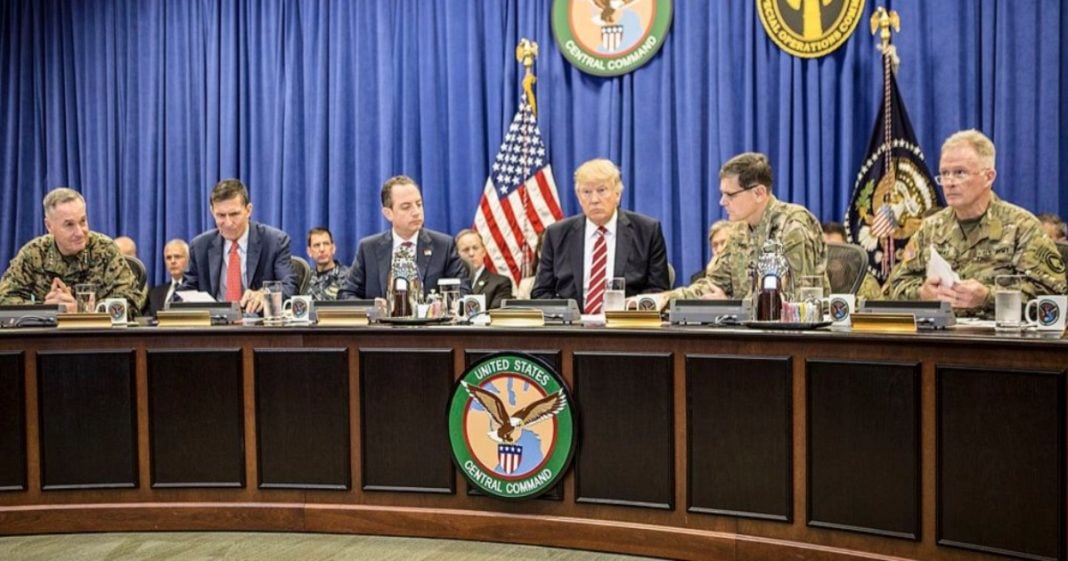 Meeting with key manufacturing CEOs at the White House today, Donald Trump couldn’t stick to the topic of job creation as he couldn’t resist bragging about the aggressive nature of his efforts to curb criminal activity by undocumented immigrants coming from Mexico, even as advisers tried to downplay such talk. Trump boasted,

“You see what’s happening at the border. All of a sudden, for the first time, we’re getting gang members out, we’re getting drug lords out. We’re getting really bad dudes out of this country, and at a rate that nobody’s ever seen before, and they’re the bad ones.

And it’s a military operation, because what has been allowed to come into our country, when you see gang violence, and you’ve read about like never before all of the things, much of that is people that are here illegally, and they’re rough and they’re tough, but they’re not tough like our people. So we’re getting them out.”

These comments add fuel to persistent rumblings that the administration is preparing to use National Guard troops to help in Trump’s war on undocumented immigrants, despite constant denials by Trump’s cabinet. Ring of Fire’s Farron Cousins tackled the origin of the rumors in a video piece last week.

White House Press Secretary Sean Spicer is already trying to pivot Trump’s comments. Spicer told White House reporters that the President was simply using the word “military” as an adjective to describe the “precision” and “flawless manner” in which the “bad dudes” have been taken out. Meanwhile, other members of the administration are scrambling to correct Trump’s remarks.

While in Mexico City with Secretary of State Rex Tillerson, Homeland Security head John Kelly had to repeatedly reject Trump’s claims. “There will be no use of military forces in immigration,” Kelly said several times in succession. Further asking the press to not misquote him Kelly begged, “at least half of you try to get that right.”

Tillerson and Kelly were in Mexico to meet with leaders in an attempt to show greater cooperation. Instead, they faced continued scrutiny over Trump’s comments and actions on trade and immigration.

These inconsistencies further highlight the lack of solidarity between Trump and his top advisers. This week, sources told CNN that Education Secretary Betsy DeVos stood against Trump’s rollback of transgender protections in public schools. Her opposition lead to a meeting with Attorney General Jeff Sessions and the President, pressuring her to reconsider her stance. By Wednesday night, DeVos was on board with the Trump measure, at least in the eye of the media. When asked about the potential rift in the President’s cabinet, Spicer denied that the members ever had any “daylight” between them.

Infighting within the administration seems to be a regular occurrence, with administration officials having to do damage control whenever the President speaks. This leaves many questions regarding Trump’s effectiveness in implementing policy. Without the support of his appointed advisers, Trump looks more and more like a reality TV star and less like a president. If the president is more concerned with attention on Twitter and in the media, who is actually tending to the day-to-day demands of the office?