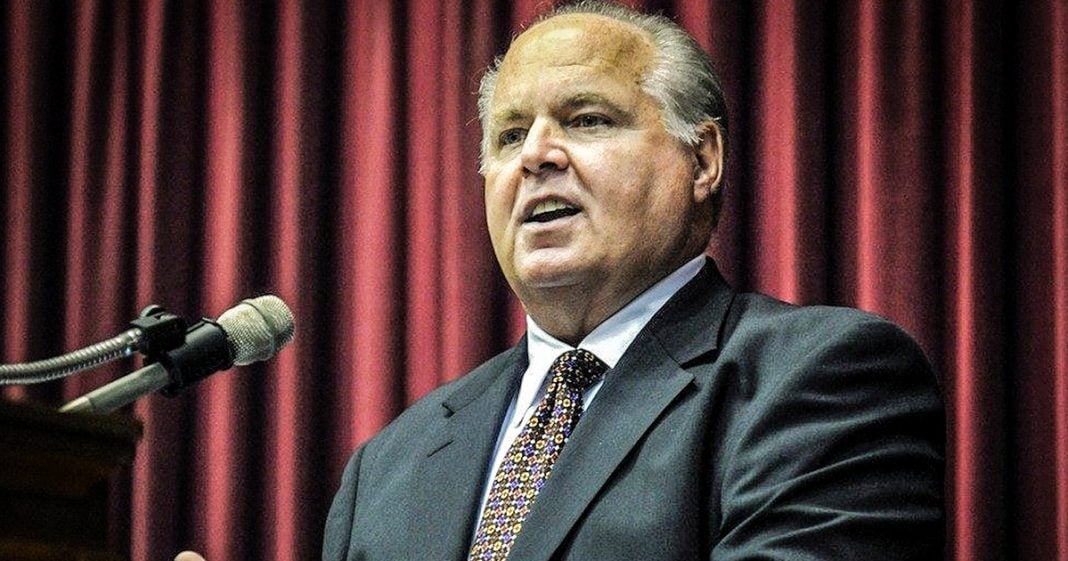 There’s a lot of nonsensical voices on the Right these days, but the founder of right wing hate talk – Rush Limbaugh – wants to remind everyone that he’s the King of Crazytown.  This week, he claimed that Barack Obama “got everything he wanted” during his presidency because he’s black, and opponents were too scared of being labeled “racist” for opposing him. Ring of Fire’s Farron Cousins discusses this.

Rush Limbaugh is basically the founder of right wing hate talk. But for the last few years he’s kind of lost his place as the leader of the pack. Fox News came about, kind of pushed Limbaugh aside. Then you had your Glenn Becks, your Sarah Palins, your Kellyanne Conways, your Ann Coulters. So, Rush Limbaugh really hasn’t been getting as much attention as he used to. That all changed this past weekend when Rush Limbaugh appeared on Fox News’s Sunday with Chris Wallace, where he said that President Barack Obama got everything that he ever wanted, at least during his first year in office, because he’s black.

Now, I don’t know what reality Rush Limbaugh is living in right now, but I want to go to that reality. I want to live in a world where Barack Obama was able to accomplish everything that he wanted to accomplish, where we have a universal healthcare system as was originally included in the very first draft of the Affordable Care Act. I want to go to a reality where we have completely clean air, and clean water, and a clean environment, and renewable energy sources. I want to live in that reality where we have tough regulations on Wall Street that allow them to operate without breaking the law and screwing over consumers, but without hindering their operations as well. Smart regulations, that’s the reality I want to live in. Apparently, that’s the reality that Rush Limbaugh’s living in.

As best I can remember, we had the most obstructionist Republican Party in the history of the United States Congress. They allowed fewer bills to be passed than at any point in at least the last hundred years. Now, during Barack Obama’s first year in office, he did have Democratic majorities in both the House and the Senate. They still weren’t able to do everything that they wanted to do. Then for the remainder of Obama’s terms, the Republicans blocked nearly every single effort that this man put forward, that the Democrats put forward, mostly because they wanted to oppose a black president.

Now, Limbaugh, in his interview with Chris Wallace, said that the reason Republicans rolled over for Obama in that first year is because they didn’t want to get labeled as racist, or whatever, according to Limbaugh. It didn’t stop them. They still did this. Limbaugh is absolutely lying. They hated everything that Barack Obama and the Democratic Party did. They didn’t want a single piece of legislation that this man supported or that the Democratic Party supported to make its way through Congress. They were successful with that. That led to Barack Obama being the one who continuously rolled over and allowed the Republicans to rule from the House and the Senate.

Limbaugh, to say that he got what he wanted because he’s black, not only is it that hugely racist, but it’s completely untrue. The man got nothing that he wanted. The original version of the Affordable Care Act that included a single payer option was scrapped by Republicans and the healthcare industry. They were the minority, and they managed to water down this bill so much that it became something that really isn’t all that helpful. Yes, it does mandate coverage for people with preexisting conditions, that’s a great start. And that’s about it. It’s better than nothing, don’t get me wrong, we need this, but it could’ve been amazing if Republicans had just done their job. If people like Rush Limbaugh weren’t out there every single day saying, “I hope he fails.” Do you remember when Rush Limbaugh said those words when Barack Obama first took office? “I hope he fails.”

So no, Limbaugh, he didn’t get everything he wanted, and it certainly wasn’t because he’s black. He worked his ass off throughout his entire life to get where he was. Whether or not you liked the job he did as a president, you have to admire that. The color of his skin doesn’t necessarily matter. That doesn’t determine someone’s success. Barack Obama was a very smart man, a very good husband, a very good father, a mediocre president, just in terms of what he was able to accomplish. He’ll probably go down in history as much better than that. Meanwhile, you are going to go down in history as probably one of the most hateful human beings in American history.