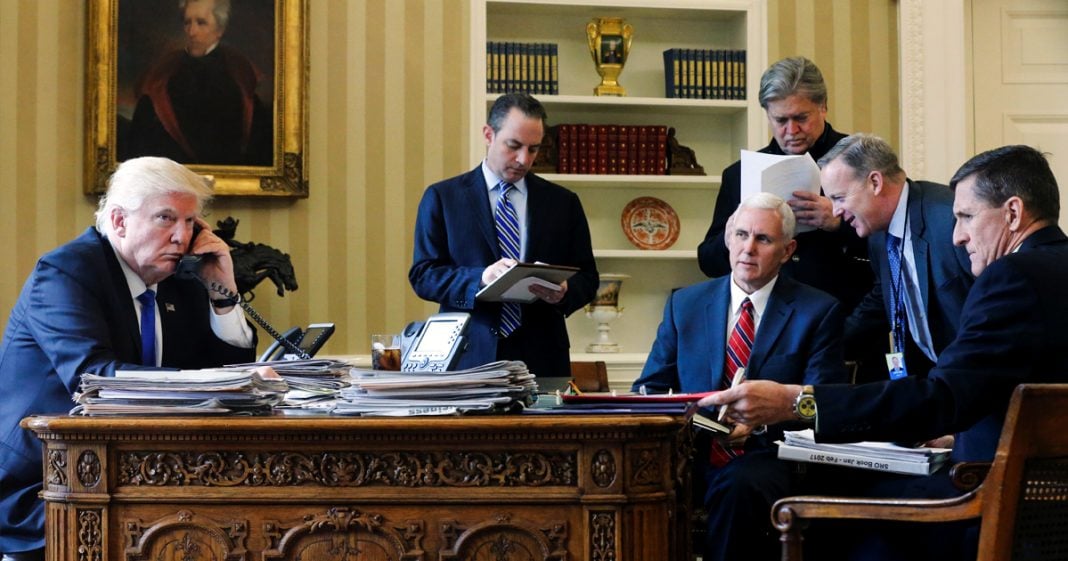 Sam: Heather, when we broke, you told us about Don McGahn. This is a guy who I think you can describe what Scott Pruitt is to the Environmental Protection Agency in that his whole experience when it comes to environmental law is fighting against the Environmental Protection Agency’s ability to carry out that law, to figure out how to disempower the protection of the environment. What Scott Pruitt is to that agency is what Don McGahn is to the idea of ethics in Washington. He was a very odd choice to be White House counsel. He is the guy who supposedly heard from acting Attorney General Sally Yates that you may have a problem with this Michael Flynn because he’s lying. He may very well have lied to the FBI, and he apparently lied ultimately to Mike Pence.

Don McGahn either sat on the information in what would have been an unprecedented decision I think amongst the White House counsel, or told Mike Pence and Donald Trump about it and then nobody seem to care for about three or four weeks until the Washington Post reported this is happening. We have this White House which is in chaos. Right? There’s still stories earlier this week on Breitbart, which is of course Steve Bannon’s mouthpiece, saying that, ‘Flynn is gone. Reince Priebus may be next.’ I mean, this is like the red wedding that’s going on there.

Digby: I had not thought of that, but that’s an excellent metaphor for what’s happening. I was struck by this. I wrote a piece for Salon on Tuesday. On Monday, I get the New York Times at home. I opened it up and looked at the front page, and there’s a gigantic story on there about the Trump boys, you know, Don Jr. and Eric and what they’re doing with the Trump organization since Trump has assumed office. It’s a huge, huge story about them violating everything that they said they were going to do. They’re still doing deals overseas. They’re making tons of money hand over fist. They’re attending meetings at the White House. They’re arrogantly just running around saying, ‘What are you going to do about it?’ The Trump organization is obviously benefiting from its connection to the President of the United States, and not surprisingly. Right?

We hear about the small stuff like people at Mar-a-Lago. They upped the membership fee to $200,000 a year, and these people get to go rub elbows with the President, and as they did last week take pictures of the President having a sort of makeshift Situation Room with the Japanese Prime Minister on the patio, and then posted on Facebook. This is the kind of access, direct bought access, that I think we’ve never seen before. In any normal administration, this would be the scandal of the century. I mean, it’s unprecedented. Nobody has ever seen anything like this.

This is a big front page, above-the-fold, story with pictures of Don and Eric and everything, and nobody paid attention. It just dropped like a stone. Not because I think people didn’t care, or that it wasn’t a good story or well reported. There’s just so much going on. In the meantime, we’ve got the National Security Advisor being suspected of maybe selling out the country to Russia, and you’ve got an upheaval within the White House that is unbelievable. You’ve got the mouthpieces fighting one another basically to seize the storyline. You have a guy named Stephen Miller, a 30-year-old, very, very scary little budding fascist running around on TV on Sunday telling everybody that the world would soon know that the President cannot be opposed. There’s this craziness happening.

Sam: Not to mention that there are busloads of fake voters going from Massachusetts to New Hampshire. Right?

Digby: Meanwhile, they’re deporting people by the hundreds. There’s the Muslim ban, there’s Trump’s attack on the judiciary. It’s overwhelming to the point where … I think that this is one of those shock doctrine moments where there’s so much going on that the Trump organization is just simply moving in and like sharks they’re taking advantage of the moment, and they are going to come out of this thing very, very rich. There was one little deviation from that where poor Ivanka and her little clothing line was … It turns out that women don’t really want to buy Ivanka’s stuff because it kind of makes them sick to wear the Trump name I think. Some of these department stores are dropping her line.

Kellyanne Conway, the Presidential Advisor went on TV standing in front of the Presidential Seal and shilled for the line, saying everybody should go out and buy some. That caused a bit of a ripple that maybe that’s not quite unethical. Compared to what the boys and the Trump organization are doing, it’s just a joke. They are essentially running around the world, running all over the country. They are being sated like little princes that they are. They are going to come out of this very, very rich.

Sam: Here’s the thing that really scares me about this. On one hand, look, obviously ill-gotten gains, and these are not people that I personally have any affection for, but that the Trumps would enrich themselves from this, that was something I accepted on day -32 I guess, or whatever it was. My concern is that with all of this insanity going around there, things like Steve Mnuchin, the foreclosure fraud king, who got confirmed this week is now our Treasury Secretary. I don’t know if you can find five words written about it this week.

My fear is down the road, the Republicans who should be owning all of this, are going to be able to fly under the radar and God knows do what in terms of legislation because of the insanity that is coming out of this administration. That is I think going to be one of the big challenges not just for folks like you and I and for the mainstream media and the corporate media, but also for our listeners and our readers so that they can keep on eye on the things that are little bit less sensational, but in some ways far most devastating to the fabric of our society. Things like healthcare. Things like food stamps. Things like services for special needs kids in schools. The list goes on and on. It is a time where we really need to conscious of what our government does for our people, and be conscious of how that is being attacked.