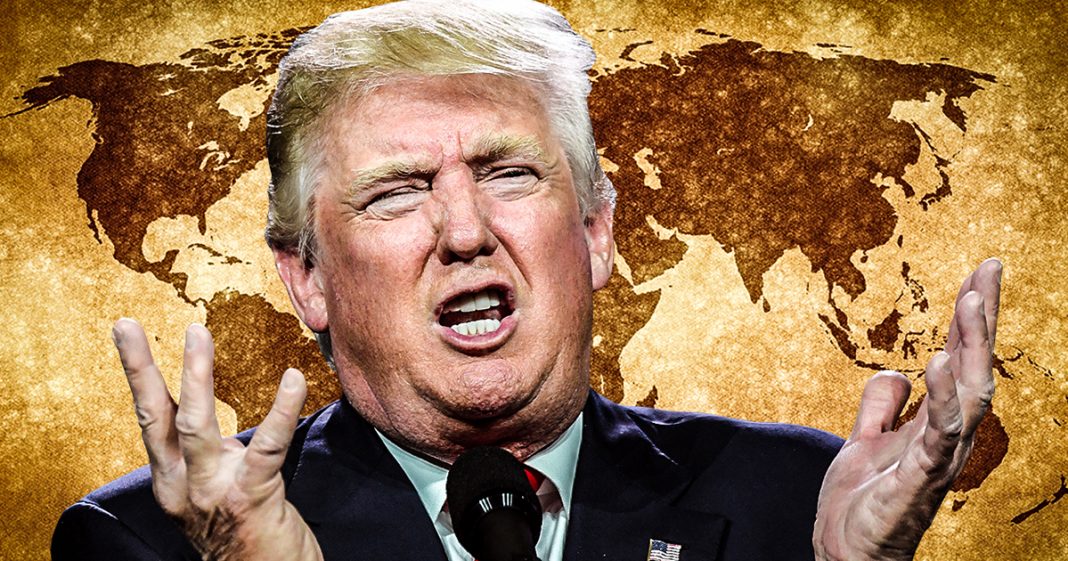 Over the weekend, Donald Trump claimed that there were terrorist attacks “last night” in Sweden, and was swiftly lampooned by the media for completely fabricating the story.  But, two days later, riots took place in a Swedish neighborhood comprised of mostly immigrants after a drug bust went sour, and the media was loathe to report it for fear of confirming Trump’s statements.  But there is some important context to take into consideration before jumping on the immigrant-bashing bandwagon, and that’s what the media should be talking about. Ring of Fire’s Farron Cousins discusses this.

Sweden has been in the news for the last several days, most importantly because Donald Trump paid a tribute, I guess, to the terrorist attack that happened in Sweden a few nights ago that he saw on Fox News. Well, as it turns out, Fox was actually showing an old clip, a clip that had appeared to be doctored of something that happened in Sweden a while back. Donald Trump watched this, assumed it was real time, and came out and talked about the terrorist attack that just happened in Sweden. Well, he was rightfully castigated by the US media, by people on Twitter and Facebook, people changing their Facebook pictures to “I stand with Sweden”, people checking in safe in Sweden, because no, there were not any terrorist attacks in Sweden.

Now, before we go any further, let’s point out that Donald Trump literally got his foreign policy news from Fox. He didn’t get it from his advisors, he didn’t get it from the intelligence community. He got it from Fox News. Now, don’t you think that a sitting president, before going out and saying something stupid, should have checked with someone? You know, not just what the television box says. He could have picked up the phone and literally called any one in the planet, but he didn’t. He decided to go out and say, “We stand with Sweden. We’re so sorry about your terrorist attack and that proves why we need tough immigration laws in the United States.”

Then, this is the third terrorist attack that the Trump administration has made up. There was Bowling Green from Kellyanne Conway, Atlanta from Sean Spicer, and now Sweden from Donald Trump. Now, here’s where the story takes a little bit of an interesting turn. Monday night there were riots in Sweden in a mostly immigrant neighborhood following a drug bust that apparently went sour. One officer did have to fire his firearm because he felt threatened, however, he did not hit anyone with it. As far as we’ve seen, there were no deaths. Two cars were set on fire and a couple shops were vandalized as a result of this drug bust by the Swedish police.

This was a mostly immigrant neighborhood. This was, by definition, a riot, but, it was not a terrorist attack. There were not mass deaths. There were not bombs going off. There was not a plot to do this in Sweden. This was the result of the police botching a drug bust. This does not vindicate Donald Trump. This does not prove that Donald Trump was right. All it shows is that the Swedish police screwed something up. If you want some more context into what’s happening in Sweden or what happened in the span of a few hours and then went away, this past weekend Trump was in Orange County, Florida. Orange County, Florida has a 50% higher murder rate than the entire country of Sweden. Did Donald Trump go out and talk about that? Did he talk about the American citizens committing these murders in the area that he likes to call his Southern White House? No, he didn’t.

He is using these attacks to attack immigrants, and that’s the only thing he is doing. To be honest, Trump made his statement about the terrorist attack two days before that riot even took place. This is disgusting, apprehendable behavior by this administration. This is disgusting, and we’re letting it happen. Another part of the story, though, is that the corporate media didn’t even want to cover the actual riot that happened in Sweden because they were afraid it was going to prove Donald Trump right, but it didn’t. That’s the other issue that we have with this administration. When you come forward and say that a terrorist attack happened when it didn’t happen, you lose credibility. You’re the administration that cried wolf. What happens when there is an actual terrorist attack, and you come out and tell us about it, and we just make fun of you because we don’t believe you because you’ve lost all your credibility?

For the love of God, really, there is a children’s book about this, about the consequences of doing this. Did nobody read that to you when you were a child, Donald? Or did anybody read that to you, Kellyanne Conway? I have a copy at my house, I will be more than happy to send it over to the White House and let you read it, and see what happens when you continue to push these phony attacks and what happens when something really happens. Nobody’s going to believe you. The Trump administration cannot continue these lies. They cannot continue to invent phony attacks to make us in the United States hate immigrants.

We have a real crime problem in the United States, but it’s not coming from the immigrants. It’s coming from white people. For the love of God, we had white armed men occupy a government office last year. They took over that wildlife refuge, the Bundy brothers. Now, imagine if we had seen that story play itself out in any other country of the world. If we got online or opened up our newspaper to see that separatists had taken over a government building in the United Kingdom, or had taken over a government building in Germany or France or Sweden, we would have said that, “Wow, this country is weak. They’re stupid for letting this happen. Why don’t they just go in and take these people out? This is absurd.”

Yet, we saw that in the United States. A bunch of white men with guns standing down federal officers to virtually no consequences. Same thing with the Bundy standoff in 2014. That man standing on a bridge, laying down actually, with his rifle pointed at federal agents. That man is still walking around free. Had that been a black man there wouldn’t have been anything left of him for the coroner to even identify. If Donald Trump wants to talk about the real threat to the United States he needs to go look in the mirror, and he needs to go look at the communities that he likes to call home, because that’s where the real crimes are taking place.