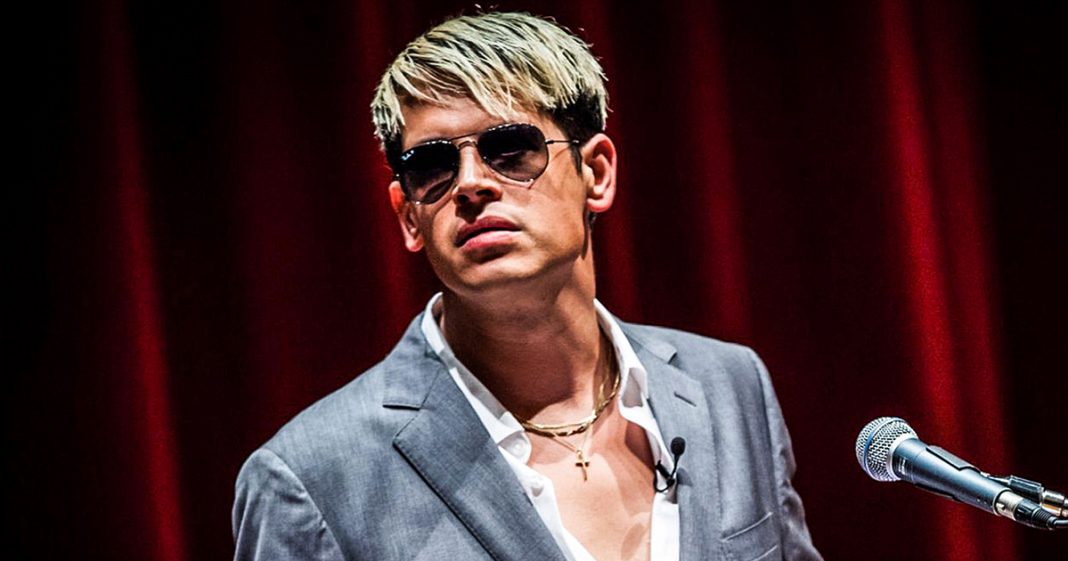 Milo Yiannopoulos, the former bright star of the Alt Right, has fallen from grace after a video emerged of him appearing to defend pedophilia as a great way for young boys to “discover who they are.”  Apparently the GOP is perfectly fine with sexism, racism, and anti-Semitism, but pedophilia is the breaking point. Ring of Fire’s Farron Cousins discusses this.

For about the last year, Milo Yiannopoulos from Breitbart has been the rising star among the alt right. Basically the rising star amongst all of the racist Republicans that helped to put Donald Trump in office. Well this past weekend, new audio/video from a podcast emerged that Yiannopoulos had done a while back, where Yiannopoulos told us that he believes people under the age of 16 in the United States, some teenagers should be legally allowed to consent to sex.

Essentially what Milo Yiannopoulos did here was say that he thinks that pedophilia in some cases is okay because anyone under the age of 16, by law if you engage in intercourse with them, consensual or not, it is considered pedophilia. You become a registered sex offender because that is against the 1956 sexual offenses act in the United Kingdom at least.

Here’s the thing, after this audio of Yiannopoulos surfaced, he lost his speaking position at this week’s CPAC convention. Shortly thereafter he lost his book deal with Simon and Schuster and as it stands right now is most likely, if he hasn’t already, going to actually lose his job at Breitbart News. Yiannopoulos in the span of three days has lost his entire future and deservedly so. There is no sympathy. There are no tears for this madman. He is a man who was banned from Twitter last year for sexist and racist attacks on the cast of Ghostbusters, the Ghostbusters reboot.

His whole career is built around essentially being the male version of Ann Coulter, just a little bit more extreme. Racism, sexism, anti-Semitism, you name it, this guy has done it all. To be honest for Republicans, up until the pedophilia comments, all of this was perfectly fine. In fact going back to those comments, Yiannopoulos actually said during that podcast that he thinks sex for 13, 12 year old boys is perfectly fine because it helps them discover who they are.

At that age of 12 or 13 a child, a teenager is not able to fully understand one the choice that they’re making and two any potential consequence from those choices. Yiannopoulos is dangerously misguided on this issue and he is a dangerous person, not just because of the pedophilia comments but because of the way he seems to hate any non-white person. Yes, it is good that Yiannopoulos has lost his future. He’s lost his book deal.

I am sure there’s some other right wing publisher that’s already talking to him right now. He’s going to write a book. He’s going to make millions off it because there’s enough hateful disgusting people in this country that are going to go out and buy it. They’re still going to listen to what this guy says, so he hasn’t lost everything. He’s still going to be around, this little cockroach is going to survive this nuclear storm that’s currently happening in his life, but he doesn’t deserve to.

Anyone like that, anyone who makes a career off of peddling hate in this country, or in any country, should not be given credence. They should not be given guest spots on Real Time with Bill Maher, where Bill Maher appeared to be best friends with Milo. This is the kind of guy that you ignore. This is the kind of guy that you don’t talk about, and I can promise you, this is going to be the only time that we actually address what this whack job did, because to be honest, beyond this he’s not worth our time.