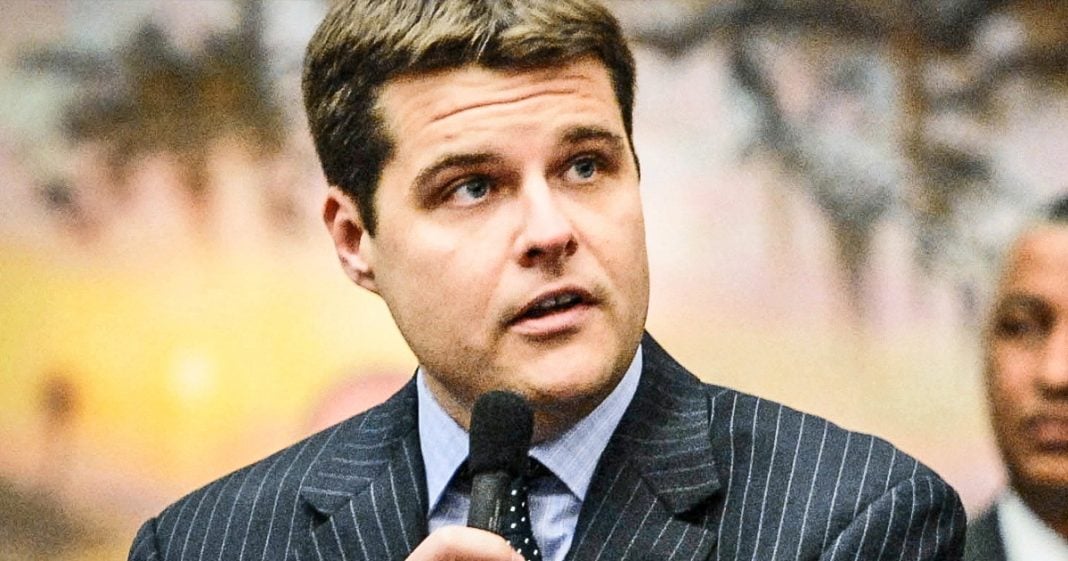 With Oklahoma Attorney General Scott Pruitt set to take over the EPA, many are very concerned that the agency’s going to be run by a man with close ties to the fossil fuel industry and who sued the EPA 13 times for over-regulating oil and gas. What’s not getting nearly as much coverage is the fact that some lawmakers want to eliminate the EPA altogether. Representative Matt Gaetz is one of them. You’ve probably never heard of him. Hopefully you never will, but he’s introduced the first draft of a bill calling for the agency’s termination.

Papantonio: With Oklahoma Attorney General Scott Pruitt set to take over the EPA, many are very concerned that the agency’s going to be run by a man with close ties to the fossil fuel industry and who sued the EPA 13 times for over-regulating oil and gas. What’s not getting nearly as much coverage is the fact that some lawmakers want to eliminate the EPA altogether. Representative Matt Gates is one of them. You’ve probably never heard of him. Hopefully you never will, but he’s introduced the first draft of a bill calling for the agency’s termination.

Here to discuss legal ramifications of destroying the EPA is Farron Cousins, executive editor of the Trial Lawyer magazine. Farron, what exactly would this process do? First of all, Matt Gates. No one’s ever heard of Matt Gates. Is this just a way for Matt Gates to put himself on the map somehow? What’s your take on this? It’s a crazy story.

Cousins: It really is. Unfortunately, Matt Gates actually represents my district here in Florida. He’s a freshman Congressman. He spent six years in the Florida State House of Representatives, where he didn’t really accomplish much. If you look back through his record as a state representative, I think he had about five or six bills that he wrote or co-sponsored that actually got passed. The rest of them died in committee.

Finally he makes it to the big leagues. He makes it to the U.S. House of Representatives, and he comes out of the gate with this bill that would literally abolish the Environmental Protection Agency, and instead of having a federal agency that oversees all environmental protections and environmental regulation enforcement, he wants to I guess give those powers to the states, maybe have the states try to step in and do this, something they’ve never done in the past, something they’re not capable of doing.

Papantonio: Farron, I’m having this term pushed around up there with this new set of Congressmen. They’re calling them political punks. They basically come with no real credentials. The political punk line is that here you got a guy like Gates. Nobody’s ever heard of him. Chances are nobody ever will hear of him, but this is his chance to get on the screen. Aren’t you seeing that across the board with a lot of these freshman Republicans coming through?

Cousins: Absolutely. That’s what they’re trying to do. They’re trying to jump on the Trump anti-government, anti-establishment bandwagon. What better way to do that for a freshman like Gates than to come out and say, “Let’s start literally dismantling agencies within the federal government?” Just this past Monday, Gates co-sponsored a piece of legislation to do away with the Department of Education. It’s the slash-and-burn mentality of these Republican freshmen and young Representatives, because they want people to see, “Look at me. Look at what I’m trying to do. Look that I’m trying to accomplish something.”

They think that is going to propel their careers even further, even though we’ve seen across the board, people do not want to get rid of entire government agencies. They may not like all the regulations, but they understand to an extent these regulations save people’s lives. They create standards by which everybody has to play by.

Papantonio: I just settled a case up in the Ohio Valley that had I not settled, a lot of those people were going to die of cancer, because their water was poisoned. I just settled it this week. Without the EPA, we probably couldn’t have handled that case. Give me your take on what happens if there’s no EPA. We continue to poison people? Matt Gates thinks it’s a great idea for children to drink water that’s poisoned. Matt Gates thinks that’s a good idea, and the people who signed on with him think that’s just fine, because it’s not their children. Until it happens to their children, it doesn’t matter. What’s your take on it?

Cousins: I agree 100%. States and cities do not have the financial resources necessary to go out and test the water. They do not have the manpower to have somebody go out and test the water. That’s why the federal government had to step in, create the EPA, issue the money out, and send employees out, and hire employees in cities and states across the country, so that we had someone out there protecting us, someone out there making sure that corporations were not just dumping into toxins into rivers, basically what we saw with the DuPont case that you’re referring to here.

We have to have that because states cannot afford it. States across the country are already struggling, most of them Republican-led states, because they want to cut taxes, reduce government revenue, so they have no money to spend.

Papantonio: Farron, over the years, you’ve written a lot about I’m going to call them the new term that they’re using up there is Republican political punks. You’ve called them other things, but the point is this. I guess we can get used to this. We’re going to see a lot of this. You’re going to have a lot to write about with the Trial Lawyer magazine, and we’re certainly going to have a lot to talk about here on America’s Lawyer. Thanks for joining me, Farron.